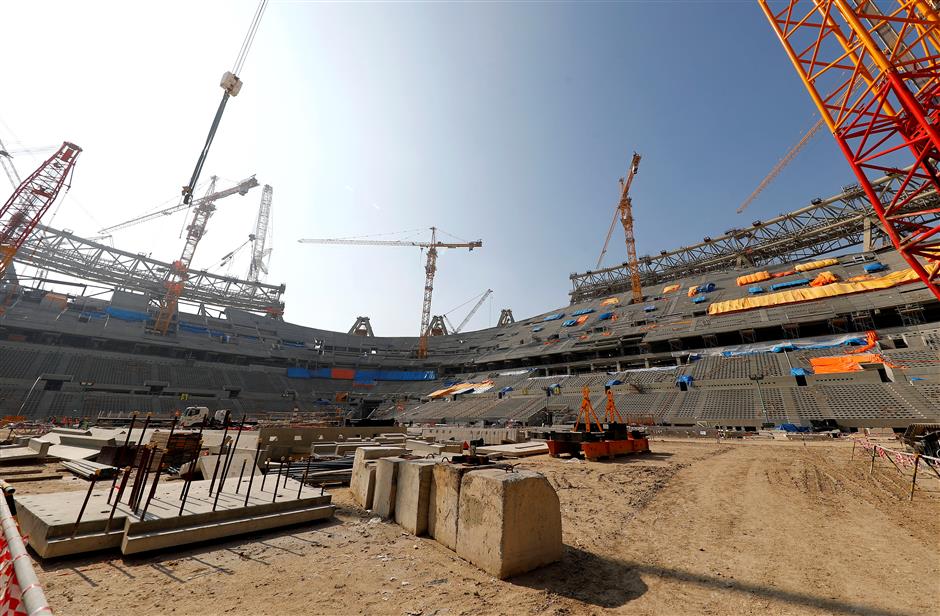 A general view shows the Lusail stadium which is under construction for the upcoming 2022 Fifa soccer World Cup during a stadium tour in Doha, Qatar, December 20, 2019.

FIFA and the Asian Football Confederation have agreed to postpone the Asian World Cup qualifying matches in March and June due to the coronavirus pandemic, the world soccer body said yesterday.

“Following consultation with Asia’s member associations, FIFA and the Asian Football Confederation have agreed to postpone the upcoming Asian qualifiers for the FIFA World Cup Qatar 2022,” FIFA said in a statement.

China’s matches against Maldives at home and Guam away were already moved to Buriram, Thailand, and were set to be played in an empty stadium, but more than two dozen other matches were scheduled around the continent on March 26 and 31.

A further 32 games were scheduled to be played during the second international break on June 4 and 9.

FIFA added that the matches could still go ahead if the member associations due to play each other mutually agree and safety standards are met, subject to prior approval from both FIFA and the AFC.

It added that upcoming qualifiers for the Olympic football tournaments were likely to be played as scheduled, with the exception of the women’s Olympic qualifiers playoff between South Korea and China. The playoff will now take place during the June 1-10 international window.

FIFA and the AFC also announced new dates for the AFC Futsal Championship in Turkmenistan, which was scheduled for February 26-March 8 and will now be held from August 5-16.

In another fallout, the BNP Paribas Open in Indian Wells, the most prestigious tennis event outside the Grand Slams and tour finals, was canceled on Sunday, over concerns about the spread of a coronavirus in Southern California.

“There is too great a risk, at this time, to the public health of the Riverside County area in holding a large gathering of this size,” said David Agus, a doctor at the University of Southern California, with whom tournament organizers consulted about the potential health impact.

The tournament, a Masters 1000 event that was set to start today, attracts the game’s top players from both the men’s and women’s sides and drew a record 475,000 fans over its two-week run last year.

Indian Wells organizers were prepared to look at the possibility of holding the tournament on another date, said tournament director Tommy Haas. “We are very disappointed that the tournament will not take place, but the health and safety of the local community, fans, players, volunteers, sponsors, employees, vendors, and everyone involved with the event is of paramount importance,” Haas said.

Steve Simon, WTA chairman and chief executive, supported the decision. “We understand the decision which has been made in the interest of public health and safety which is the top priority at this time,” he said in a statement.

Already some smaller tennis events in China and Italy — the two countries hardest hit by the virus — had been affected. The Miami Open, which follows Indian Wells later this month, could be in jeopardy. The year’s second Grand Slam, the French Open, is set to be played in Paris in May.