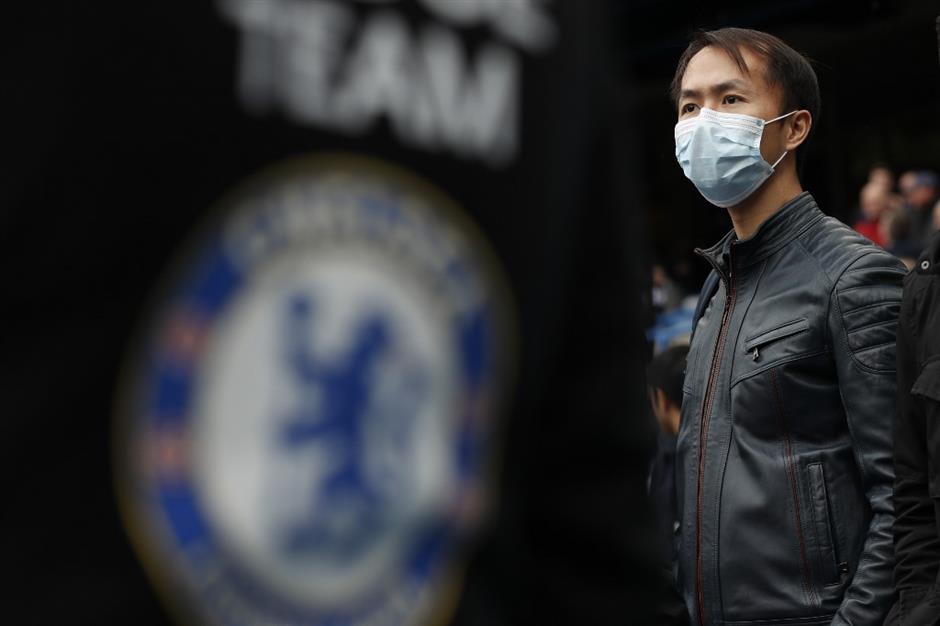 In this file photo taken on March 8, 2020, a Chelsea supporter wearing PPE (personal protective equipment), including a face mask as a precautionary measure against COVID-19, awaits kick off in the English Premier League football match between Chelsea and Everton at Stamford Bridge in London. Premier League clubs received a boost to their hopes of completing the season on Monday, May 11 as the government published a "roadmap" that could see the return of elite sport in England from June 1.

Premier League clubs face having to pay a huge refund to broadcasters even if they manage to complete the coronavirus-disrupted season behind closed doors.

Broadcasters would be reimbursed for matches not being played as scheduled and the lack of atmosphere in empty stadiums is also a factor.

The BBC reported the bill facing the English top-flight, which continued talks on "Project Restart" on Monday, could be as high as £340 million (US$420 million).

"We were able to update our clubs today on our situation with broadcasters, which is obviously confidential," said Premier League CEO Richard Masters.

"Whatever happens, there's going to be significant loss of revenue for clubs. That is inevitable.

The rebate to broadcasters would surge to an estimated £760 million if the season cannot be completed. Masters has previously warned of a £1 billion loss once the absence of gate receipts is taken into account.

For the first time on Monday, the 20 Premier League clubs discussed models that may have to be used to decide final standings if it is not deemed safe to resume.

New government guidelines have paved the way for elite sport to return behind closed doors in England from June 1.

However, England internationals Raheem Sterling and Danny Rose are the two latest high-profile players to raise their concerns over a return to contact sport when the rest of society is being advised to follow social-distancing guidelines.

"The moment we do go back it just needs to be a moment where it's not just for footballing reasons, it's safe for not just us footballers but the whole medical staff, referees," Sterling told his YouTube channel.

"(I am) not scared, but reserved and thinking what the worst outcome could be.

"I've had friends whose grandma has passed away, I've had family members as well that have passed away. You've got to be wise and take care of yourself and those around you."

British Prime Minister Boris Johnson said in parliament on Monday that the return of sport on TV would "provide a much-needed boost to national morale."

However, a YouGov poll revealed that 73 percent of 2,000 people surveyed said the return of the Premier League and English Football League would not lift their spirits.

Britain has been one of the worst-hit countries in the global pandemic, with the government officially recording more than 32,000 deaths from COVID-19.

"People's lives are at risk," Rose, who is on loan at Newcastle from Tottenham, told an Instagram live.

"Football shouldn't even be spoken about coming back until the numbers have dropped massively."

The Premier League are due to meet unions for players and managers later this week to discuss protocols for a return to group training.

"Safety comes first. We must listen to government, the authorities and the medical experts and continue to follow their advice," added Masters.

"That is exactly what we are doing. We are getting ourselves in the best position to resume the season, but only when the conditions are right."