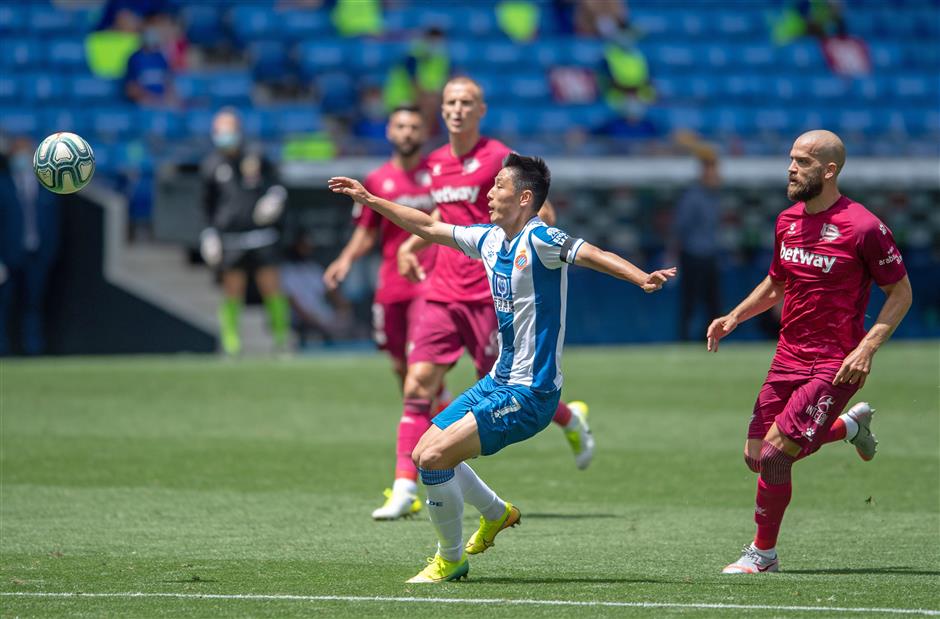 Chinese striker Wu Lei, who tested positive for coronavirus in March, scored on his first game back on Saturday as Espanyol sealed a morale-boosting 2-0 win over Alaves in La Liga.

Espanyol looked doomed to relegation as the team restarted six points adrift of safety after three months away but Wu's excellent performance has given it renewed hope of survival.

It marks a particularly impressive return for the 28-year-old, who was one of six Espanyol players to be diagnosed with the virus in March, with the Chinese football federation confirming Wu had "mild symptoms."

But he looked sharp at the empty RCDE Stadium. He hurried Alaves goalkeeper Fernandes Pacheco into a mistake in the 19th minute when, under pressure from Wu, he handled outside the box and was sent off.

Wu then had a goal ruled out for handball himself before applying a cool finish from a one-on-one early in the second half. In between, Bernardo Espinosa put Espanyol in front just before the break.

"He was decisive," said Espanyol coach Abelardo Fernandez when asked about Wu afterwards.

"He caused the sending off and he scored the second goal. He did everything we asked him to do, he stretched their defense. He did his job perfectly."

Wu joined Espanyol from Shanghai SIPG in January last year, when he said he wanted to prove China's best players could deliver at the highest level.

He has already scored 10 goals this season for the Catalonia-based club and in January became the first Chinese player to score against Barcelona in a 2-2 draw with the reigning Spanish champion.

Elsewhere, the Spanish league said on Sunday it will file criminal charges against the fan who ran onto the field during Barcelona’s match at RCD Mallorca.

Saturday’s match was played without fans but the youngster wearing an Argentina soccer jersey made it past security and took a photo of himself a few meters in front of Barcelona defender Jordi Alba.

The league said the fan, who was not wearing a mask or gloves when he entered the field early in the second half, disobeyed orders from security personnel and broke health safety laws in place because of the coronavirus pandemic.

The league condemned the fan’s actions and said they “constituted a crime.” It said such actions “jeopardize everyone’s health and the integrity of the competition.”

The fan told Spanish media his goal was to take a photo with Argentina star Lionel Messi, but he didn’t have time to do it before security officers arrived to take him off the field.

He said he entered the San Moix Stadium by jumping over a fence and then came down from the stands to the field.

The youngster said he was released by police after they noted his details and had him sign a document. He said they made him delete the photo taken with Alba.

The Mundo Deportivo sports daily said the fan is of French origin but has lived in Mallorca his whole life.

Barcelona coach Quique Setien said his side's 4-0 win over Mallorca after the three-month hiatus was the ideal launchpad for a title bid after it provisionally opened up a five-point lead over Real Madrid. 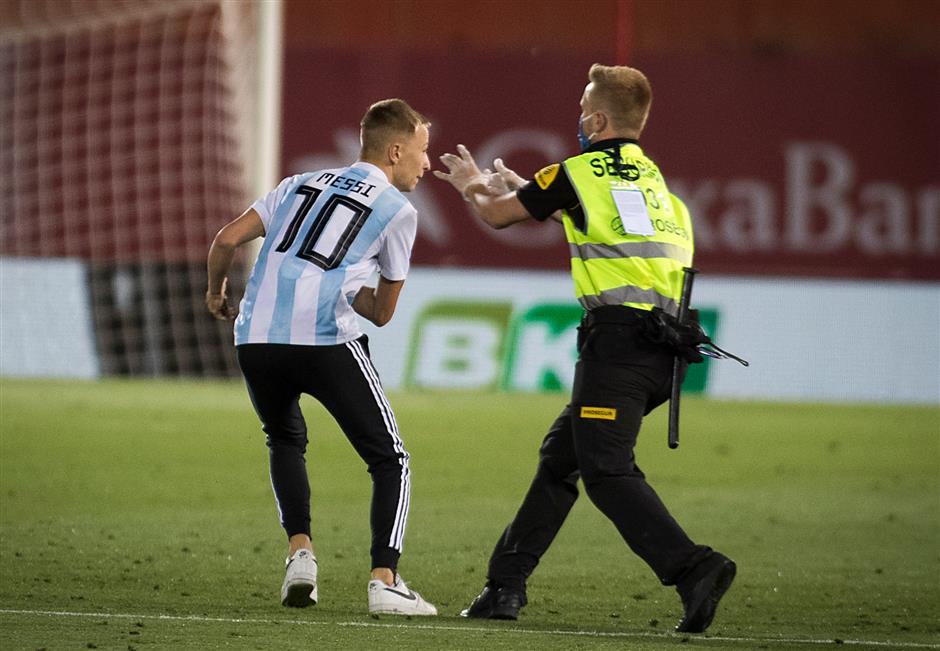 A security guard tries to catch a pitch invader during the Spanish La Liga match between RCD Mallorca and Barcelona at the San Moix Stadium in Palma de Mallorca on Saturday. Barcelona won 4-0.

The champion got off to a perfect start in its first match since the season was halted by the COVID-19 pandemic and there was good news all round as Arturo Vidal headed the Catalans in front after 65 seconds and Martin Braithwaite scored his first goal for the club.

Jordi Alba and Messi struck in the second half, Luis Suarez looked lively on his return after six months out with a knee injury and 21-year-old central defender Ronald Araujo made an encouraging full debut.

"The sensations are very positive considering we had spent so long without playing. Starting like this is an enormous boost for the future," Setien told a virtual news conference.

The coach started with a front three of Messi, Antoine Griezmann and Braithwaite, praising the contribution of the Danish forward, who joined in February after the club was given permission to sign outside the transfer window due to injuries.

"Braithwaite was excellent, he has adapted very well to our play out on the left wing and was always doing the right thing," Setien said.

"He scored and worked very hard and you have to congratulate him because it's not easy to arrive in a team like this and play so well."

On Suarez, the coach added: "It was an extraordinary return, all his interventions were of the highest level and it's the Luis we all want to see, he'll get even sharper and is going to be crucial for us."

There was also a strong display in defense from Uruguayan Araujo, who made his second appearance and first start since being promoted from the B team.

"He was playing in a different role to what he does for the B team but he was solid in every aspect," Setien said.

"He has a very cool head and he did very well. He played superbly and he can be very proud."

Barcelona's next match is at home to struggling Leganes on Tuesday.