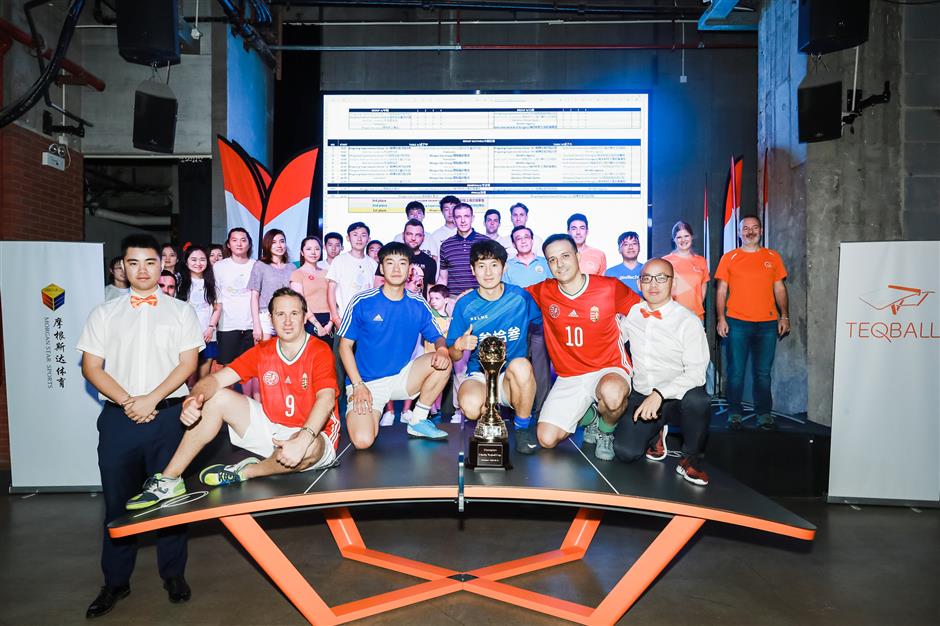 Players participating in the Charity Teqball Cup pose for photos.

The Consulate General of Hungary organized the Charity Teqball Cup sport event in the excellent atmosphere Cages Sports Bar on June 13, where 10 different teams were registered. The family amateur sporting event was very unique, as the tables were placed inside a sports bar where the two-member teqball teams were competing under the coordination of professional teqball referees.

Teqball is a football-based sport, played on a specially curved table (the Teq table), which is attracting a new generation of athletes and amateur enthusiasts (teqers), whose ambition is to develop their technical skills, concentration and stamina. The sport, which was created in Hungary in 2012 is a truly gender-equitable game, as the rules define that teqball shall be played between two (singles) or four players (doubles), irrespective of gender. The sport follows a points-based scoring format and can be played on various surfaces such as sand, acrylic or indoors. Teqball allows players a maximum of three touches before returning the ball to the opponent, so if you can juggle a football three times, you will excel at teqball as well. Teqball is the purest use of a football, with the rule of no physical contact allowed between the players, or between the players and the table, helping eliminate the risk of impact injuries.

Through this friendship teqball competition, the charity money collected was donated to Guan Tianpei Primary School in Huai'an City Jiangsu Province, where is also the hometown of Premier Zhou Enlai, to buy books and bookshelves for the library of the new campus. Seventy percent of the students in the school are rural or urban migrant children, more than 50 percent are left behind children, and there are 12 orphaned and disabled children. Sports build us into a strong body, while books are the ladder of human progress and food for the spirit. We sincerely hope that through this small act of kindness, the source of knowledge can be passed on from generation to generation.

The teqball competition was opened by Mr Szilárd Bolla, the Consul General of Hungary in Shanghai then Yao Chenmin and Simbazz (Zhu Yaoqian) Chinese freestylers made a great show. Simbazz participated on the competition as well with his team mate, the actor, Tom Price. The Charity Teqball Cup was win by the team of Morgan Star Group and Mingxiang Experimental School finished on the second place. The success of the Mingxiang is symbolize the fruitful sport diplomacy between Hungary and China as far as last year November the Ministry of Foreign Affairs & Trade donated a Teqball table to the Mingxiang Experimental School. The team of the Consulate General of Hungary finished on the 3rd place, Mr Előd Tasnády commercial consul of the Consulate General of Hungary and Mr Daniel Kovács key account manager of the Back & Rosta Hungarian company were the member of the teams. The Charity Teqball Cup was sponsored by the Hungarian BiotechUSA company and Morgan Star Group.