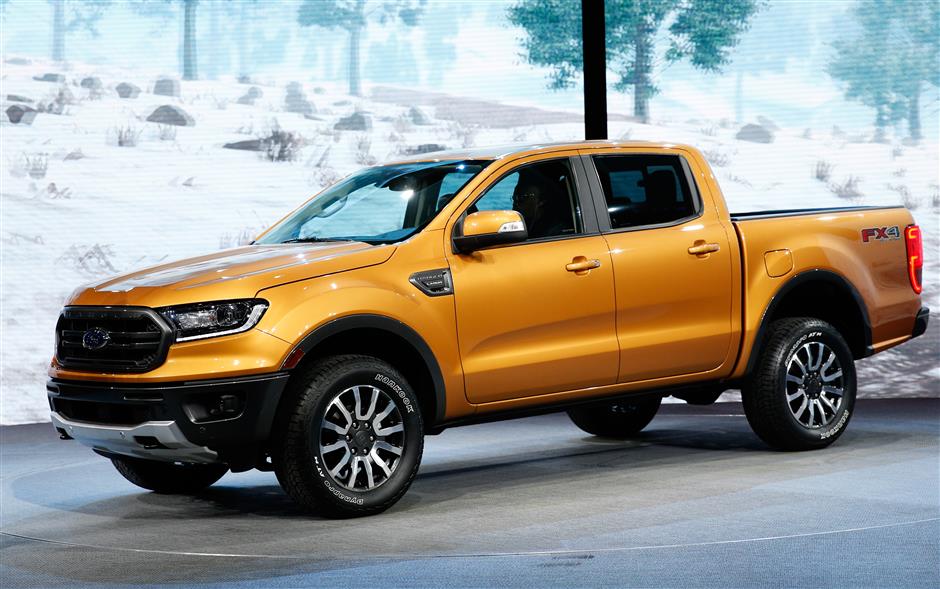 The 2019 Ford Ranger is unveiled during the press preview at the North American International Auto Show in Detroit, Michigan, US, January 14, 2018.

Ford Motor Co will significantly increase its planned investments in electric vehicles to US$11 billion by 2022 and have 40 hybrid and fully electric vehicles in its model lineup, Chairman Bill Ford said on Sunday at the Detroit auto show.

The investment figure is sharply higher than a previously announced target of US$4.5 billion by 2020, Ford executives said, and includes the costs of developing dedicated electric vehicle architectures. Ford's engineering, research and development expenses for 2016, the last full year available, were US$7.3 billion, up from US$6.7 billion in 2015.

Ford Chief Executive Jim Hackett told investors in October the automaker would slash US$14 billion in costs over the next five years and shift capital investment away from sedans and internal combustion engines to develop more trucks and electric and hybrid cars.

Of the 40 electrified vehicles Ford plans for its global lineup by 2022, 16 will be fully electric and the rest will be plug-in hybrids, executives said.

"We're all in on this and we're taking our mainstream vehicles, our most iconic vehicles, and we're electrifying them," Ford told reporters. "If we want to be successful with electrification, we have to do it with vehicles that are already popular."

General Motors Co, Toyota Motor Corp and Volkswagen AG have already outlined aggressive plans to expand their electric vehicle offerings and target consumers who want luxury, performance and an SUV body style - or all three attributes in the same vehicle.

Mainstream auto makers are reacting in part to pressure from regulators in China, Europe and California to slash carbon emissions from fossil fuels. They also are under pressure from Tesla Inc's success in creating electric sedans and SUVs that inspire would-be owners to line up outside showrooms and flood the company with orders.

GM said last year it would add 20 new battery electric and fuel cell vehicles to its global lineup by 2023, financed by robust profits from traditional internal combustion engine vehicles in the United States and China.

Volkswagen said in November it would spend US$40 billion on electric cars, autonomous driving and new mobility services by the end of 2022 – significantly more than when it announced two months earlier it would invest more than 20 billion euros on electric and self-driving cars through 2030.

Toyota is racing to commercialize a breakthrough battery technology during the first half of the 2020s with the potential to cut the cost of making electric cars.

Ford's additional investments in electric vehicles contrasted with many of the vehicle launches at the Detroit show which featured trucks and SUVs. On Sunday evening, Daimler AG unveiled its new G-class SUV, a bulky off roader, in an abandoned movie theater in downtown Detroit once used as a set for the movie “8 Mile.”

Daimler CEO Dieter Zetsche hinted to Former California Gov. Arnold Schwarzenegger during an exchange on stage next to the G-class that Daimler would someday have an electric version of the vehicle.

SUVs figured in Ford's electric vehicle presentation. The automaker's president of global markets, Jim Farley, said on Sunday that Ford would bring a high-performance electric utility vehicle to market by 2020. The company will begin production of a hybrid version of its popular F-150 truck at a plant in Dearborn, Michigan, in 2020.

"What we learned from this first cycle of electrification is people want really nice products," Farley said.

Ford’s shift to the electric vehicle strategy has been more than six months in the making after Hackett replaced former Chief Executive Mark Fields in May.

The plan was finalized in recent months after an extensive review, a person familiar with the process said. In October, Ford disclosed it had formed a team to accelerate global development of electric vehicles, whose mission is to “think big” and “make quicker decisions.”

Some of the electric vehicles will be produced with Ford’s JV in China aimed at the Chinese market. One aim of Ford’s “Team Edison” is to identify and develop electric-vehicle partnerships with other companies, including suppliers, in some markets, according to Sherif Marakby, vice president of autonomous vehicles and electrification.

China, India, France and the United Kingdom all have announced plans to phase out vehicles powered by combustion engines and fossil fuels between 2030 and 2040.