Car-sharing steers a trend in tune with the young

According to a recent J.D. Power survey of 3,471 Chinese consumers, 54 percent of respondents said they are aware of car-sharing and 81 percent said they have used or willing to try it.

Car-sharing is all the buzz among young Chinese. The trend is being driven by demand in the nation’s larger cities, where sharing is viewed as a cheaper, more flexible way of getting around than buying a vehicle.

My friend Li Xing, 25, who works for a media company, is among the frequent users of car-sharing.

“It’s a good choice for young people who just start their careers,” he said. “I use car-sharing to go to work, to go shopping and to go on weekend outings. I might consider buying a car in the future, when I can afford it, but for now, everything goes well with shared cars.”

Li is certainly not alone. According to a recent J.D. Power survey of 3,471 Chinese consumers, more than half said they are aware of car-sharing and 81 percent said they are willing to try it.

The concept of sharing cars sits well a generation that is more connected and open to new trends. Li said that he has joined a WeChat group made up entirely of car-sharing users. Most in the group are between 23 and 28 years of age, he said.

A user is selecting available shared cars on the smartphone.

Car-sharing essentially works like bike-sharing programs. A user downloads a car-sharing app on a smartphone and completes registration by uploading his or her driving license. After selecting an available car in the desired vicinity and booking it online, the user can unlock the car via smartphone. Trip completed, the user returns the car to a designated destination or to any parking lot in the city. Payment is made online.

Car-sharing is giving it a new dimension to the world’s largest auto market. Boston Consulting Group forecasts that around 600,000 vehicles in China will generate about 80 billion yuan (US$12.6 billion) in revenue by 2021 through car-sharing and car rentals.

The group noted that the appeal of private car ownership is somewhat waning among Chinese young people in large, congested cities, where overnight parking can be a nightmare and securing a license plate tricky and expensive. 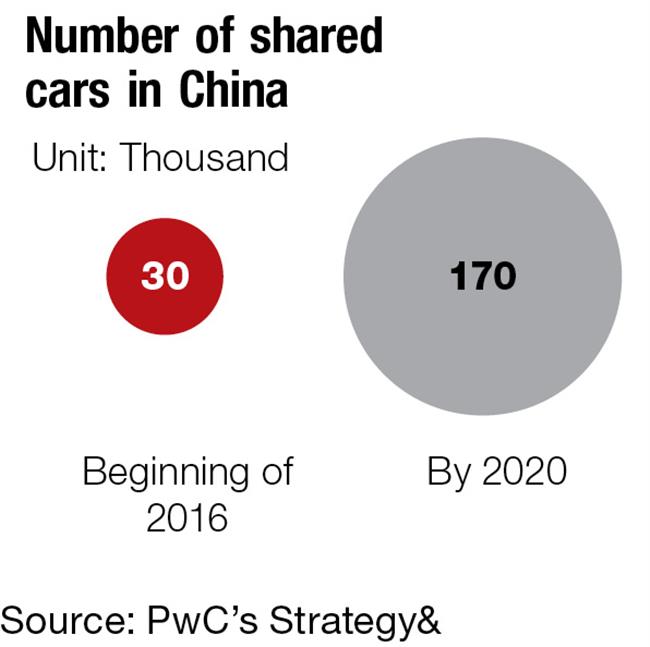 There are already more than 300 car-sharing operators in China. The sector will grow at a rate of more than 50 percent a year in the five years, according to estimates from PwC’s Strategy&. The number of shared cars in China, which totaled about 30,000 at the beginning of 2016, is expected to reach 170,000 units by 2020, the consulting firm said.

Among the largest car-sharing operators in China are EVCARD, owned by Shanghai-based SAIC Motor; Gofun Chuxing, founded by the Beijing Shouqi Group; and Daimler’s car2go and Car2Share. The rest of the field is filled with mostly smaller companies.

“We are targeting users who have a budget of 100,000 yuan or less when it comes to buying a vehicle,” said Cao Guangyu, general manager of Global Car Sharing & Rental Co, which operates EVCARD. “Young people have drivers’ licenses and want to drive, but purchasing a car remains a challenge for them as they just start their careers.”

“The market has potential for further development, and competition will get fiercer,” said Zhang Xiaofeng, an independent market observer. “We see some companies like Didi and Mobike announcing plans to enter the car-sharing sector. These companies have advantages in terms of big data and customer management. The newer players are also attracted by the attention of young consumers on social platforms such as Weibo.”

Industry insiders said young people using car-sharing services in China are influenced by price and user experience — two factors that car-sharing operators need to heed if they want to succeed.

The operators are not short of marketing strategies aimed at the young.

EVCARD and Gofun try to attract young consumers by providing coupons through social networking platforms such as WeChat and Weibo. Coupons and other discounts are aimed at the budget realities of the young generation.

“With coupons, car-sharing is much cheaper than taking a taxi,” said Zhang Xiaojie, who works for the East China Science and Technology Journal. “Whereas a trip in a taxi would cost me 40 yuan, the coupons attached to a shared car reduce the cost to 15 yuan. We young people are price conscious, which is the biggest reason why I use car-sharing.” 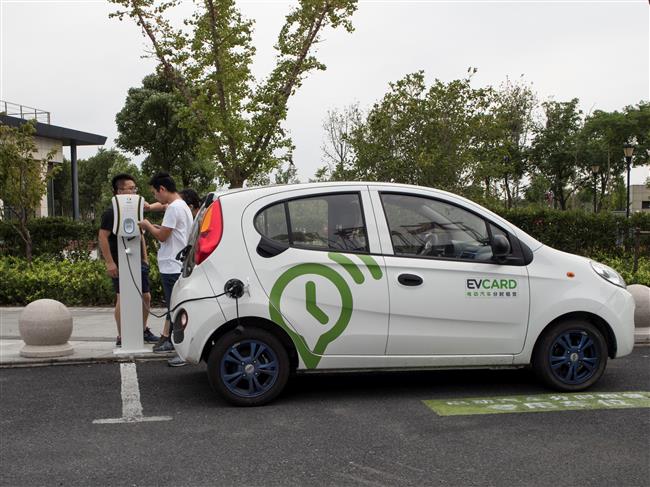 EVCARD, one of the country's biggest car-sharing companies, is attuned to the lifestyle of young consumers who like weekend trips out of town. Some of its shared cars are in popular visitor sites near Shanghai.

EVCARD is also keenly aware that many young consumers like traveling with friends or family on short day or weekend trips out of town. Some of its shared cars are placed in popular visitor sites near Shanghai, such as the Yellow Mountain Scenic Area.

Industry analysts said young consumers can be finicky when it comes to user experience.

“Young people are very picky,” said independent analyst Zhang Xiaofeng. “If a car-sharing service is inconvenient or has any problems with mobile app software, registration or operating ease, they will go to other options.”