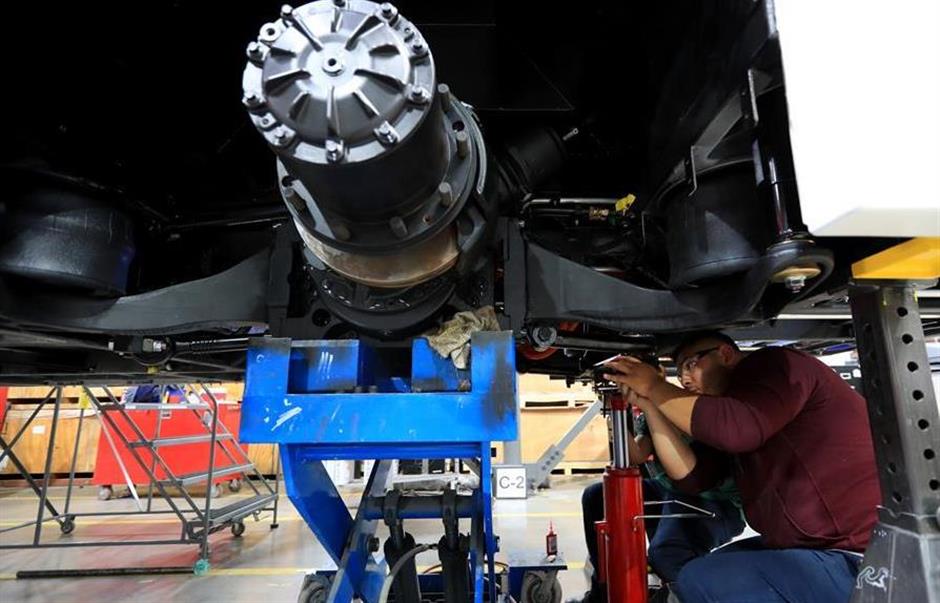 Workers are seen at an electric bus factory of China's BYD in Lancaster, the United States, May 1, 2018. BYD, one of the largest electric bus manufacturers in the US, set up the Lancaster factory in May 2013, employing some 800 local people. 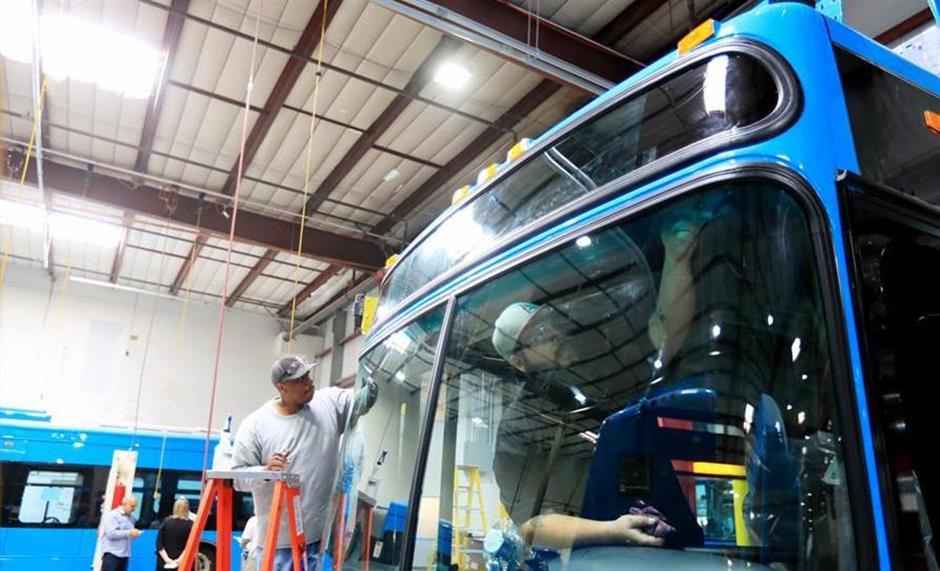 "I started out on the line just a year ago as an hourly worker, same as everybody else," recalls Kris Esposito, the newly-minted Production Manager of the Bus Chassis Section of China's new BYD electric bus factory in Lancaster.

"But BYD rewards you for hard work and taking initiative. The opportunities for advancement here are excellent," he told Xinhua in an interview this week.

Esposito, a young 30-something father of two had heard that a Chinese electric vehicle company, BYD, was opening a factory in California to manufacture electric buses and was hiring hundreds of people in the Lancaster area.

In an exclusive interview with Xinhua on Thursday, Lancaster's Mayor R. Rex Parris, revealed, "We were facing the highest unemployment rate since the Great Depression. But since BYD chose to build their plant in Lancaster, we have 100 percent employment. That was a lifesaver to our community."

After Esposito applied and landed a base-level assembly-line position at BYD, he left his job as a security consultant who travelled the globe on assignment, to move to the high desert in Antelope Valley with his homemaker wife to set down roots for his growing family.

"I'll feel blessed. My wife doesn't have to work, and gets to stay at home to take care of our 3-year old son and 9-month old daughter instead of having to put them in daycare," Esposito told Xinhua.

Esposito's military background is evident by his proud posture and the attitude of respect with which he treats his co-workers. The focused discipline that the Chinese automotive manufacturer offers appeals to Esposito's military training, as do the prospects for career advancement for him and his team.

After watching a high-energy team-building chant of "Loyalty! " that rang out through the whole factory, Esposito explained how he motivates the 4 supervisors and 92 employees who work under him to excel at their jobs.

"I treat them like family. There is so much potential for all these guys. They can look at me and say, he moved up to management in under a year - I can do that too."

This appreciation was echoed by Peter Balin, a Test-Line Specialist Lead, who used to work with his father in a small, family-run tire business. With other jobs scarce, he came to BYD looking for a fresh start when his father retired and closed the company.

"I started here as a bus driver just looking for a place I could grow into. Now, I've been promoted to work as a Specialist Lead, working directly under the Testing Supervisor, and my son works for the company too," he added proudly.

When asked if his daughter might also join the BYD family, he flashed a "Happy Dad" grin, "You never know."

But combining US and Chinese management and working styles to create a smoothly-run business is not without its challenges.

"The cultures are pretty different, so there was a real period of adjustment in the beginning on how to mesh those different systems together," David Ramirez, head of the "Sparks and Arcs" welding section, told Xinhua, overseer of 4 supervisors and 97 employees.

"But we worked through that. The salary and benefits here are comparable to US companies, our relations with the unions are good, and real promotion opportunities are there," he added. 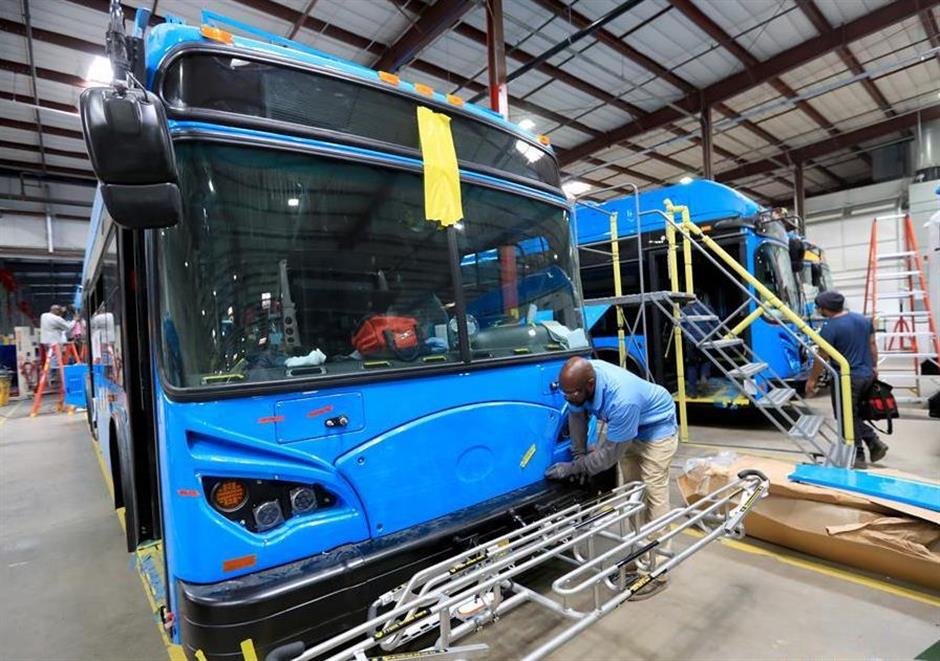 Workers are seen at an electric bus factory of China's BYD in Lancaster, the United States, May 1, 2018. 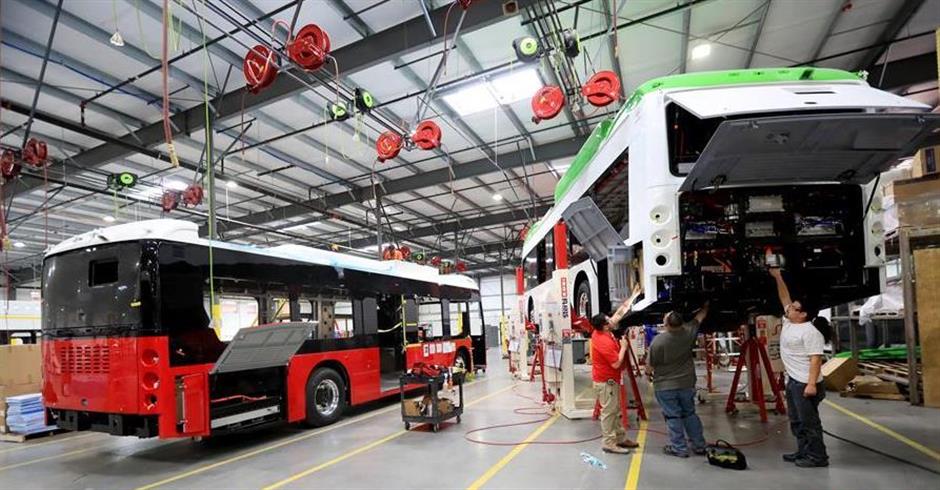 BYD is also leading the way in diversity. They're beefing up hires of women on the line and the supervisors and line-workers Xinhua reporters met on site read like a US Immigration Swearing-In Ceremony for new citizens: African-America, German, Puerto Rican, Canadian, Armenian, Mexican, Arabic, Haitian, and lots of plain vanilla, multi-generational Americans too.

The list goes on, fueled by BYD's commitment to open their doors to people of any ethnicity who are willing to work hard and learn what it takes to help the company lead the electric vehicle industry in technical innovation.

That innovation has its challenges. Ramirez, who has been in the automotive industry for over 17 years, confessed, "It's crazy how fast this company moves. For example, we build 22 buses, but by the time we get to bus #22, there are new things in there that make bus #1 look antiquated!"

In response to the increasingly serious environmental impact of global climate change, US states like California and countries like China are proactively mandating the adoption of electric vehicles in municipal bus fleets and the consumer market too.

California has mandated 4 million electric cars and municipal bus fleets on the road by 2030, while China has mandated that 7 times their current number of electric cars by 2025 and is actively contemplating a complete ban on fossil fuel vehicles in the not too distant future.

This is creating an economic boom for electric vehicles that BYD has been quick to exploit. Founded in 1995 as a rechargeable battery maker and started to make cars in 2003, BYD expanded into electric car manufacturing around 2006 and launched the world's first plug-in hybrid vehicle in 2008. BYD raced up the ranks to become the sales champion in the global EV market for three years in a row, from 2015 to 2017.

Samsung and Daimler (Mercedes Benz) also opted to invest heavily, betting on BYD Automotive's ability to lead the pack in the global electric vehicle market, as it already does in China.

Recognizing that locating a Chinese company in the US and providing well-compensated employment for a growing number of US workers would be a win-win business model for both the US and China, BYD opted to set up shop in Lancaster, a small desert city an hour north of Los Angeles, bringing jobs and prosperity with them.

"The more Chinese companies build plants in the US, the more things get better," Mayor Parris forecast. "But they face obstacles to doing business here that local officials have to help them navigate. We were able to be a full partner to BYD and help them through the maze of US laws and regulations."

BYD now is one of the largest electric bus manufacturers in the United States.

With big deals already underway in Los Angeles, Las Vegas, and Denver, that goal maybe closer than anticipated. After expanding their bus division in under a year from 300 to 800 employees, BYD has yet to apply the brakes.

As other automotive companies gear up to compete with BYD for the next generation of electrical vehicles, the race is on.

"We are always evolving. There is always something new to learn," said Esposito. "It keeps us all on our toes."