China to lead the world in vehicle electrification: Valeo

French auto parts maker Valeo said that around 4 million vehicles will be equipped with 48-volt systems in China by 2023, accounting for 13 percent of total vehicle production.

The company is optimistic on the 48-volt systems, which is a mild hybrid technology that combines a conventional internal combustion engine with a 48-volt electric motor. The system allows a car’s electrical system to engage more with the functioning of the vehicle, thus promising higher fuel-saving capabilities.

Other international auto suppliers like Bosch, Continental, Delphi, and Johnson Controls are developing the technology, with some companies already starting mass production in the Chinese market.

The company said it is optimistic about the future prospects of mild hybrid technology because of China’s dual credit policy and tougher emission control requirements. For automakers, they are required to reduce emissions by applying hybrid technology such as 48-volt systems into their cars.

China’s government is actively promoting the development of new-energy vehicles in order to reduce emissions and clean up the skies in major cities.

China issued a regulation in September last year requiring automakers to produce a minimum number of non-polluting vehicles. Known as the dual credit policy, it requires carmakers to generate new-energy credits equivalent to 10 percent of sales in 2019, rising to 12 percent in 2020.

The regulation, which took effect in April this year, also includes targets for fuel economy and a credit-trading system aimed at saving energy and promoting green cars.

In early 2017, Valeo became the first global auto parts maker to build 48-volt systems in China. The company said it has offered the systems to more than 20 automakers globally. In China, Valeo has received 12 orders from carmakers for its 48-volt systems.

“Chinese carmakers show great interest in 48-volt systems and we hope to mass produce these systems in China in the coming future. Our 48-volt systems have been applied in car models under Chinese auto brands such as Changan and Geely already,” said Michael Forissier, head of global R&D and product marketing director for Valeo Powertrain Systems. 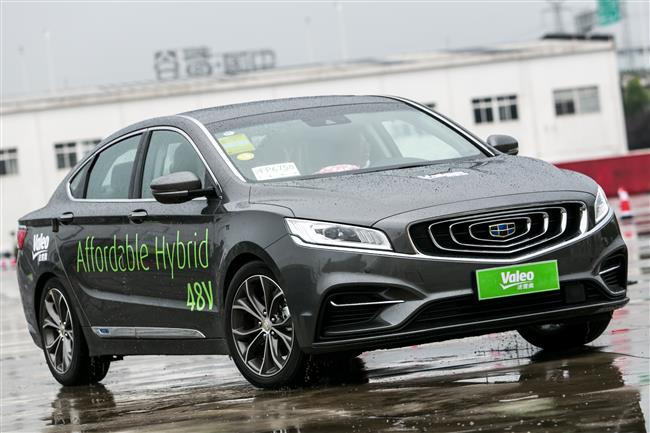 Valeo's 48-volt systems have been applied in car models under Chinese automaker Geely.