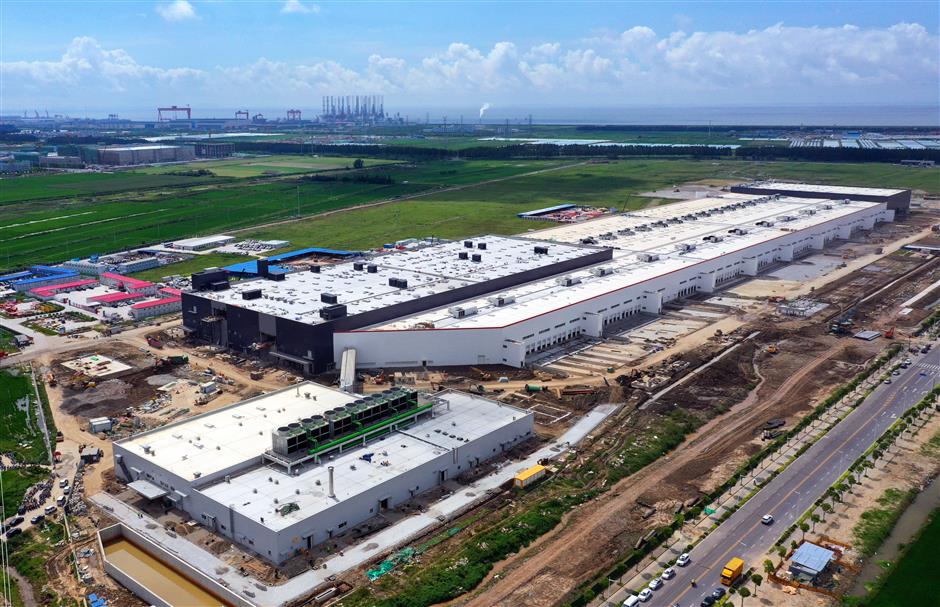 The Tesla gigafactory in Lingang.

As Elon Musk, CEO of US electric carmaker Tesla Inc visits Shanghai this week, he will see first-hand how fast his gigafactory has been built.

In just over seven months since his previous visit, a gigantic plant covering 864,885 square meters has already taken shape on a piece of empty land in Lingang Area, a high-end manufacturing park in the southeast harbor of Shanghai.

"The factory is speeding up its construction at an unprecedented rate," said Tesla's vice president Grace Tao. "The production equipment has already entered the plant, and installation and testing are going smoothly."

In January, Tesla broke ground on its Shanghai factory, becoming the first to benefit from a new policy allowing foreign carmakers to set up wholly owned subsidiaries in China.

The plant is expected to start production at the end of this year, with an initial weekly production of about 3,000 Model 3 electric vehicles, a smaller and more affordable model sold at a starting price of 328,000 yuan (US$46,300).

At the Shanghai plant, "our dreams are becoming reality at the fastest pace in the world," said Tao.

"It's a gigantic project like I've never seen before," said a project supervisor at the site. "It's really an exciting scene for the auto industry."

The Tesla gigafactory is Shanghai's largest foreign manufacturing project to date. It is expected to have an annual production capacity of 500,000 electric vehicles on completion.

"However, speed is not the only criterion for the construction of the plant," said Tao. "We are also focusing on making the most advanced and safest products in the world."

According to Tesla, the production line for the Model 3 in Shanghai will be more streamlined and cost-effective, with the cost per unit capacity expected to be 50 percent lower than that in the United States.

After Tesla in late May started pre-orders for the Model 3 that would be manufactured in Shanghai, a large number of customers visited the company's Demo Room in central Shanghai to check out the new model.

A product specialist surnamed Hu was impressed by the purchasing power of Chinese consumers as well as their growing awareness of environmental protection.

"I believe that the products of the Tesla factory in Shanghai will achieve good sales performance in the future," Hu said.

Despite slower growth, China remained the world's largest auto market, with 28.08 million autos sold in the country last year, according to the China Association of Automobile Manufacturers.