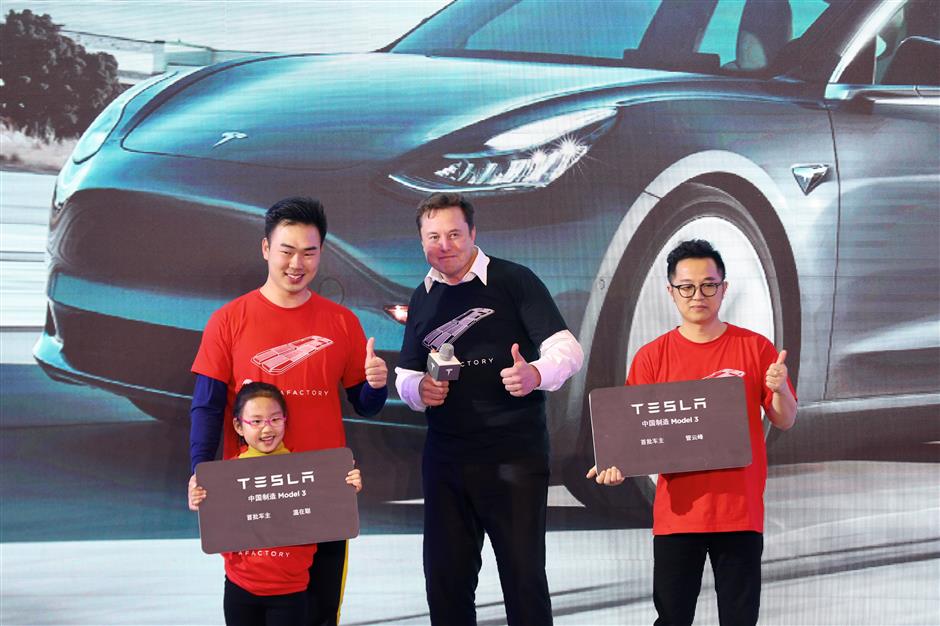 Tesla CEO Elon Musk presented the first batch of made-in-China cars to buyers in a milestone for the company’s new Shanghai gigafactory yesterday.

The entrepreneur danced and gave out high-fives on a stage as sleek Model 3 sedans — the company’s mid-price, mass-market offer — were driven up one by one and presented to buyers who jumped into the back seats before being driven away at the plant.

The US$2 billion Tesla Inc factory started delivering cars in just 357 days, a record for global automakers in China.

During the Model 3 delivery event held at Tesla’s Gigafactory 3 in Shanghai, Tesla said that its Shanghai team will start work on Model Y prototypes in 2020, while also tooling the Shanghai plant for the mid-sized electric sport-utility vehicle’s production.

He predicted that “ultimately Tesla Model Y will have more demand than probably all the other cars of Tesla combined,” with his voice cracking with emotion at times while talking about the progress of the Shanghai factory.

Musk expressed appreciation for the support his company received from all levels of the Chinese government.

“The most amazing thing really is the incredible progress that has been made by the Tesla Shanghai team,” Musk said.

“Without the support of the Chinese government, especially without the help of the Shanghai government of all levels, we would not be able to make this progress.”

Tesla CEO Elon Musk dances on stage at the made-in-China cars event in Shanghai yesterday. Musk stripped off his jacket and flung it aside to reveal a T-shirt with a cartoon of the factory. In a tweet, he labelled the video “NSFW” — not safe for work.&n

Tesla signed an agreement with the Shanghai municipal government in July 2018 to build the factory. In October 2018, the company was granted approval to use an 864,885-square-meter tract of land in Lingang for its Shanghai plant.

As the largest foreign-invested manufacturing project in Shanghai, construction of the gigafactory began on January 7, 2019 when the area was still a wasteland. In 10 months, it had already entered trial production and on December 30, the first 15 Model 3 cars were handed over to company employees less than a year after it began operation.

“The sedans’ components will be completely domestically produced by the end of 2020,” according to Song Gang, the plant’s manufacturing director. Currently, 30 percent of the components are produced locally.

The ceremony was attended by Shanghai Mayor Ying Yong and other senior government officials.

Wu Qing, vice mayor of Shanghai, said that the Tesla gigafactory showcases the fruitful results of cooperation between Shanghai and Tesla, as well as Shanghai’s good business environment.

The factory is the company’s first outside the United States and a key step forward in Musk’s strategy of going global.

Musk said it was just the start of what will be a growing investment in China by the California-based electric-vehicle pioneer.

Tesla has said the multi-billion-dollar plant is producing the Model 3 vehicles at a run-rate of 3,000 cars per week.

Musk has said that the plant would eventually have an annual production capacity of 500,000 vehicle.

Tesla has already started pre-orders for China-made Model Y vehicles on its official website. With a starting price of 444,000 yuan (US$63,844), the Model Y car model is expected to be produced from 2021, according to the company.

The Model Y will have five seat and seven seat editions.

Tesla released its electric sport-utility vehicle Model Y in March last year in US with a starting price of US$39,000 for the standard range version.

The Model 3 and Model Y share around 75 percent of the same parts. This means the two car models should be relatively easy to manufacture side-by-side at Gigafactory 3 in Shanghai.

Green cars have seen rapid growth in China in the past decade, with sales rising from fewer than 10,000 in 2009 to more than 1.26 million in 2018. But the industry is also seeing challenges as the government slashes subsidies and foreign brands like Tesla make inroads into China with their factories.

Yang Yang, who works in Shanghai, has considered changing his car recently. After comparing many petrol-powered vehicles and new energy vehicles, he opted for a domestically made Tesla Model 3. “The price is acceptable and the car has a relatively long driving range, which meets all my needs,” Yang said.

Tesla delivered its first China-made Model 3 vehicles to general customers at its Shanghai plant on Tuesday.

Prior to the made-in-China Model 3 cars, the price of an imported Tesla Model 3 vehicle stood above 439,900 yuan (US$63,069) in the Chinese market. The price tag of the Shanghai-made sedans, however, starts at 299,050 yuan after subsidies.

As a benchmark for NEVs, the Model 3 will help drive the innovation and upgrading of domestic suppliers, according to a report by Minsheng Securities.

Besides Tesla, more luxury car brands have made plans to produce NEVs in 2020. The foreign-made NEV cars will compete on equal footing with Chinese automakers, as China is scheduled to eliminate government subsidies for NEVs this year.

“Though the NEV market is now dominated by local brands, with new forces joining in, China’s new energy automobile market will enter an era of fierce competition after 2020,” said Mou Jiawen, consulting director of Deloitte Auto.

As the first project after China lifted restrictions on foreign investment in the auto industry, Tesla’s Shanghai gigafactory shows that China, with continued efforts in reform and opening-up, still tops the list of investment destinations for foreign firms.

The country has in recent years significantly eased market access for foreign capital, vowing to further open up the market with new laws and regulations to support their investment.

Data from the Ministry of Commerce showed that foreign direct investment expanded 6 percent year on year to 845.9 billion yuan on the Chinese mainland in the first 11 months of 2019, and China attracted 722 foreign-funded projects, with each worth more than US$100 million, during the same period, an increase of 15.5 percent from a year ago. 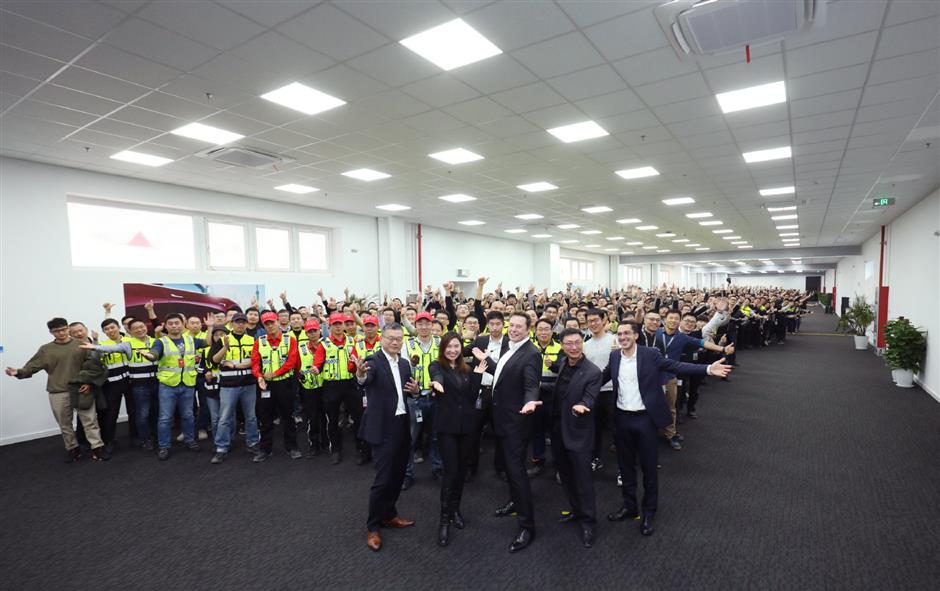 Tesla's China team is photographed at its Gigafactory 3 plant in Shanghai on Tuesday.