US carmaker Tesla announced Monday that it will export made-in-China Model 3 to Europe for the first time on Tuesday.

The first batch of 7,000 sedans is expected to arrive at the port of Zeebrugge in Belgium by sea at the end of November, before being sold in European countries including Germany, France, Italy, Spain, Portugal and Switzerland.

Tom Zhu, Vice President of Tesla Global and President of Tesla Greater China, said with the exports kicking off, Tesla China will spur domestic demand and expand the global market simultaneously in a bid to support the country establishing a "dual circulation" development pattern. 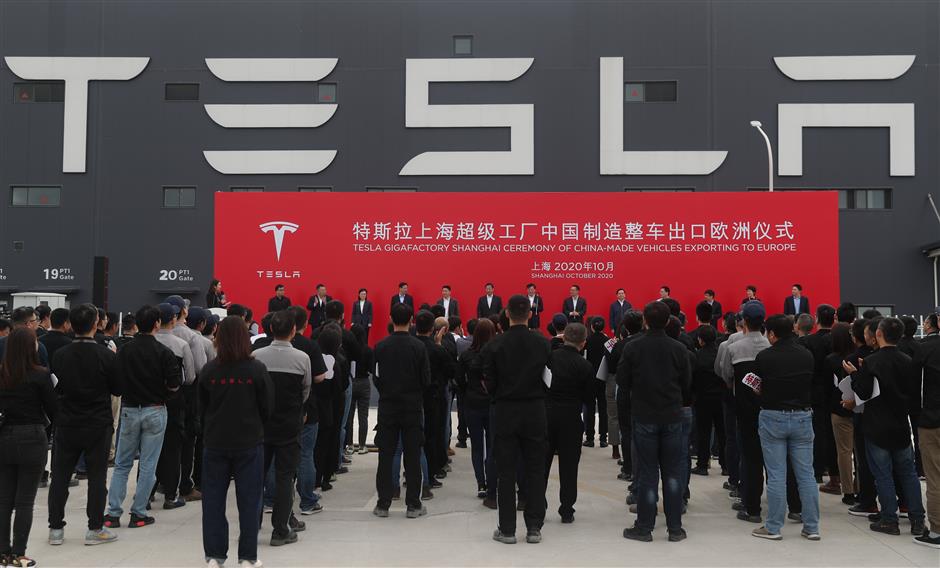 The export launch ceremony of Tesla's China-made Model 3 on Monday.

Chen Yin, executive vice mayor of Shanghai, said at the export launch ceremony that Tesla, with the Shanghai Gigafactory as its first overseas plant, is the first foreign carmaker to benefit from China's scrapping of stake ownership limits by foreign car manufacturers in the country.

The Shanghai plant had churned out more than 85,000 vehicles with an industrial output of over 21.6 billion yuan (about 3.2 billion U.S. dollars) by the end of September, with the weekly production stabilizing at 3,500 to 4,000 vehicles. Exports of vehicles and batteries by the plant are estimated to reach 450 million U.S. dollars within the year, Chen said in his speech.

Tesla delivered the first batch of made-in-China Model 3 sedans to the public earlier this year, one year after the company broke ground on its first overseas plant.