Net profit totaled 43.43 billion yuan (US$6.51 billion) in the first six months, the group said a statement today, adding that the profit growth would have been 38.8 percent year on year if a 9.5 billion yuan profit from Ping An's restructuring of a financing unit for the first half of 2016 was excluded.

Ping An more than doubled its interim dividend to 0.50 yuan per share.

Ping An's banking unit, which is undergoing transformation toward retail banking, reported net profit rose 2.1 percent year on year in the first half, slower than the annual increase of 3.4 percent in 2016.

The proportion of retail business income soared to 40 percent of the total revenue by the end of the first half from 29 percent in the same period last year.

The group's core financial business saw the number of individual clients rising 9.3 percent from the beginning of the year to 143 million, and profit contribution per capita adding 18.5 percent year on year to 241.66 yuan.

The group also runs Internet finance business via companies such as Lufax Holding, Ping An Good Doctor, and Finance One Account.

“In the near future, we hope to transform Ping An from a capital-driven enterprise into a technology-driven one,” said Peter Ma, chairman and CEO of Ping An.

Data with the China Insurance Regulatory Commission showed gross premium income at insurance companies in the country rose 23 percent year on year in the first half to 2.31 trillion yuan, slower than the 37-percent increase recorded in the first six months last year. 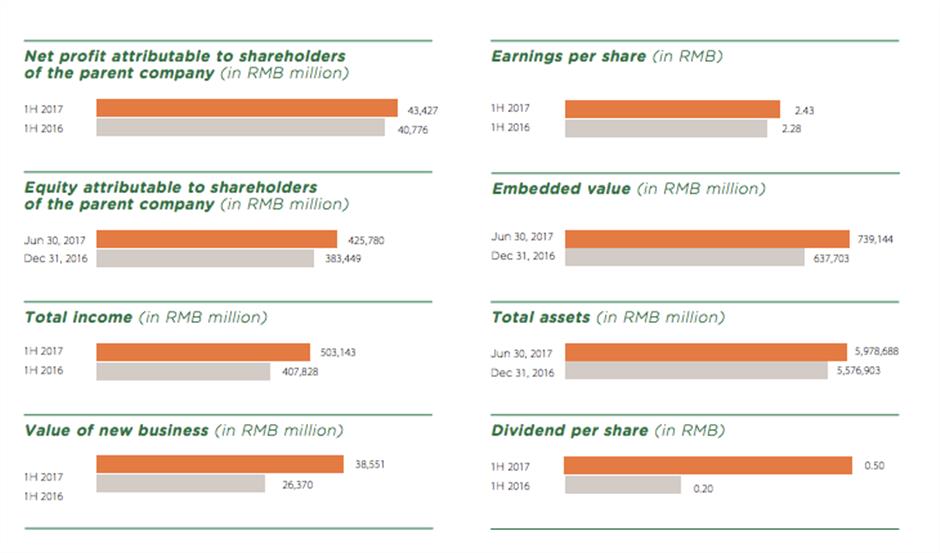