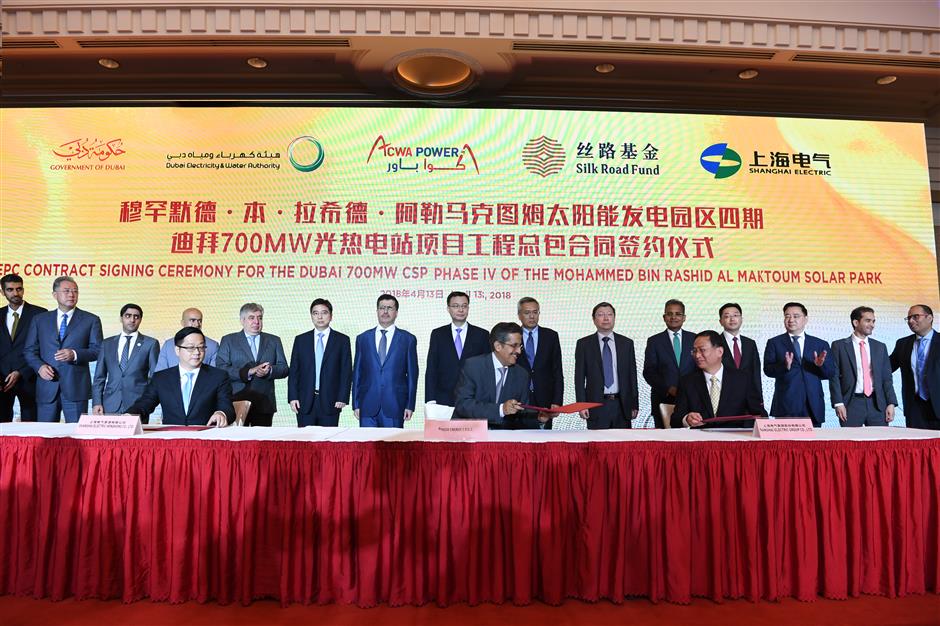 Chinese manufacturing giant Shanghai Electric signed a contract today to build the world’s largest concentrated solar power project in Dubai, in a move that will see it elbow into the global green energy market, the group said.

The contract was signed with Saudi Arabia-based developer ACWA Power, with Shanghai Electric being the contractor who will ensure the project is completed in time to support the World Expo in Dubai in 2020.

The US$3 billion project will see 700 Megawatts of generation capacity, which upon completion will account for 7 percent of Dubai's power supply, said Mohammad A Abunayyan, chairman of ACWA Power. The project serves Dubai’s plan to increase the share of clean energy in its total power output, which by 2020 should be 7 percent, and rise to 25 percent by 2030.

The solar power plant will feature a 260-meter tower to receive focused sunlight, which will be by far the world’s tallest tower of its kind, according to Dubai's government.

Shanghai Electric won the bid from tens of competitors “thanks to its reliability in delivery,” Abunayyan said. “More importantly, it enables the cost of power generation to be around 7 US cents per kilowatt-hour, almost the same as conventional energy.”

Zheng Jianhua, chairman of Shanghai Electric, said the project marks the group’s new step toward the world’s leading green energy markets, “with Dubai having the world's most severe manufacturing rules."

"We are confident that we are ready for such markets with our technologies improving rapidly," he said.

According to Zheng, the solar power plant applies concentrated solar power technology, allowing it to generate electricity all-day round rather than working merely when the sun shines.

The technology stores heat converted from sunlight for power, differentiating it from traditional technologies which convert sunlight directly into electricity.