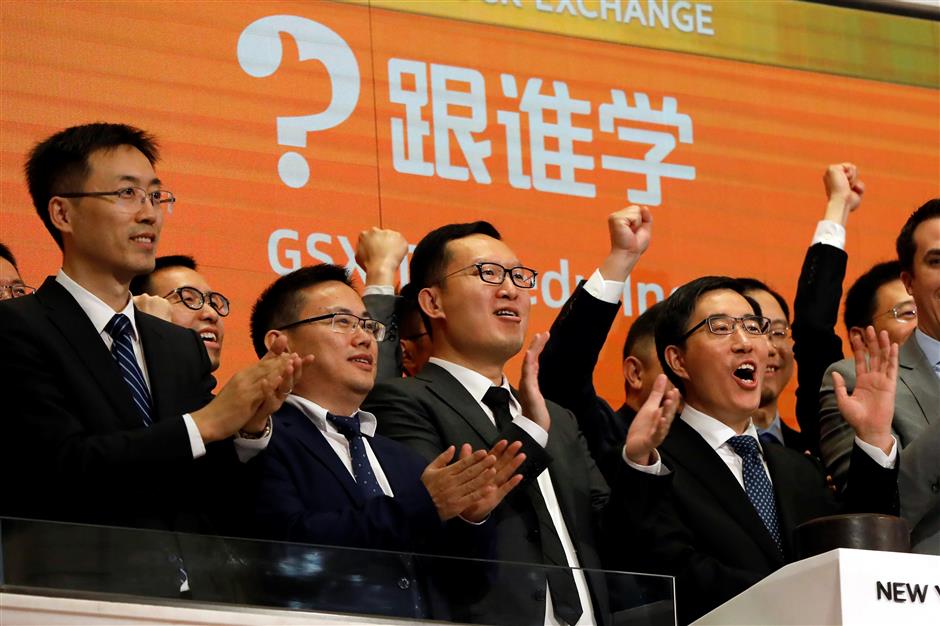 Listed on the New York Stock Exchange under the ticker symbol "GSX," shares of GSX Techedu fell a slight 0.18 percent, or 2 cents, to close at 10.48 dollars in its trading debut.

As of Thursday, the company was valued at nearly US$1.7 in terms of market capitalization.

The Beijing-based education firm priced its 19.8 million American Depositary Shares (ADSs) at 10.5 dollars per share, the midpoint of its target range of 9.5-11.5 dollars a piece.

Founded in 2014, the technology-driven company is China's third largest online K-12 large-class after-school tutoring service provider in terms of gross billings in 2018, according to its latest prospectus.

The company's services highlight online live broadcasting classes and a so-called "dual-teacher system," which comprises 169 instructors and 522 tutors as of March 31.

Its K-12 courses cover all primary and secondary grades, and contributed over 73 percent and 75 percent of the firm's total revenues in 2018 and for the three months ended March 31, respectively.

Its net revenue increased more than threefold to 59.2 million dollars in 2018 year over year.

Chen Xiangdong, chairman and founder of GSX, believed that consumer demand in China's after-school tutoring market would grow substantially, due to a large demographic base, the country's long-existing imbalance of education resources between urban and remote areas, and people's strong desire for admission to quality schools and universities.

"The number of primary and high school students is projected to reach over 24 million by 2023," Chen told Xinhua. "For every Chinese family, they need excellent teachers, no matter in first-tier or five-tier cities."

Chen noted that the company focuses more on assisting students in succeeding academically and offering rural students an equal access to high-quality education through internet technologies, especially those applied in its interactive live broadcasting and homework training systems.

He also mentioned that they had received "very warm welcomes" from both U.S. Securities and Exchange Commission and U.S. stock exchanges, as they "keep their door wide open, and hope excellent Chinese companies to go pubic in America."