The international beauty group with its long history over one century, L’Oréal, generated sales amounting to 26.94 billion euros in 2018 and employs 86000 people worldwide, with its unique international portfolio of 34 diverse and complementary brands.

The Chief Ethics Officer showed a picture during the interview—a car full of passengers is driving with high speed. Accident is in front of them with a life-threaten construction obstacle if hit; at the same time a group of passengers who will die if the driver changed the lane to avoid the obstacle.

“Decision has to be made immediately, and what will you do?” Mr. Lulin dropped the question.

The choice is definitely hard to make, but the most important thing exits in the discussion part instead of the answer.

“If you are running a motor company, the leaders’ thoughts decide if the brand can be reliable and chosen by customers.” he said.

A company’s behavior is as important as its economic performance or the quality of its products.

“In a world of exponential innovation, a company with a strong ethical culture is better equipped to face the challenges of tomorrow,” Mr. Lulin emphasized.

Joined L’oréal in 1999 as Group General Counsel for Human Resources, he created the Group Chief Ethics Officer mission at L’oréal In 2007. He described the journey of being the Chief Ethics Officer in L’Oréal for the 12 years as a “fantastic journey.” “the strong personal conviction and support of Jean-Paul Agon, Chairman and CEO of the group has been essential to the success of the journey of Ethics at L’Oréal.”

Mr. Lulin directs outreach efforts to stakeholders and to the general public internationally to

promote the development of business ethics; oversees L’oréal’s ethics strategy and programs and regularly visits all of the Group’ s operation worldwide (more than 65 countries since 2015). He is also in charge of Human Rights for the Group and presides the Group Human Rights Committee.

At the same time, he has given more than 100 Master Classes on business ethics and human rights at leading universities, business and public institutions on every continent and has been featured in the media in over 40 countries.

In 2015, Mr. Lulin was awarded the Carol R. Marshall Award for Innovation in Corporate Ethics from the Ethics & Compliance Initiative (ECI). He was also honored selected by the UN Global Compact as SDG Pioneer for advancing Business Ethics in 2018. It is the first time that this recognition is awarded to a Chief Ethics Officer.

Human rights, justice, ethics as the rules that the company will take to the employees and clients, suppliers, governments, and even the whole society and the public, “Ethics is a mission; it’s more than a job,” Mr. Lulin told Shanghai Daily.

Early in 2000, L’Oréal was one of the first companies in France to establish a Code of Ethics. L’Oréal was built on strong ethical principles that guide its development and contribute to building its reputation— Respect, Integrity, Courage and Transparency, with the ambition to be an exemplary company worldwide and integrate ethics into the very heart of its business practices.

These principles are namely the foundation of the Group’s policies in terms of compliance, responsible innovation, environmental stewardship, social and societal responsibility, and philanthropy.

“Things can be lawful but awful. We want to avoid the awful part of things.” Mr.Lulin said.

In this February, L’Oréal was recognized by the Ethisphere Institute as one of the “2019 World’s Most Ethical Companies,” and it has been the 10th year that the group achieves this recognition (with previous recognitions in 2007, 2010, 2012-2018), underscoring their commitment to leading with integrity and prioritizing ethical business practices, and which also “confirms that a company can be both ethical and successful,” according Jean-Paul Agon, Chairman and Chief Executive Officer of L’Oréal.

“Ethical questions are rarely simple but we address them with courage,” Lulin said. “The sincerity with which we approach ethical questions is key. Our culture of integrity allows us to develop relationships based on trust with our consumers, employees, shareholders, business partners and other stakeholders.”

On the latest annual Ethics Day of L’Oréal in October, employees from around the world chatted with the Group’s Chief Executive Officer, and Country Managing Directors in 70 countries via a worldwide live webchat. This tradition was launched in 2009. 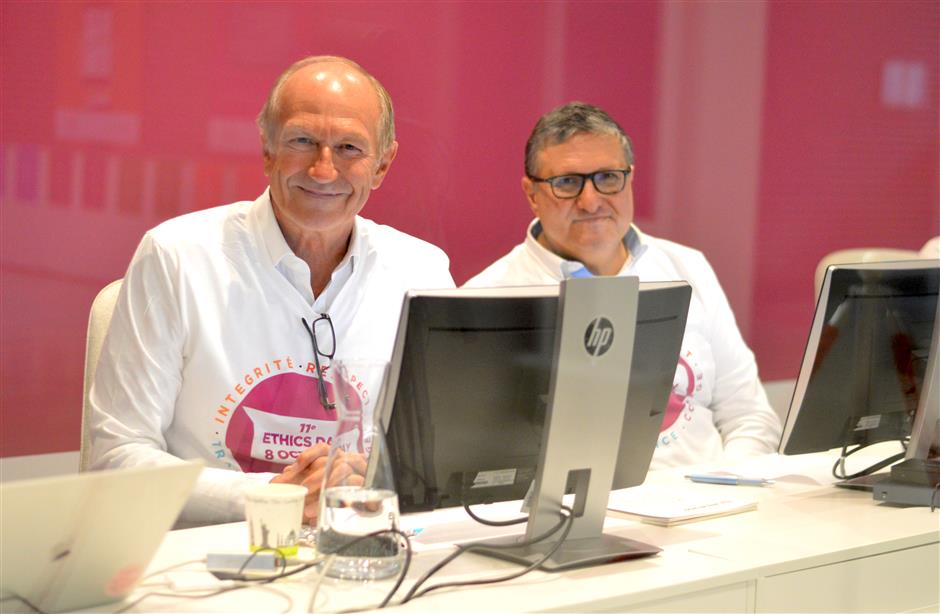 Three innovations were made in this year’s Ethics Day, including the totally transparent webchat process—the Group’s CEO sitting in an office with all glass windows in the atrium of L’Oréal’s worldwide headquarters and the process he answering the questions were broadcast online to the participants.

Among the numerous ethical questions asked by the global employees, Nearly 1000 were picked up not by the managing-level directors, but submitted and voted online by the employees themselves.

“With different themes every year, questions raised by the employees globally are changing every year, and reflect the progress of maturity” Lulin told Shanghai Daily.

The progress and growing-ups of the young generations of the Group can also be seen apparently from the questions they asked—This year for examplefewer questions about their payment, working time, and other personal-relevant issues; andthe same time more considerations on business ethics,such as the ethics to the industry and even the whole society are still taking higher and higher percentages.

The courage to open up the mind and speak out what they are thinking about is important, according to Mr. Lulin. and “it substantially helps us to make better business decisions.”

“Trust” and “Integrity” were mentioned many times by the Chief Officer during the interview; and the two words are among the most challenging goals to realized in reality but key to the ethics mission of the Group.

When the anonymous employee from L’Oréal’s Shanghai office described his experience participated in the Ethics Day, he admitted that the leading group’s sincerity and frankness gave him more confidence and encouragement to speak up.

Two “Rights” are also the key to figure out their own solution to the ethics issues according to Mr. Lulin —“Do I have the Right to do that?” and “Is that the Right thing to do?” The ethics mission is relevant to obeying the laws and the rule, but far more beyond, it’s the ability of trust and being trusted, the courage to respect and to be respected.

The big efforts that have been making for over one decade to achieve the harmony of both among the employees inside the Group and their business strategies toward outside bring L’Oréal’s and Lulin’s achievements in this area which have also been internationally recognized on numerous occasions.

In 2019 L’Oréal achieved a number one ranking out of 6,000 companies worldwide in the Covalence ESG ranking. It was also present in most of the major corporate responsibility indexes 2018—In September of 2018 and 2019, L’Oréal has been recognized as Global Compact LEAD, one of the highest-engaged participants of the world’s largest corporate sustainability initiative, demonstrating L’Oréal’s ongoing commitment to the United Nations Global Compact and its Ten Principles for responsible business. In 2017, 2018 and 2019, the Group received the Transparency Grand Prix (Grand Prix de la Transparence).

“A company with a strong culture of integrity, where everyone feels free to speak up, is worth more, much more. “Only companies that have integrated ethics in their culture, strategy and day-to-day practices will be sustainable,” Mr. Lulin deeply believes.