Local firms learning how to survive from pandemic

Left Pocket Studio, an animation company based in Songjiang, has shifted its focus toward short videos, a sector consuming less lead time, while cooperating with a face mask manufacturer in producing children’s face masks with Left Pocket’s cartoon figures.

Since its establishment in 2012, the company has achieved fruitful results at home by creating original animation series including “Mini Mind Warriors” and “Emmy GooRoo.”

Its overseas distribution of content covers countries and regions including Finland, Argentina, the Netherlands, the Middle East and North Africa. “Emmy GooRoo” won the 2014 MIP Junior International Pitch top award in France. It was Asia’s first original animation work to win the prize.

“Our company is called Left Pocket, because the left pocket of a jacket is the nearest place to one’s heart, suggesting our company will whole-heartedly produce the most sincere work for our viewers,” said Yu Xin, the studio’s CEO.

The sudden COVID-19 outbreak, however, plunged the company, like many other small and medium-sized companies, into crisis.

“The spring TV trade fair of MIPTV 2020 has been canceled, and we don’t know if this year’s Annecy International Animated Film Festival in June will be held as scheduled. All the important international trade platforms in the first half of this year are at a standstill,” said Yu.

City and district-level policies, including postponing paying housing provident fund for employees, also won time for a turnaround for the company. 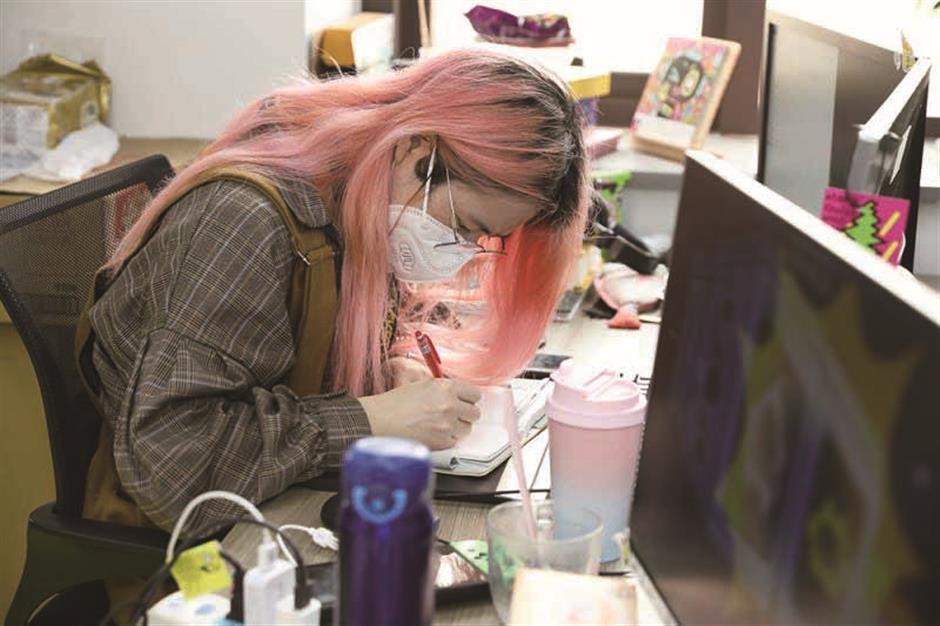 A designer at Left Pocket Studio takes notes at the company’s Songjiang office. 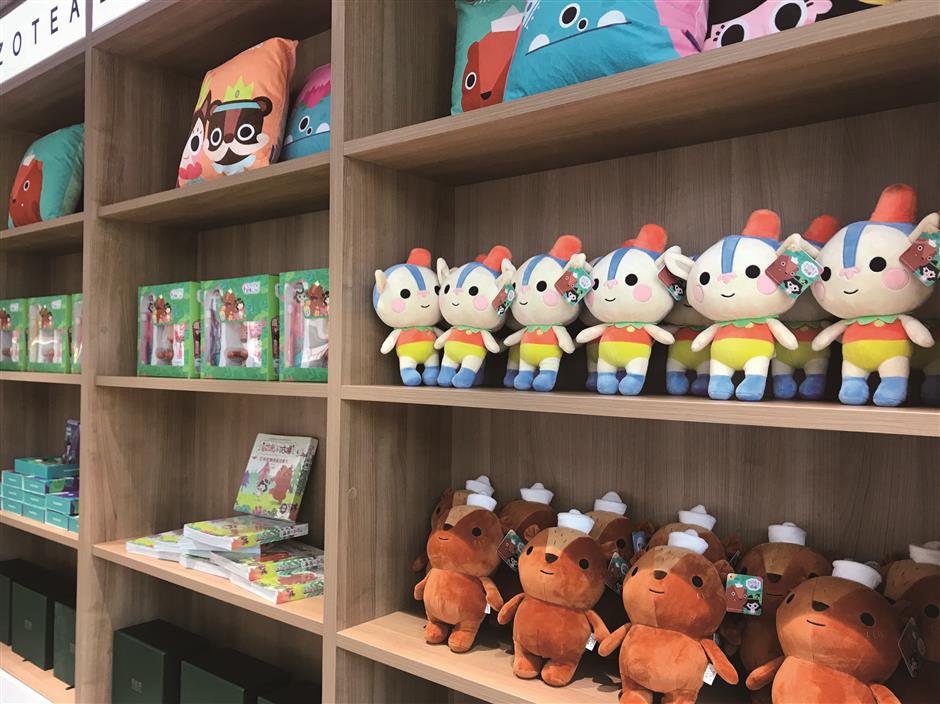 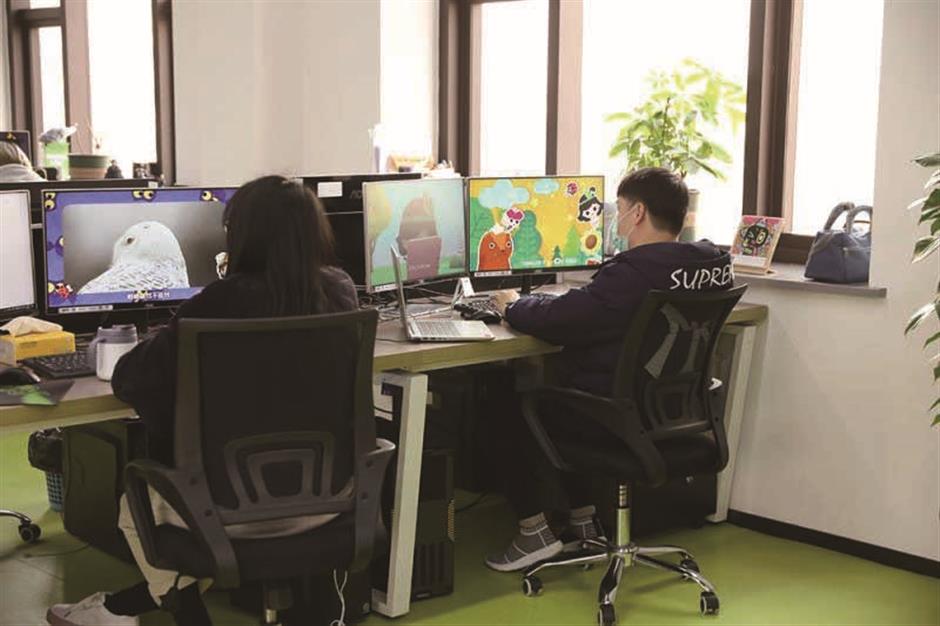 Staff of Left Pocket Studio work on their designs on computers.

Left Pocket Studio is also making efforts to rescue itself.

The company halted production of anything that required a long lead time and had a slow market return, and instead started to run projects with short product circle.

“A large number of children are staying at home and receiving e-learning, so a huge market of online education is formed. The current popular short videos consume less lead time and a business opportunity is revealed in spite of the COVID-19 pandemic,” said Yu.

“It took us just over a month to develop, produce and distribute the cartoon series, whereas our former animation works often needed a development circle of at least one or two years,” said Yu.

“To create a short video of several minutes is only an adjustment of production tools and forms, but the creation measure remains the same for us. And such an adjustment has helped us out from our dilemma,” Yu said.

So far the popular science animation has been launched on Youku’s children’s channel and its production team is seeking feedback from kindergarten teachers, parents and the broadcasting platform to improve the quality of future products.

The company is also cooperating with a high-tech company by authorizing its “Mini Mind Warriors” for use in the latter’s production of children’s face masks. The face masks are undergoing sampling and testing now.

To pay tribute to medical staff, community workers and volunteers who battled the COVID-19 virus and to pass on pandemic control and prevention knowledge, the company also made a large number of public-welfare posters, manga and animation short videos.

Diversification thaws out a frozen business

“All the former supply chain companies of Haisu’s are based in Shanghai. Impacted by the pandemic, however, Haisu is trying to form a more diversified supply chain to ensure its production,” said Cao Zhehui, Haisu’s deputy general manager.

Songjiang’s vision of G60 High-tech Corridor development, a blueprint encouraging integrated development of nine cities in the Yangtze River Delta region, paves the way for the company’s supply channel expansion, and also invites companies in the delta to join the rapid development of Shanghai’s economy.

The company also realized that customers’ demand existed in spite of the pandemic and it is only the consumption scenario that has changed.

So far all of the company’s dim sum products are available on Youcai, an online-to-offline food supplying platform affiliated to food delivery service company Ele.me. Haisu Food is also negotiating with other food supply platforms including Fresh Hippo and Dingdong in order to launch sales channels. 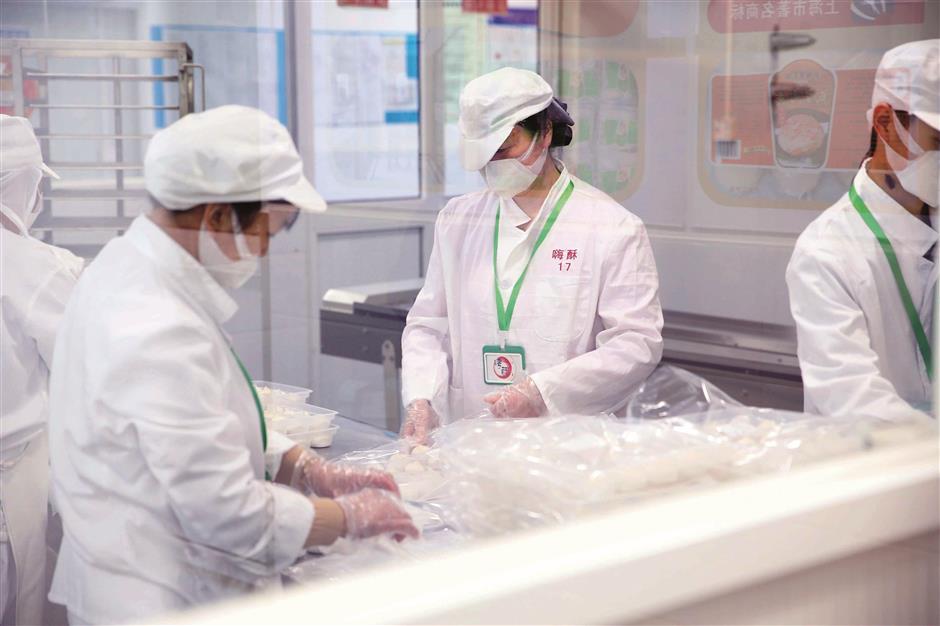 The company is also trying out livestream and adjusting its operation to an online market by developing new products and cooperating with cold chain logistics companies.

“Online demand keeps rising and our offline service is also recovering. I believe the company will turn better when the pandemic ends,” said Cao.

Founded in April 2016, Haisu Food’s main products include quick frozen food and ingredients. The company has been supplying traditional Shanghai-flavor food to Hongqiao and Pudong airports’ routes and to five-star hotels such as the Marriott. It has its own brick-and-mortar restaurants and is also cooperating with renowned Shanghai food groups including Xinghualou, Laodafang and Hongruixing. It had also supplied food to the news center during the first and second China International Import Expo in Shanghai in 2018 and 2019.

The COVID-19 crisis, however destructive, offered a breakthrough for Shanghai Huitian New Material Co, an adhesives and new material research, development and production company based in Songjiang, to expand its global business.

“The high-end global adhesives market used to be dominated by European, American and Japanese enterprises. Affected by the pandemic, our foreign competitors failed to meet market demand. So we grasped the opportunity and became some of our customers’ first choice,” said Zhang Feng, the company’s CEO.

The company’s adhesives were used in the construction of the Huoshenshan and Leishenshan hospitals when COVID-19 struck the central Chinese city of Wuhan.

“The makeshift hospitals are modular prefabricated constructions. The adhesives used to adhere the hospitals’ prefabricated houses to other materials were provided by Huitian New Material,” said Zhang.

When the plan to build the makeshift hospitals became known on January 25, Huitian New Material contacted the construction team and promised to donate all the adhesives that were needed to build the hospitals.

The company also established a support team to ensure the successful production and delivery of the adhesives.

On January 30, 10 tons of adhesives worth 1 million yuan (US$142,857) were donated to the hospitals and technicians from the company were also sent to the construction site to offer guidance. 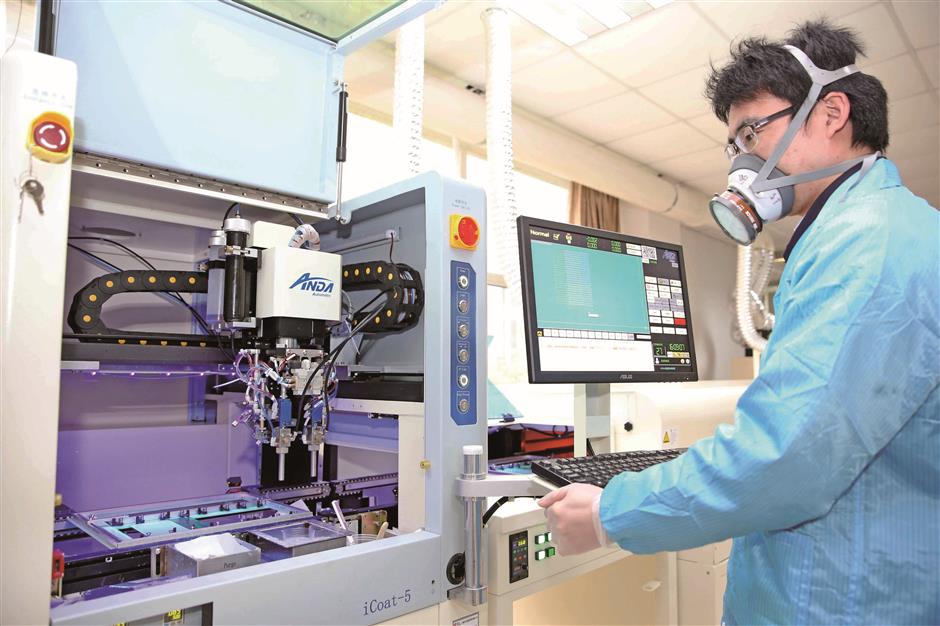 A technician at Shanghai Huitian New Material Co, an adhesives and new material research, development and production company in Songjiang, operates on a machine. 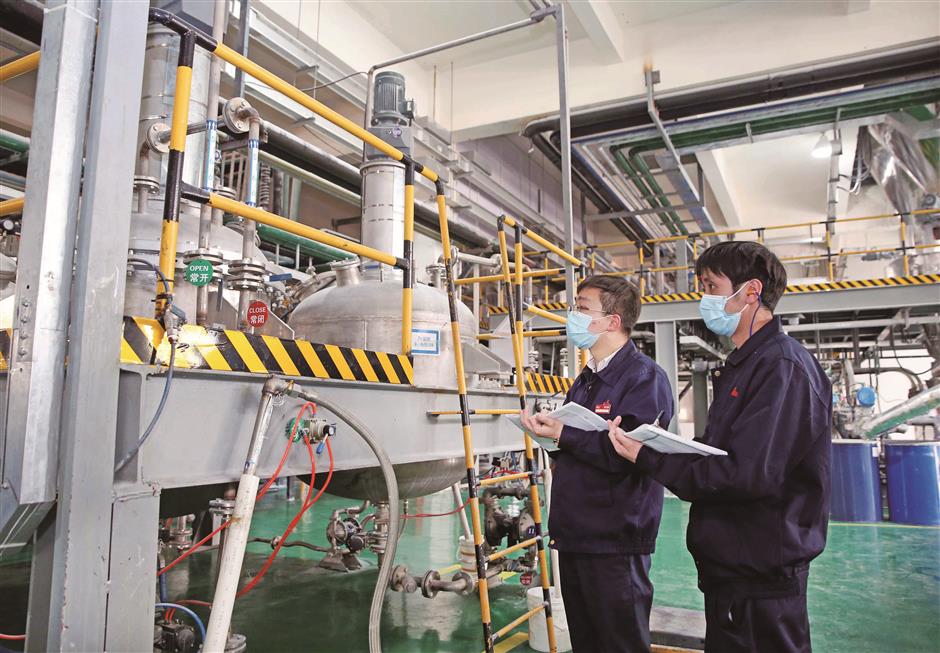 Technicians check how the machines operate before work resumption.

While assisting hospital construction in Wuhan, the company’s own production continued.

“A tough time tests a company’s production capability. Those who keep providing high-quality products timely stand out from the competition,” said Zhang.

Maintaining stable production during the pandemic, however, was not an easy task and the greatest challenge lay in a low job resumption rate.

“At the beginning fewer than 30 workers returned to their positions and one worker had to do a workload six times that of normal. The managerial staff also joined the frontline production work to ensure the stable operation of the production line,” said Zhang.

By mid-March all employees had resumed work.

Services to clients have also been carried out meticulously.

When informed that some of its clients had a shortage of pandemic prevention materials, the company immediately purchased face masks and instant thermometers and mailed them to its clients.

With the virus spreading overseas, high-end clients began to place orders with Huitian New Material as the company’s international competitors were suffering.