Welcoming The Year Of The Ox
Shot by Eastday.com. Edited by Zhong Youyang. Subtitles by Yang Yang.

Joe Schott was on a flight back to China when the novel coronavirus pandemic first broke out during last year's Spring Festival. The president and general manager of Shanghai Disney Resort then experienced the park’s unprecedented closure for 107 days. 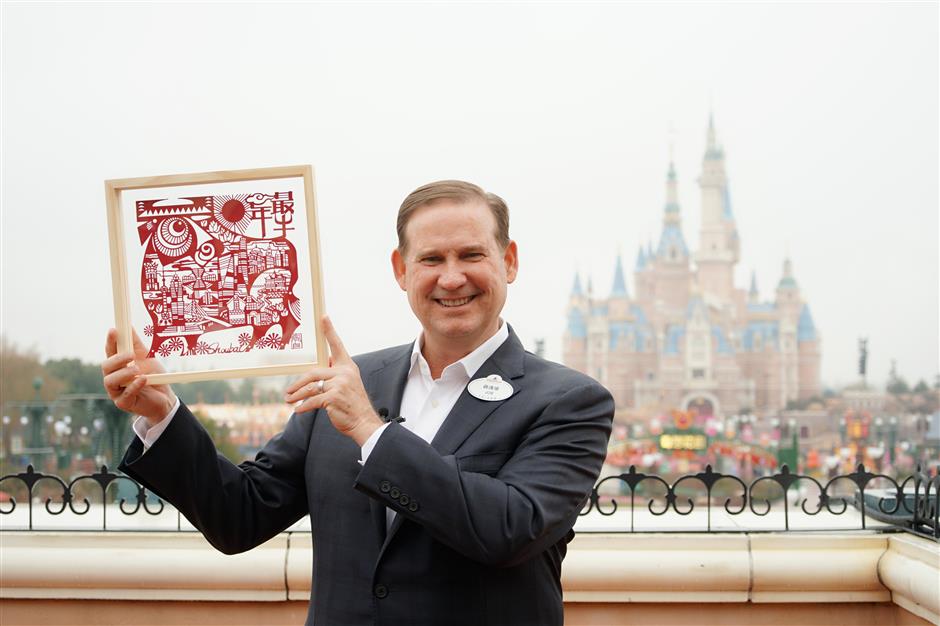 Joe Schott, president and general manager of Shanghai Disney Resort , receives a paper-cutting work by local artist Li Shoubai as a gift to celebrate the Chinese New Year. The gift is sent by the Shanghai People’s Association for Friendship with Foreign Countries to some senior executives of multinational companies in Shanghai. It features the Year of the Ox as well as symbolic scenery in the city like the Bund, Lujiazui, Yuyuan Garden and the National Exhibition and Convention Center (Shanghai).

This year, he is spending the holiday season with his local work family at Shanghai Disney Resort, delivering surprising celebrations for the Year of the Ox. His own family is separated due to the pandemic.

The park's Lunar New Year offerings include a special gala fireworks show, traditional Chinese performances and cuisines fused with Disney elements, the return of a Shanghainese version of “Once Upon a Time” and famed Disney characters like Mickey and Minnie decked out in new festive holiday outfits. Minnie’s best friend Clarabelle Cow also made her debut at Shanghai Disney.

Zootopia, the park's eighth themed land, had its structural topping-out in December. It is the first of its kind at any Disney Park, and a series of new surprises for Shanghai Disney's fifth anniversary are expected — a sign of the company’s strong confidence in China’s economic recovery and potential.

“We haven’t stopped developing,” Schott said. “We are extraordinarily ambitious about where we are going. We want to be a major draw for Shanghai to attract people and be one of the principal reasons for people to visit the city.”

Having worked in Shanghai for three years, Schott has found warmth and energy all the way through the tourism industry in China.

“We are expecting that when China and the rest of the world are completely back to normal, there will be a lot of demand from people wanting to visit tourist sites, and we hope we will be at the top of their list,” he said. “We invested a lot here because we recognized the potential of the industry in China, which is huge. People need that joy and happiness in their lives, and we can be a very important player in keeping people in a happy state.”

Tourism has been among the hardest-hit industries during the pandemic, and Schott considers the Shanghai attraction’s reopening on May 11 as his most challenging and emotional experience in nearly 40 years with the company. He also called it a “beacon of hope, for not just China, but the rest of the world.”

The Shanghai park was the only Disney parks that was open at the time. 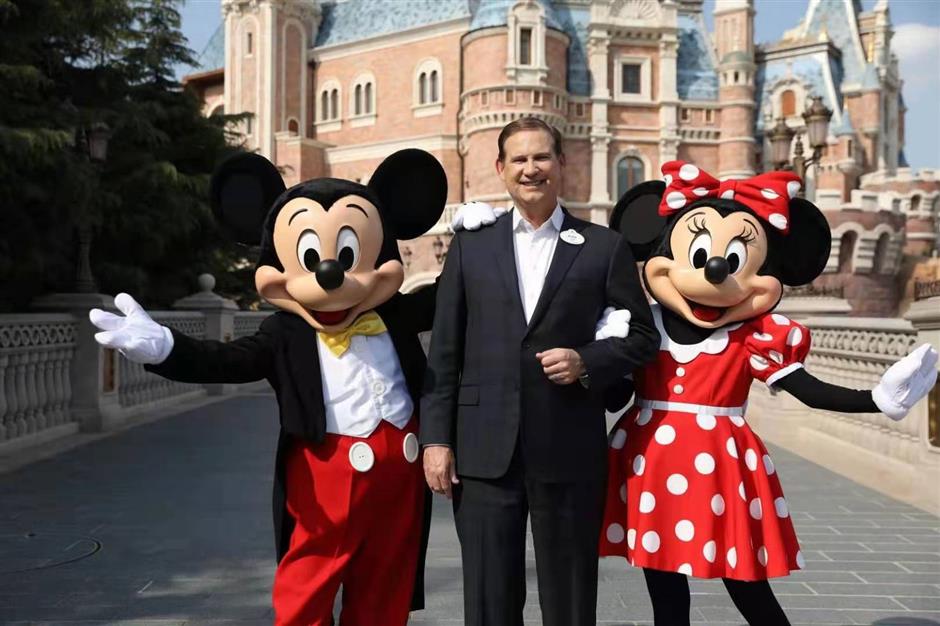 Joe Schott with Mickey and Minnie

“I have seen many things happened at Disney — anniversaries, park openings — but nothing was nearly as emotional as that was,” he said. “We were the first park in the world to close, but we were also the first Disney park in the world to reopen. With our work with the local government in particular, setting guidelines for what was safe and still magical in response, we set the groundwork for every Disney park around the world.”

Every decision was unprecedented and challenging to the company’s tradition and way of its running business, such as asking Cast Members to wear masks.

For the 107 days it was closed, Schott and his staff worked with local government officials to establish safety guidelines to prepare for reopening.

When the resort reopened, the number of visitors was limited to about 20 percent of capacity, social distance and masks were required at all times and people's temperatures were taken, among other safety measures. Schott was only one of many who felt emotional that day. Many employees and visitors broke into tears, seeing it as a sign that the city was safe and sound.

Celebrating its fifth anniversary this year, Disney’s largest international expansion has become integrated into the city beyond tourism.

In tune with the city’s growing number of seniors and increasing measures to take care of them, the resort launched a senior seasonal pass on the Double Ninth Festival last year. For Chinese, it was a day to honor the elderly.

As the city is on its way to becoming a global science and technology hub, animatronics like the huge, vivid and speedy Davey Jones in “Pirates of the Caribbean,” Schott’s favorite ride, can now be built for the first time in Shanghai.

“We are the only site in the world to deliver new animatronics, part of the technological advances that are coming out of China,” he said.

The park was also the first to develop a reservation system fully accessible on mobile devices, a virtual standby pass, and other services on mobile phones that Chinese guests would expect.

“The things that guests expect in every place because of how technology has advanced in China, especially in Shanghai, is that the mobile device is the center of your world,” he said. “We have to fully embrace this reality, and you will see a lot more of that kind of work.”

Having worked at various Disney parks, including Tokyo and Paris, he considers Shanghai’s business environment to be filled with warmth and speed.

He added that the local government was doing everything possible to help encourage domestic consumption. One example is infrastructure expansion that makes it easier for people to come to the city and enjoy everything it has to offer.

He also highlighted access to talent, noting employee's education base and ability to learn very quickly, making his staff “probably the best people I’ve worked with in my career,” Schott said.

“Nothing moves as fast as China,” he said. “In my three years here, it's remarkable how quickly things have changed. We have to constantly learn about what’s new.”