Spring is in the air and the city is blooming with an array of bright colors. But the Wuliqiao Subdistrict is embellished by an autumn palette.

Two rows of umbrellas printed with ginkgo leaves and insects open like ginkgo trees in a lane tucked away in the brick-and-glass structures of Bridge 8, a creative industry park transformed from old factory workshops.

Light filters through the umbrellas, giving a soft yellow tinge. Under the umbrellas, people can feel as if they are in the dappled shade of ginkgo trees. Looking up, the internal canopy is printed with drawings of the community and the slogan “recycle me and see you again.” 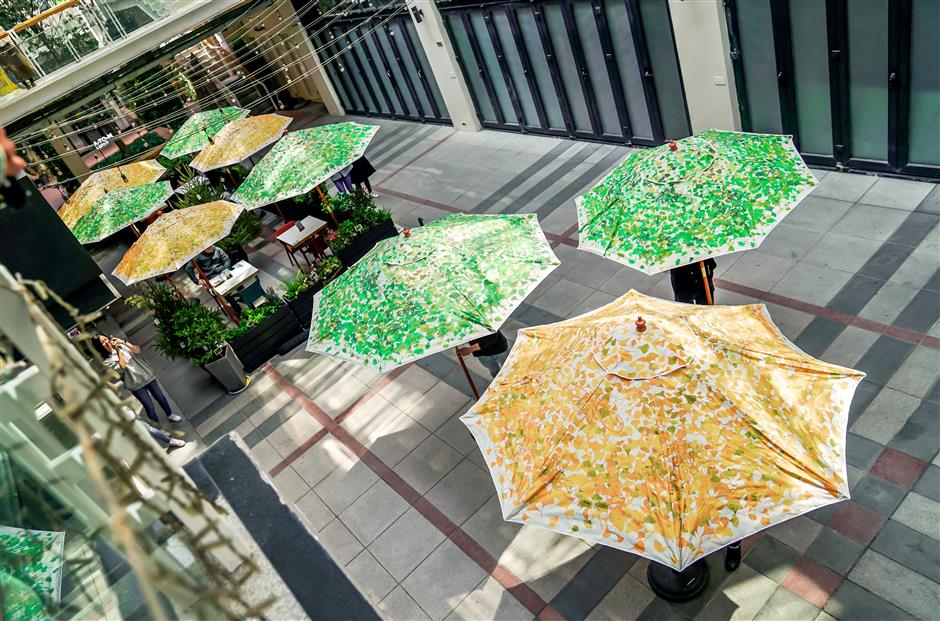 Coca-Cola China has turned recycled plastic bottles into umbrellas at the Bridge 8 creative park in the Wuliqiao Subdistrict.

The outdoor umbrellas, with fabric made from recycled plastic bottles, are the fruit of the “World Without Waste @ Sustainable Communities” eco-friendly campaign launched by the subdistrict and Coca-Cola China in September 2020.

The one-year campaign, with activities that include exhibitions, is designed to educate residents on how to recycle plastic bottles and give them a new lease of life and to promote a sustainable lifestyle.

The company has created a series of products made from recycled plastic bottles, including bags, T-shirts, suits and scarves. Recently, it used recycled PET fabrics to make furniture such as a table and chair.

“As you can see, one plastic bottle has a long life cycle,” Wang said.

She said Shanghai has been doing a great job in waste collecting and recycling, making it easier for Coca-Cola China to obtain enough material for the umbrellas.

A 2.1-meter-in-diameter umbrella is made from 58 bottles and a larger one, with a diameter of 2.7 meters, is made from 90 bottles.

Daker Tsoi, one of the three designers of the umbrellas, said outdoor umbrellas can blend into their surroundings and be put anywhere, on street corners or outside coffee shops.

“It’s very important that people can see and use them in the community. Then they will get to know the stories behind these umbrellas,” he said. “And they will be surprised to find what they recycle can return with a new look, and even become part of their life.” 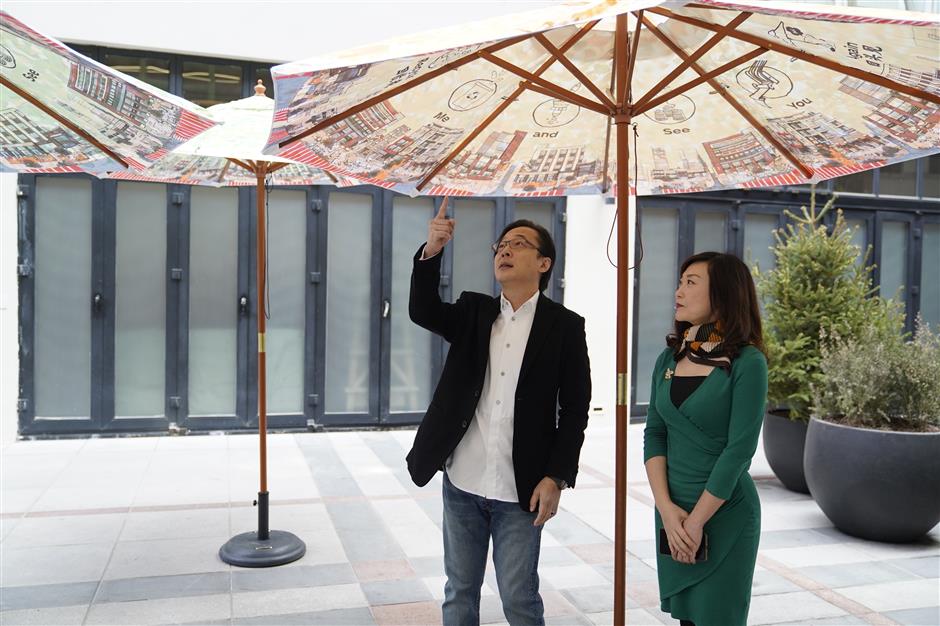 Wang Xingrong (right), general manager of corporate communications of Coca-Cola China, and designer Daker Tsoi, founder of Lifestyle Creating, point out the “recycle me and see you again” design inside the umbrellas.

Tsoi said the design was inspired by ginkgo trees on Jumen Road. He’s looking forward to seeing autumn coming when people will be able to appreciate the leaves on the umbrellas above their heads and crispy fallen foliage beneath their feet.

“It will create an organic combination of nature and city, and there will be a vibrancy,” he said.

Wang said Coca-Cola China is well on its way to achieve the “World Without Waste” sustainable packaging vision initiated by Coca-Cola CEO James Quincey in 2018.

In line with that vision, Coca-Cola aims to collect and recycle a bottle or can for every one it sells and make 100 percent of its packaging recyclable. 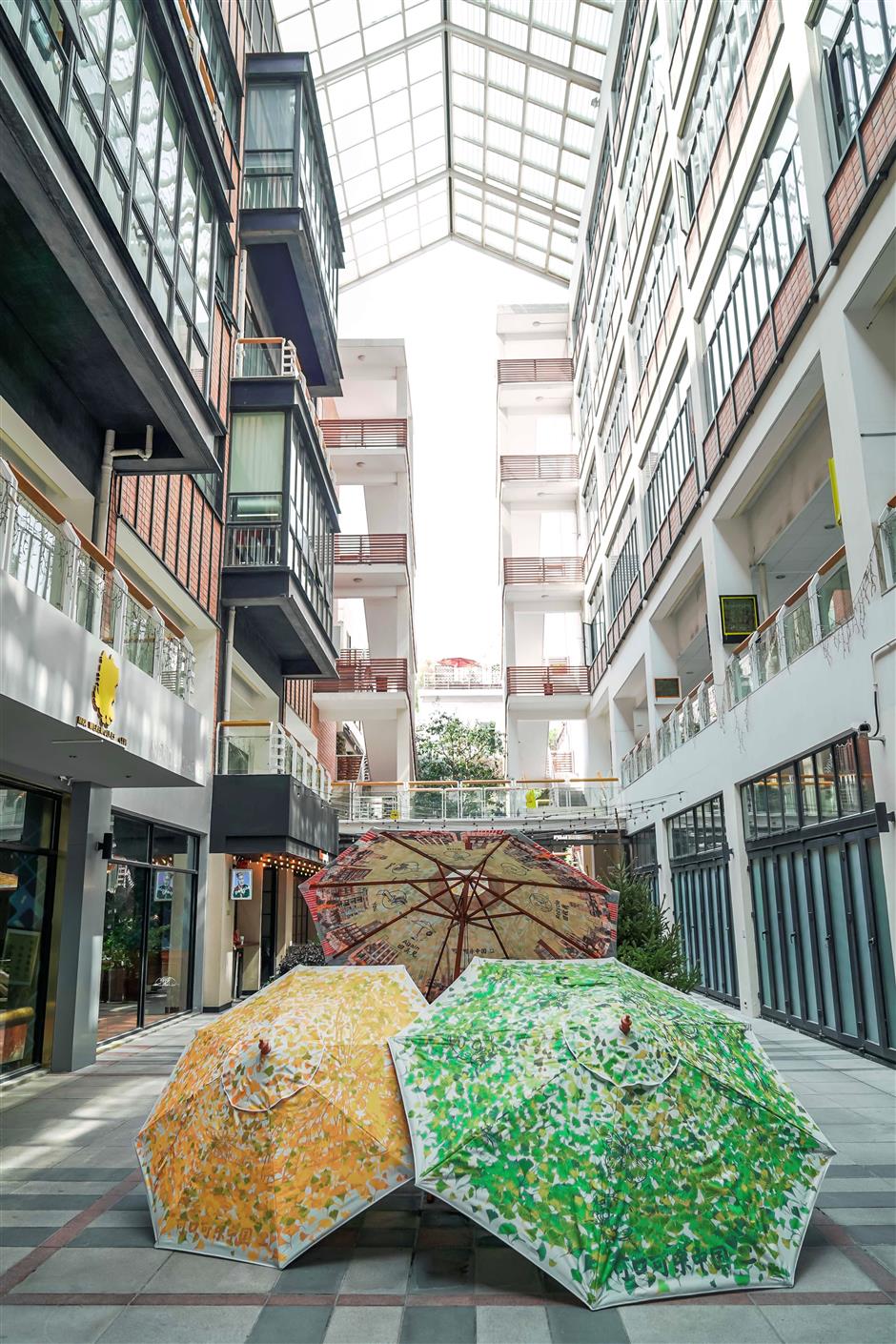 Printed with ginkgo leaves and insects, the umbrellas add a natural charm against a backdrop of the brick-and-glass structures of Bridge 8 transformed from old factory workshops.