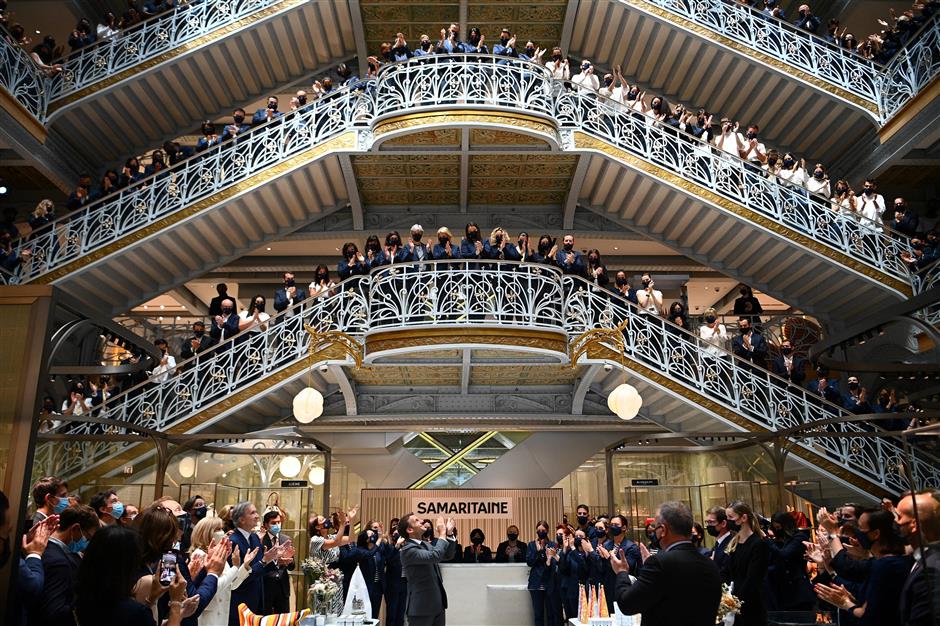 French President Emmanuel Macron (center) and employees of Paris' Iconic department store La Samaritaine applaud during a ceremony marking the store's reopening after 16 years of closure, on Monday in Paris.

Parisians will once again be able to stroll the gilded aisles of the Samaritaine department store starting today, after 16 years of painstaking work to restore the Art Deco and Art Nouveau landmark to its former glory.

Once a retail anchor for the historic core of the French capital between the Louvre and Notre-Dame, by then it was losing money and customers no longer interested in its pitch: "You can find everything at La Samaritaine."

"It was dying," the store's chief Jean-Jacques Guiony told media on Monday, when President Emmanuel Macron visited for the restored site's inauguration.

Macron, touring alongside Bernard Arnault, LVMH's chief and one of the world's richest people, called it "a stunning French cultural treasure."

For the revamp, LVMH shrank the floor space in the flagship building, a classified monument, by a third and took its offerings firmly upmarket – applying the formula at Le Bon Marche, LVMH's other temple of luxe in Paris.

Gone is the hunting gear, housewares, tools and toys, despite the historic signs still on the facade. Instead, think designer fashion labels, an entire floor dedicated to swank watches, two concept stores and a vast beauty and cosmetics department in the basement.

Restaurants, bars and food offerings like Street Caviar by Prunier are spread throughout, while a Cheval Blanc hotel opening in September will offer Seine views and a restaurant with Michelin-starred Arnaud Donckele at the helm.

Rooms start at 1,150 euros (US$1,400) a night, and the two-story rooftop penthouse will have its own pool, spa and cinema. Price upon request.

Opened in 1870 by Ernest Cognac, a travelling salesman, and expanded with his wife Louise Jay, the four Samaritaine stores became a fixture of Paris culminating in a 1930s golden age. He named it La Samaritaine after a pump on the nearby Pont Neuf bridge that depicted the Gospel story of the woman of Samaria offering water to Jesus.

It's the bridge Matt Damon's character spies on from the Samaritaine's roof in the 2002 thriller "The Bourne Identity" – though the huge lettered sign he stands behind won't be replaced.

The work was originally expected to last three to six years, but delays emerged as LVMH sought out hundreds of artisans across France capable of restoring mosaics and other artworks.

They also discovered that an elegant, golden-hued peacock fresco, an Art Nouveau masterpiece extending along the walls under the glass atrium roof, had been covered in white paint in the 1990s.

A court battle with residential and heritage groups angry over a new undulating glass facade on one section, designed by the Pritzker-winning Japanese firm Sanaa, also went to France's top court before LVMH could proceed.