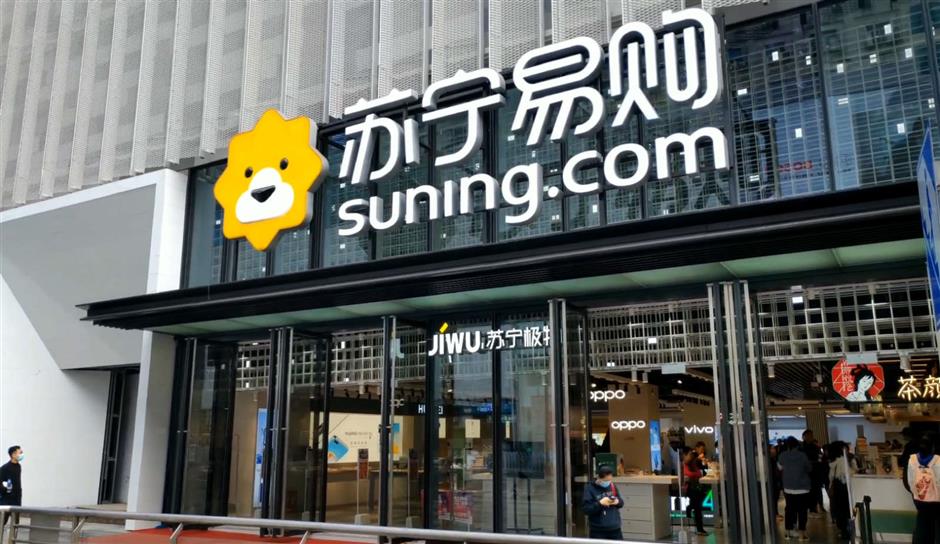 A consortium made up of 10 investors, including Jiangsu's state-backed equity investment firm as well as local technology and appliance companies, will pay a total of 2.88 billion yuan for a 16.96 percent stake of Suning.

Retailer Suning.com jumped 10 percent on Tuesday after more than two weeks of a trading halt, as investors remain upbeat on the company's business prospects after state-backed assets became shareholders.

Its shares surged the daily limit to close at 6.15 yuan (97 US cents)on Tuesday.

A consortium made up of 10 investors, including Jiangsu's state-backed equity investment firm as well as local technology and appliance companies, will pay a total of 2.88 billion yuan for a 16.96 percent stake of Suning, according to a stock exchange filing.

A new retail development fund was set up with state-owned asset management companies owned by the governments of Jiangsu Province and the city of Nanjing, as well as companies including Alibaba, Xiaomi, Haier, Midea and TCL.

A string of efforts have been made to relieve the company's debt pressure since the second half of 2020.

Suning Chairman Zhang Jindong will have 17.62 percent of voting rights following the shareholding structure change, followed by the consortium's 16.96 percent.

Suning said in a statement that the new shareholder structure will help it stabilize business operations and corporate governance, as well as bolster its strategy to serve as a retailing service provider.

Suning also said it will push forward with new store openings through its Suning Retail Cloud subsidiary, with a target of 900 new openings in the next three months focused on the home-furnishing store model to explore new business formats.

It warned of net losses of up to 3.2 billion yuan for the first half of the year.

Faced with challenges and a slump of more than 30 percent in sales revenues for the second quarter year-on-year, the company warned in a preliminary earnings release yesterday that it would see a substantial decline in gross earnings.