Austrian tech firm AT&S and Shanghai University on Thursday announced they would establish a digital transformation innovation center in Shanghai to boost collaboration and research on digitalization and smart manufacturing development.

It fits Shanghai's long-term strategy to become a global capital for digitalization by 2035.

The city is developing its digital economy and upgrading infrastructure for industrial and other sectors with innovations in chips, new materials, artificial intelligence and the Internet of Things.

AT&S (China) Co and the Mechatronic Engineering and Automation School of Shanghai University signed the cooperation agreement on Thursday.

They will establish a digital transformation innovation center and collaborate on a range of academic and educational programs, including internships, talent recruitment and joint research into digitalization and smart manufacturing.

AT&S will be able to leverage Shanghai University's talented students and outstanding faculty for expertise in digital technologies.

Shanghai University will benefit from AT&S' interconnected technologies and its market and commercialization expertise.

AVI machines use cameras to detect defects on boards.

AT&S is a major electronics component supplier for PCBs – printer circuit boards – and integrated circuit substrate, which are used in chips and electronic devices.

It has invested in China to build factories in Shanghai and Chongqing City.

AT&S is to invest 450 million euros (US$550 million) in expanding capacity in the fiscal year from April, mainly in its Chongqing factory.

Shanghai University is always open to international cooperation and research collaboration with businesses.

China is the most important trading partner for Austria in Asia.

Consequently, a considerable number of Austrian companies have been investing in China, with "no short term ventures but stable investments", said Christina Schosser, Consul of Commercial Affairs of the consulate. 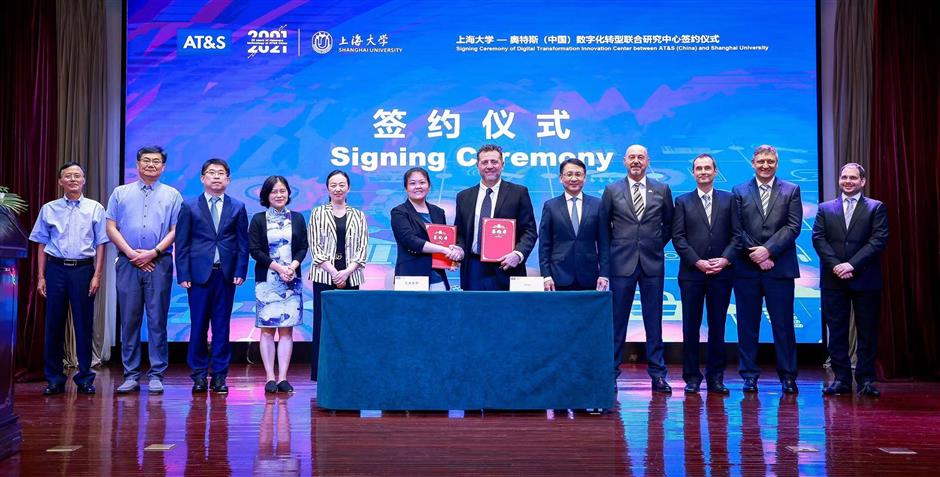 The signing ceremony is witnessed by officials from the Shanghai Association for Science & Technology and the Austrian Consulate in Shanghai.