Applications of coating technology in wind turbine blades to improve power generation efficiency under low wind speed is among the 13 projects chemical giant BASF has launched with its Sustainability Covalence league partners, Shanghai Daily learned during a launch ceremony of the league at G60 Rafael Sky City in Songjiang District on October 19.

The power generation and heating industries accounted for 51 percent of total carbon dioxide emissions in China in 2018, according to statistics released by the International Energy Agency.

Wind power, an environmentally friendly way of generating electricity, is an essential alternative to the country's dominant coal power.

"We've been focusing on developing wind turbine blades for years and have formed a strategic cooperation with BASF," said Jiang Lei, vice chairman of Techstorm, a new material company based in Lingang of the Pudong New Area and a member of the Sustainability Covalence league. 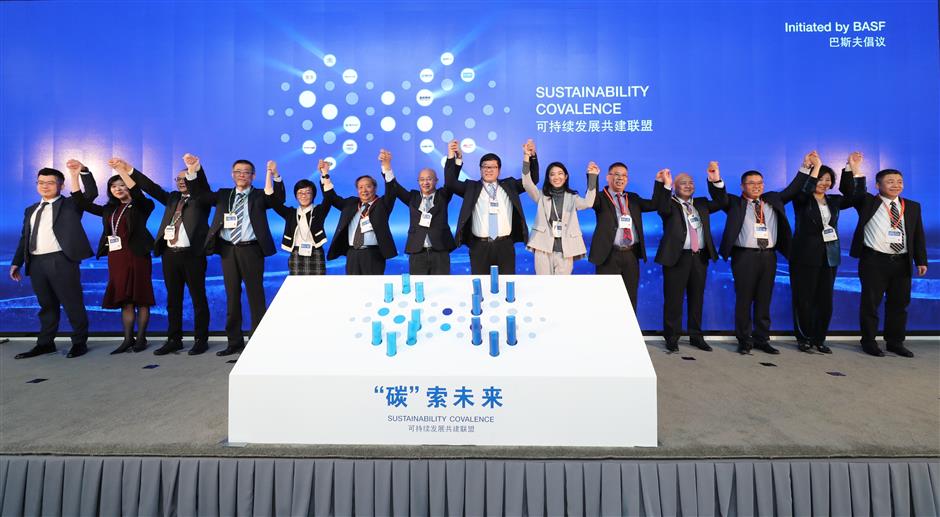 The league, an alliance of 14 founding partners including BASF, COMIY, Rokin Logistics, Snow Breweries, Sino Trans and Techstorm, aims to promote sustainable growth by taking joint actions in areas of low-carbon development, circular economy and cooperation between upper, middle and lower reaches of the industrial value chain. Covalence, a chemical word meaning "valence" (the degree of the combining power of a certain element) characterized by sharing of electrons, stands for the members' shared vision to promote sustainable growth for China and contribute to the country's carbon neutrality and green development vision.

"Raw material, basic chemistry and energy suppliers in the upper reach, product manufacturers in the middle reach and service providers like logistics, storage and transport companies in the lower reach of the industrial value chain jointly make it possible to create sustainable development. Previously, many companies cared about their own development rather than considering the entire value chain," said Zheng Daqing, senior vice president of BASF.

"While selecting our raw material suppliers, we consider whether their products are safer, more environmentally friendly and generate less greenhouse gas. And we also prefer those service providers who carry out the same beliefs on low-carbon emissions and environmental protection," Zheng added.

The European company has been a consistent practitioner of carbon reduction. From 1990 to 2018, BASF's carbon dioxide emissions were reduced by 50 percent while doubling its production capacity. It will further cut its greenhouse gas emissions by a quarter by 2030 from 2018, and reach net-zero emissions by 2050.

Anhui Huaheng Biological Engineering Co is one of the pioneering members of BASF's global supplier Carbon Management Program. It is responsible for carrying out full Life Cycle Assessments (LCA) of the carbon footprint of products purchased by BASF.

"I quit my job at a basic chemistry plant 16 years ago and started my own business in synthetic biology. I didn't even know the term 'synthetic biology' at that time and only knew that I like chemistry and wanted to focus on it, but in an environmentally friendly way. We chose alanine as our research and business orientation in 2005. When we fully developed related technologies in 2010, we found BASF already had an application condition. It is a kind of global giant company that is always well prepared," said Guo Henghua, general manager of Huaheng Biological Engineering Co.

Another partnership is between BASF and Shanghai COMIY Biotechnology, and focuses on improving husbandry efficiency.