Besides showing off its star products and technologies, Covestro, as a newcomer, treasures the China International Import Expo as a great platform to increase engagement with partners and customers in its largest market.

During this year's 4th edition of the CIIE, Covestro also announced several new developments to show its further commitment to the China market, including the plan to build a new factory in Shanghai and inking a new partnership with a leading organic chemistry research institute.

"For foreign companies, the CIIE is not only an important occasion to increase brand awareness, but it also helps build closer bonds with partners and consumers to jointly drive business growth in China," said Dr Markus Steilemann, CEO of Covestro. 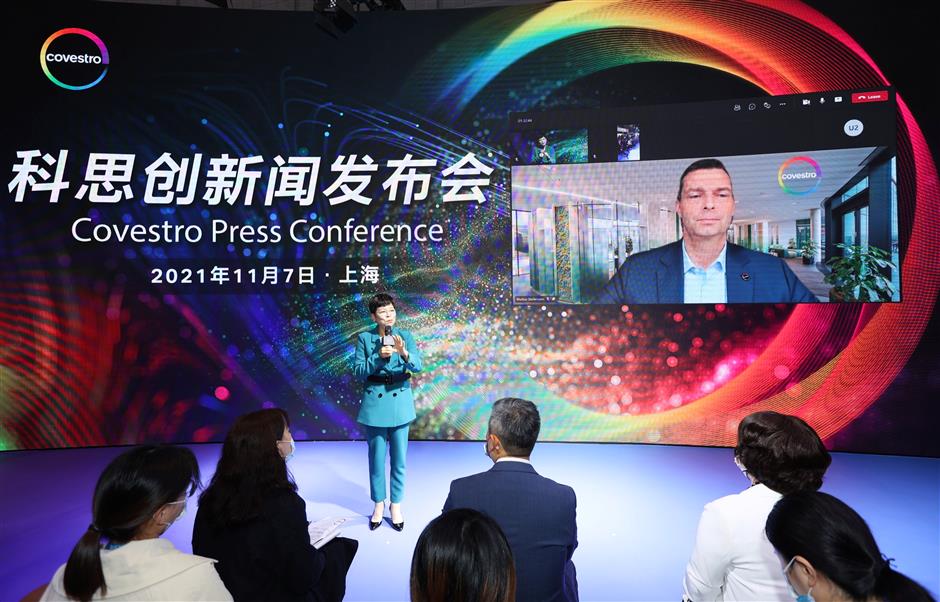 Holly Lei, president of Covestro China, delivers a speech at the press conference held at the 4th CIIE with Dr Markus Steilemann, CEO of Covestro, seen via a video link.

Further vote of confidence in China

Covestro plans to build a new plant for polyurethane elastomer systems in Shanghai amid rising global demand, especially in Asia Pacific, the German company announced during the CIIE.

"This investment represents a further vote of confidence and commitment to the China market, where we believe our elastomers and other high-tech materials solutions can contribute to the nation's sustainable development and carbon neutral ambitions," said Holly Lei, president of Covestro China.

With the new facility, Covestro will be able to meet the rising demand in Asia Pacific for polyurethane elastomers, used in a wide variety of industries ranging from solar to offshore wind energy and material handling. The plant, to be built inside the Covestro Integrated Site Shanghai, is expected to become operational in 2023.

"Polyurethane elastomers are the solution of choice for many applications due to their excellent performance, and we see strong growth, in particular, in the sustainable energy sector," said Thomas Braig, head of Covestro's Elastomers segment. "The new plant will further enhance our capacity to serve our customers and fits Covestro's sustainable future strategy."

Meanwhile, Covestro signed a new partnership with the Shanghai Institute of Organic Chemistry (SIOC) under the Chinese Academy of Sciences during the CIIE to explore and seek effective solutions to the challenges in the polymer chemical materials field, especially those related to sustainability and the circular economy.

The company and its long-time partner Tongji University have also signed a new agreement for another five years of cooperation for their Covestro-Tongji Innovation Academy, building on a decade of successful cooperation.

"With the new partnership with the SIOC and the extension of the Covestro-Tongji Innovation Academy, we will continue to foster open innovation initiatives with a focus on the circular economy," said Dr Michael Schmidt, Covestro's head of Global Innovation Management & Group Innovation Asia Pacific.

The partnership with SIOC will be focused on scalable chemical recycling technologies, Schmidt said in an interview, adding the new cooperation will add to the company's global network of industry-academia cooperation which will help Covestro accelerate its R&D agenda.

At the CIIE, Covestro also secured its first commercial order in Asia Pacific for its more sustainable ISCC PLUS-certified polyurethane raw material MDI with China's Huafon Group. MDI can be used in apparels and automotive interiors, among other applications, and can also be deployed to provide efficient thermal insulation for refrigeration appliances and buildings.

Covestro earlier received the ISCC PLUS certification for its Shanghai production site, enabling it to offer Asia Pacific customers large volumes of such MDI with alternative feedstock attributed via mass balance.

"We have been looking to using more sustainable, low-carbon raw materials in our products, and with Covestro's offering, we can together reduce greenhouse gas emissions across the entire value chain," said You Feiyu, chairman of Huafon Group.

Furthermore, Covestro signed several cooperation agreements with companies such as Chinese automotive assembly company Yanfeng and appliance maker Haier at the expo, to jointly advance sustainability efforts and support downstream industries in China in their journey to a circular and climate-neutral future. 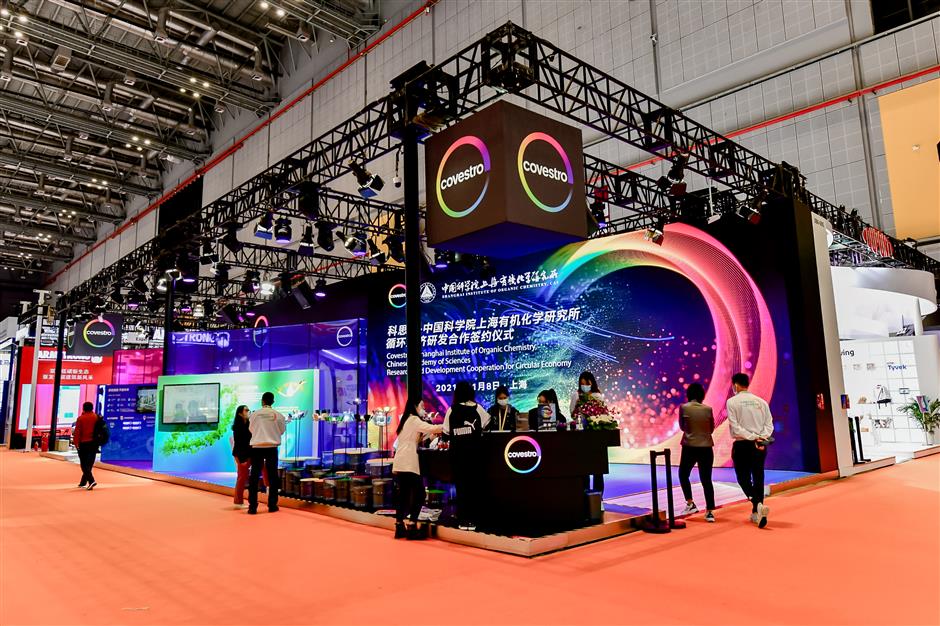 Covestro made its debut at the 4th CIIE.

Under the theme of "Pioneering a Circular Economy for a Climate-Neutral Future," the materials manufacturer has been showcasing cutting-edge solutions and technologies centered around the circular economy at the CIIE – including the use of carbon dioxide as an alternative raw material, bio-based feedstocks that replace fossil resources, and a breakthrough process for the chemical recycling of polyurethane mattress foam. Sustainable materials solutions for a wide range of industries including auto, renewable energy, electrical and electronics, and green building are also on display.

Covestro is aiming at contributing to making the circular economy a worldwide guiding principle, particularly in China. In this regard there is a perfect fit between Covestro and China, which wants to peak on its carbon dioxide emissions before 2030, and achieve carbon neutrality by 2060, Steilemann said.

"With our broad portfolio focused on the circular economy in various industries, we are strategically well positioned to support China's sustainable development, particularly the country's ambitions to become carbon neutral," Steilemann said. "Our vision to become fully circular is in line with China's megatrends, as we recognize that China will play a key role in the transition to a circular economy." 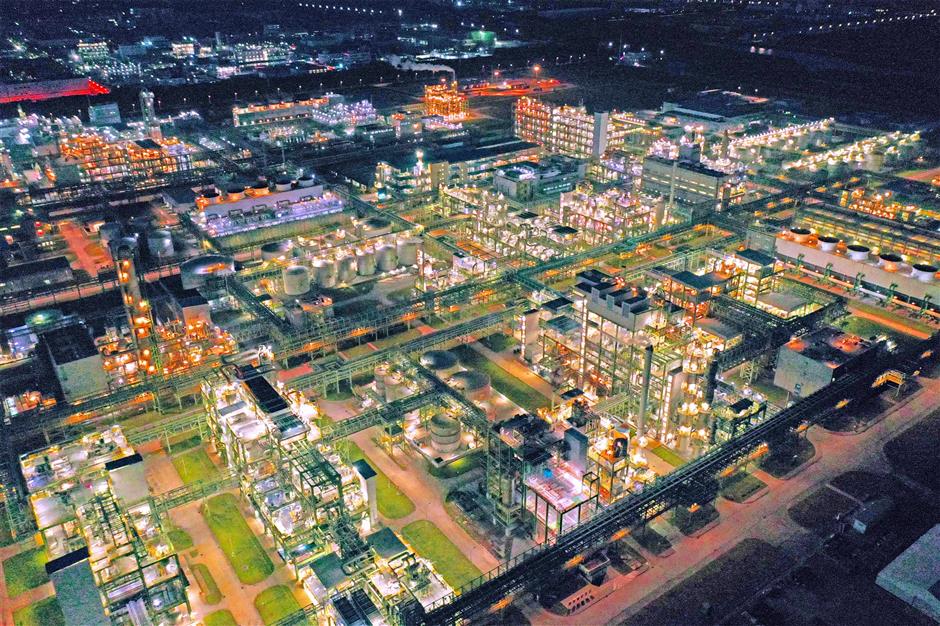 A night view of Covestro's integrated production site in Shanghai.

Covestro has a long-standing commitment to China and this year's attendance at the CIIE is further proof of that. Twenty years ago, the company broke ground on its integrated production site and opened its R&D center here in Shanghai. Today, the production site has become Covestro's largest worldwide and the R&D center is its APAC innovation hub, while China has become the company's largest single market, accounting for more than a fifth of the group's total sales. In Shanghai, the company also has the global headquarters of one of its businesses, responsible for Engineering Plastics.