Winners of the 2022 edition of the Michelin Guide Shangha

The announcement of the Michelin Guide's latest China awards resembled an Oscars ceremony as excited chefs and restaurant owners took the stage to receive their honors.

The Michelin Guide Shanghai 2022 was unveiled on November 12. Candidates were waiting anxiously, and when the top Michelin-starred restaurants were named, the audience burst into thundering applause. The winners couldn't help but hug each other.

Altogether, the 2022 edition of the Michelin Guide Shanghai chose 129 restaurants, two of which received the highest accolade of three Michelin stars (worth a special journey); eight two stars (worth a detour), 37 one star (worth a stop) and 20 were named Bib Gourmand restaurants.

"The Michelin Guide's aim is to provide unique and pleasant food experiences for consumers. By continuously exploring delicacies in different regions, we enrich people's catering life, and help consumers establish emotional bonds with us," said Kamran Vossoughi, president and CEO of Michelin China.

"Shanghai is the first location that Michelin Guide chose to enter the Chinese mainland six years ago. We are glad to see the prosperity and growth of the local catering industry," Vossoughi said.

"Our continuous exploration of Shanghai is embodied in the increasingly thick guide. Based on unified global criteria, our inspectors have recommended more and more high-quality delicacies to Chinese consumers, visitors and gourmets worldwide." 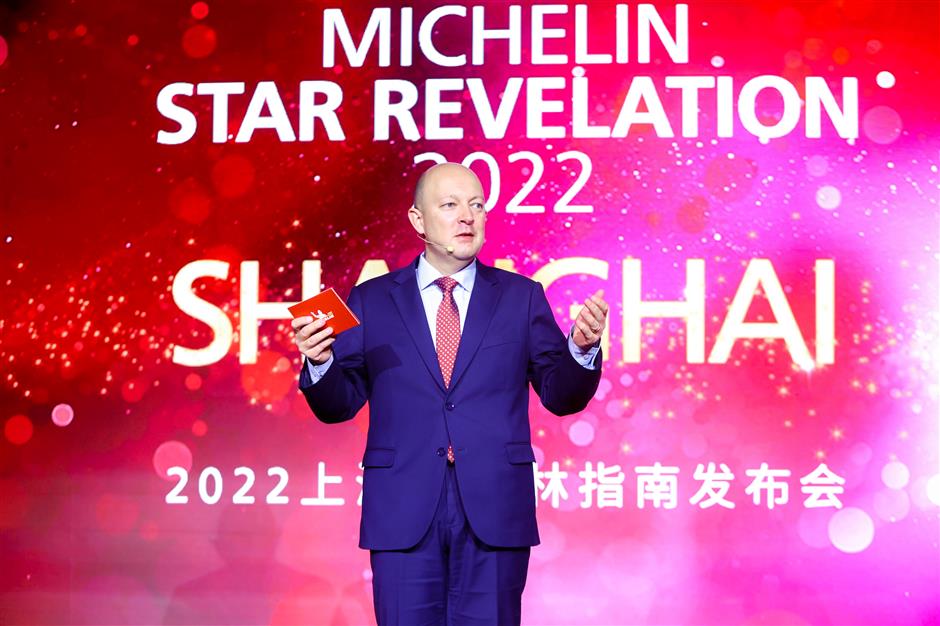 The 2017 edition of the Michelin Guide chose 122 restaurants in Shanghai. The guide has since become a platform to inspire more outstanding chefs to innovate and promote development of the catering industry.

"Shanghai is regarded as a magic city, and the magic did take place here with the city's outstanding restaurants, chefs, innovative cuisines and leading catering trends. Michelin is witnessing and participating in the growth of the catering industry in Shanghai, and we are very proud of that," Vossoughi said.

"Boosted by a strong, economic dynamism as well as a unique culinary know-how, Shanghai never ceases to attract the best talent in the world, shaping an innovative and must-see culinary destination," Poullennec said.

Michelin is also accelerating its digital transformation. The new Michelin Guide app will offer consumers all the information they need online.

"At the same time, we are gradually expanding cooperation with other platforms. For example, we have started to share high-quality content on Bilibili.com, the platform for young people," Vossoughi added.

Michelin Guide handed out its first Michelin Green Star for Shanghai in the new edition.

The award is for restaurants at the forefront of a more sustainable approach to gastronomy, offering dining experiences that combine culinary excellence with outstanding eco-friendly commitment. It is expected to be a source of inspiration, both for keen food lovers and the hospitality industry.

"Driven by an 'all sustainable' approach, we hope to create a more joyful and green catering experience for diners and extend this concept to the entire food and beverage industry in China," Vossoughi said.