TRAVELLING from Xinjiang in the remote northwest to Zhejiang on the east coast, Li Zibin is heading for his new job at a private company after ending his 14-year stint at China National Petroleum Corp, one of the country’s three largest oil refining and chemicals companies.

By relocating, the veteran specialist in chemical waste treatment was offered a higher-level post, coupled with more money and the opportunity to settle down in a richer city, where his children could receive a better education.

“The state-owned giants are no longer the best choice for China’s petrochemical workers,” Li said: “Instead, private companies broaden my horizon by assigning me a wider range of tasks and enabling me to work directly with customers.

“And they give me more incentives with lucrative rewards.”

Li’s personal story is the story of China’s petrochemical industry as state monopolies are broken down and thriving private sector companies take over, injecting new ideas, business methods and capital. It’s the story of the shift from state to private.

The dramatic growth of private companies and funds is pressing the long-monopolized Chinese oil refining and petrochemicals industry, creating a more competitive and active business model.

Forty percent of capacity was generated by private and local companies last year, according to IHS Markit, a London-based industrial consultancy.

Last month, at the eighth China Petroleum & Chemical International Conference in Shanghai, the “rise of private companies” starred, shining the spotlight on new investment opportunities in the petrochemical industry.

Before 2000, there were almost no large-scale private petrochemical companies in China. But by the end of 2015 a total of 16,212 private companies accounted for 47.3 percent of the industry’s annual profits, according to China Petroleum and Chemical Industry Federation.

Especially since 2009, private investment has surged in China’s petrochemical industry as the government lowered the barriers to entry for private companies.

“In fact most of the investment growth has come from private companies over the past 10 years,” said Paul Pang, vice president and Shanghai regional head at IHS Markit.

Private petrochemical companies are wresting control from state-owned giants over the industry through higher operational efficiency, boosting their share of the market and profits through higher product and service quality, and also luring top talent from government firms, Pang said. 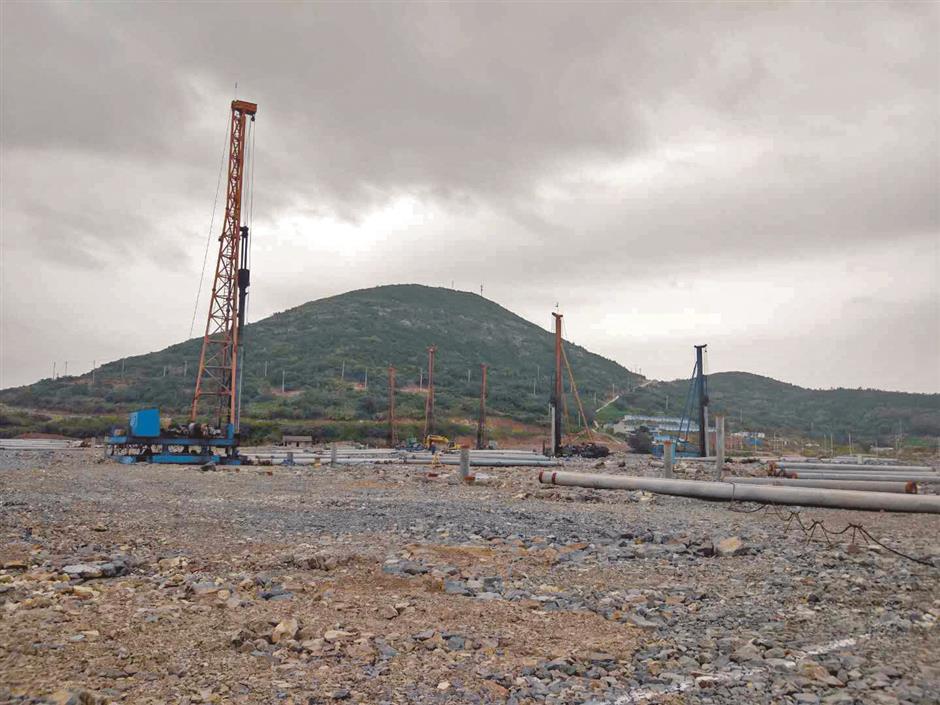 Pile drivers and engineering vehicles at Zhejiang Petroleum and Chemical Co’s site in Zhoushan port. The company plans to complete half its 40 million ton refining project in two years.

Li joined the Zhejiang Petroleum and Chemical Co in September. The company was established by Rongsheng Petrochemical Co, which teamed up with another three private companies in Zhejiang Province in 2015.

One of China’s largest chemical fiber companies, Rongsheng Petrochemical set up Zhejiang Petroleum and Chemical as its refining site to supply its raw materials.

Zhejiang Petroleum and Chemical is building a facility with a refining capacity of 40 million tons a year, the largest privately led petrochemical project in China’s history, with a US$15 billion in investment.

While previously it was hard for private companies to build an oil refining factory due to the extremely high investment required, “more of them nowadays can manage after years of wealth accumulation,” Li said. “It is also thanks to policy support.”

Of the US$15 billion, 30 percent came from the founders, with the rest from banks following the government’s call for supporting private companies in the “real economy” — production rather than speculation and financial plays.

Two decades ago, China’s petrochemical industry was almost fully controlled by the government, because it needs massive and long-term investment and is strategically important militarily, said Pang.

“But the government has been loosening its whip, faced with rapidly growing demand, especially since the turn of the century,” he said.

Commodities such as ethylene, propylene and aromatics — widely used in everything from cars to plastic bottles — were for long in short supply in China, said Pang.

“Partly because the domestic economy soared and production capacity growth has fallen behind demand.”

Now, with increased activity by private companies, along with improved technology, about 90 percent of the ethylene and propylene used in China is produced domestically, ending the era of relying on imports.

Su Wenli, vice president of Shandong Bin Yang Gasification Co, a local chemical major, said local companies now work faster than foreign players, as “most of them complete a plant in around three years on average, while foreigners need five to six years.” 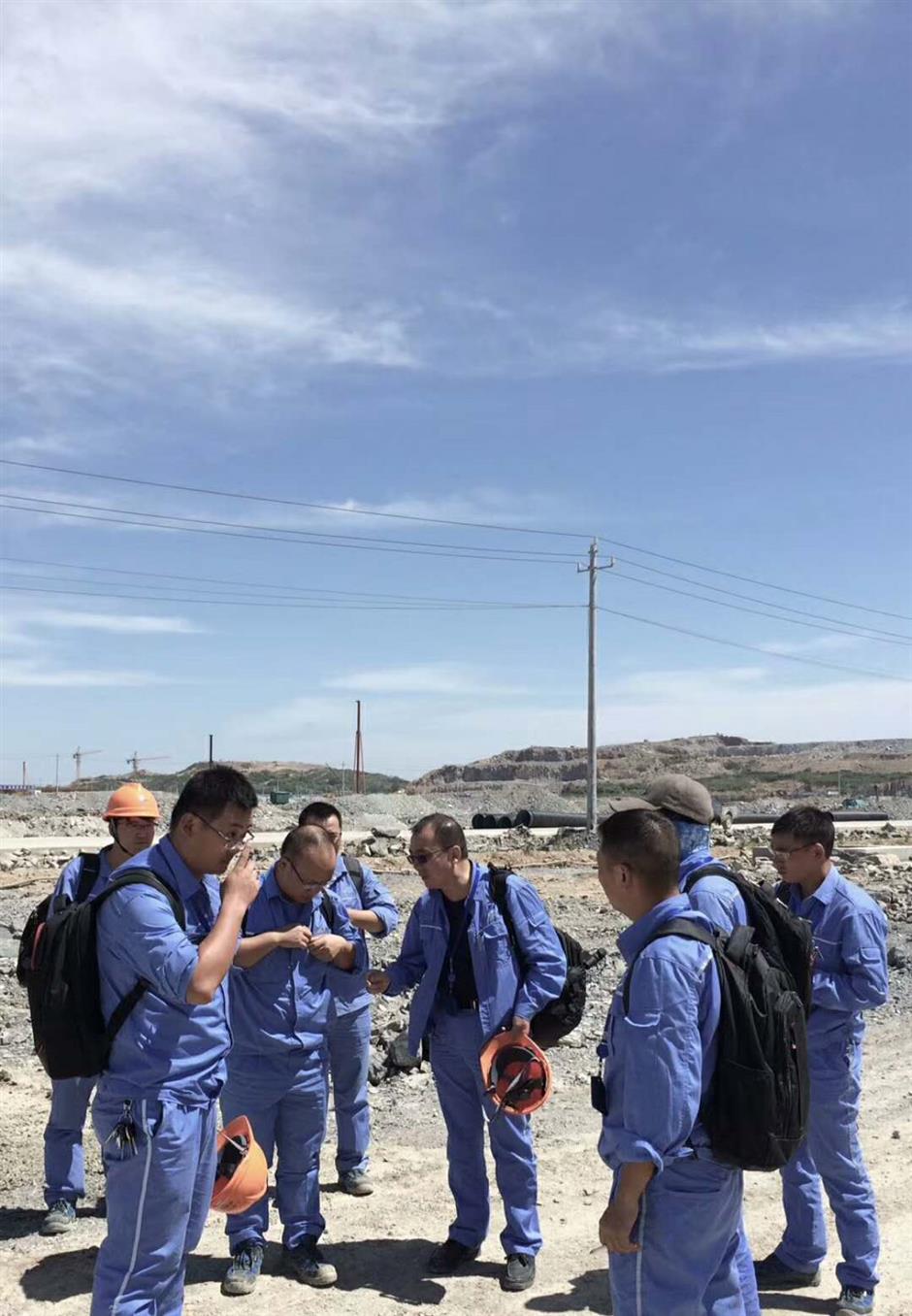 Workers conduct a site survey for a new facility at Zhejiang Petroleum and Chemical.

In Shandong, oil refining companies which were once looked down on by global players as “teapots” for their small scale and poor quality, now supply almost 70 percent of the nation’s local oil refining capacity.

“Many of them have been continuously upgrading equipment under the government’s tightened supervision,” Su said. “Some of them now have more advanced equipment and technology than giants such as CNPC and Sinopec.”

Private companies have obvious advantages, such as higher efficiency. They are quicker to adopt new technology and they have less red tape to slow them down than their state-owned competitors.

An example: while it took CNPC four years to complete a 10-million ton refinery several years ago, Zhejiang Petroleum and Chemical plans to finish half its 40-million ton project in two years, Li said.

Private companies also know better how to value and retain talent: Li’s salary at Zhejiang Petroleum and Chemical is enough for him to buy a local apartment with a bank loan, even without factoring in bonuses and rewards.

And the company offers talented chemical waste treatment specialists the chance to break into more promising industries related to the “green economy,” such as chemical recycling.

In contrast, over his whole 14 years at CNPC, he was paid 4,200 yuan (US$640) per month, “regardless of how much experience you are gaining and how much more you are contributing to the company,” he said.

Although the state-owned giant also provides hospitals and schools for their employees to ensure a good lifestyle, “the real income we get is too low compared with our rising expertise,” he said. “I would have stayed as a common worker until I died at CNPC.”

Su agrees. Su joined Shandong Bin Yang in 2006, when the company had just transformed into a joint-equity company by peeling off most of its state-owned asset.

In 10 years there, Su witnessed the rounds of upgrading of equipment and the weeding out of inefficient employees. In the future, the company built on resin will move beyond commodities and adopt new technologies to produce advances materials.

“That’s a speed we couldn’t have reached when we were still a state-owned company,” Su said.

For now, China’s state-owned giants along with private petrochemical companies are all enjoying strong profit growth thanks to the surging prices of petrochemicals while supply remains tight.

CNPC’s first half profit surged 2,300 percent from a year earlier, while Sinopec gained 40.74 percent — both companies bolstered by their refining and petrochemicals sectors. CNPC reversed last year’s losses by reducing oil and gas exploration and enhancing its refining and sales business.

“But that was the eve of the impending revolution,” said Blueocean Capital, a domestic investment consultancy.

“Many of the private projects are still under construction and they take years to complete,” said one analyst who asked not to be named.

“Once the funds they invested turn into real production, the state-owned companies might have to change radically to address the fierce competition they face now.”