In retailing, size matters. And despite all the hoopla about the online retailing craze, brick-and-mortar businesses in China still overshadow their cyber rivals in overall sales.
With growth in online consumers slowing, Internet giants are venturing deeper into offline retailing.
”Investment by Internet giants in the offline retail sector will continue this year,” Shi Jialong, head of Internet research at Nomura Securities in China, predicted. “Online companies are eager to bring in new business.”
But does all this so-called “synergy” really work?
"Brick-and-mortar stores have limited means to gather information about shoppers and their preferences, so leveraging the data capability of Internet companies might be a good idea in the online-offline tie-up,î he added.
But the theory has yet to prove itself very successful in the real world of retail.
In 2014, Wanda Group, China's largest commercial property company, the world's largest cinema chain operator and an operator of luxury hotels, department stores and tourism projects, formed a venture with leading Internet companies Tencent and Baidu to pursue online and offline synergies. But to date, the tripartite partnership hasn't delivered fruitful results.
Wanda's e-commerce affiliate Feifan has made few inroads in the retail market, and Tencent and Baidu, which each hold a 15 stake, have been reluctant to pour more resources into the venture.
Wanda, however, seems undaunted. Last month, a group of investors led by Tencent agreed to pay 34 billion yuan (US$5.4 billion) for a 14 percent stake in Wanda Commercial Properties Co. The investment group included online retailer JD.com, Sunac and Suning Holdings.
The deal was dubbed “strategic”, but doubts have been raised about its ultimate goals. Analysts said it may help Wanda Commercial, which has been experiencing cash flow problems and delays in securing a listing on the Shanghai Stock Exchange after it delisted from the Hong Kong bourse in 2016. 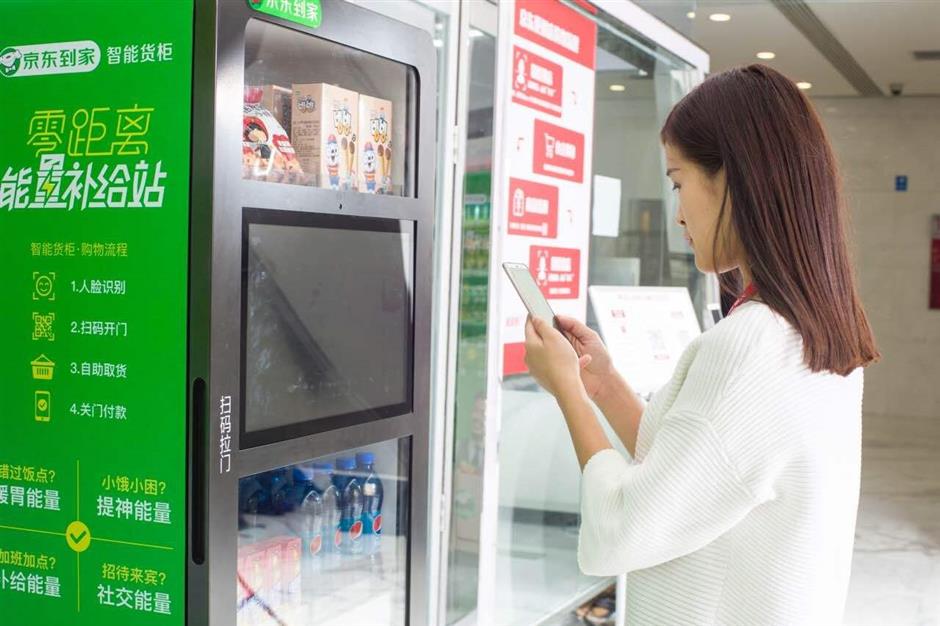 JD Daojia is tapping offline retailing with its unmanned vending  machines, which have been installed in office buildings in 10 cities and is eyeing further expansion.

For Tencent, the benefits may be less obvious. Analysts noted that China"s Internet giants, in their zeal to become commercial titans, are putting their fingers in an increasing number of pies.
Alibaba Group has already entered the realm of grocery and departments stores, using its technology to reshape retailing. Tencent isn't far behind.
It and Yonghui Superstores Co, in which it holds a stake, plan to take a minority stake in French retailer Carrefour's China unit. And it isn't surprising that Tencent wants to parlay its technologies like digital payments into smart retailing methods.
Alibaba's Alipay and Tencent's WeChat Pay altogether accounted for 93 percent of China's mobile payment segment by the end of last September, according Internet consultancy Analysys.
Details of the Tencent-Carrefour linkup haven't been revealed.
Carrefour, which has 200 physical outlets in China, has been suffering from an erosion of customers to online shopping. Yonghui has about 600 brick-and-mortar stores.
"The potential investment will leverage Carrefour's global retail knowledge with Tencent's technological excellence and Yonghui's operational know-how, in particular its expertise in fresh foods,î said a statement from Tencent and Yonghui.
Nomura's Shi said it could take a while for collaboration between online and offline retailers to show results. Internet players usually hold minority stakes in retailers, he noted, which makes it harder for them to drive transformation toward digital business models.
Tencent's social platform WeChat, which launched a “pop-up store” in the MixC shopping mall in Minhang District, has teamed up with EasyGo, a Guangzhou-based convenience store operator.
The “pop-up store” is a trial to test the waters following Alibaba's ambitious expansion into offline retailing in recent months. The cashier-less store, called We Life, admits consumers who scan a barcode with a WeChat app and register their mobile phones with EasyGo. Merchandise inside is embedded with radio frequency identification chips to record purchases.
The store has not been an instant success.
"Why would I bother go to this self-service store when I can purchase my daily necessities easy enough from other convenience stores?î said Shanghai office worker Tammy Jiang, who visited the ‘pop-up’ store near her home once. "It's too much trouble to check what kind of products are actually available in the store and what if some of the products are out of stock?”
For many consumers, the joy of shopping is more about browsing in pleasant surroundings than having to deal with tech gadgetry and digital payment systems.
A senior executive with Publicis Groupe told Shanghai Daily that self-service supermarkets and even cinemas will eventually become omnipresent as more consumers adjust to undisturbed service with maximum privacy.
While Internet companies are expanding to the offline realm, she noted, the customer experience, whether it be a social atmosphere or human-based customer service, is what matters most in the game of marketing. 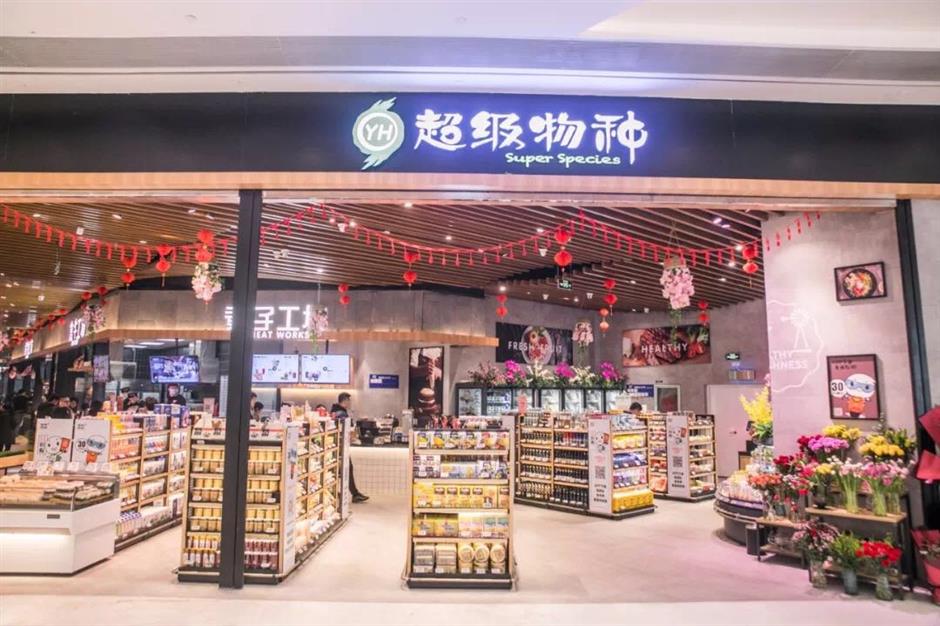 Super Species, a Yonghui Supermarket subsidiary that focuses on fresh seafood and fruit, aims to add 100 stores to the 34 outlets it already operates nationwide.

Another Internet giant, JD.com, is seeking to innovate in offline retailing with its JD Daojia Go unmanned "smart vending machines”, which have been installed in office buildings in 10 mainland cities and is eyeing further expansion in the coming year.
JD Daojia said its logistics network and its merchandising reach offer advantages to help the company to stay closer to the tastes of shoppers.
That is one big difference between online and offline sellers. Brick-and-mortar stores generally have little idea of the profiles of their shoppers, while Internet companies are experts at tracking customers and their preferences.
Offline retailers are now trying to leverage the one advantage they do have: a shopping experience that can't be replicated online. To that end, they are trying to upgrade stores to make them more special, diversified places.
Super Species, a Yonghui Supermarket subsidiary that focuses on fresh seafood and fruit, aims to add 100 stores to the 34 outlets it already operates nationwide. At least a dozen new openings are expected in Shanghai this year.
Its strategy of combining a fresh food market with dining areas has been successful. The stores are linked with Tencent's payment system to allow easier tracking of merchandise and shopper preferences.
Suning Commerce Group is also trying to diversify its brick-and-mortar stores with the addition of 300 physical outlets in Shanghai this year. They will include specialty shops, such as baby and maternity products, sports and fresh food outlets.