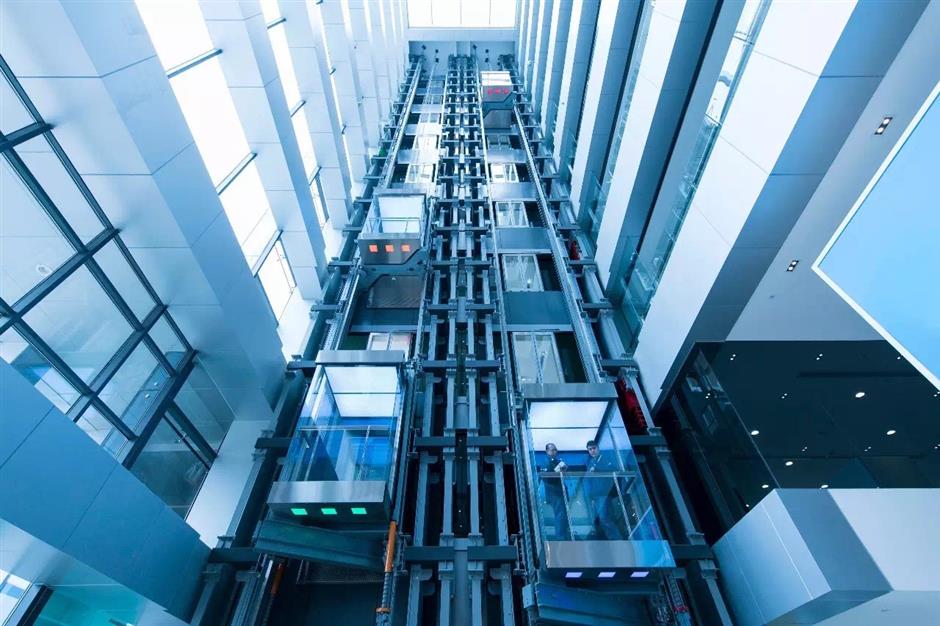 A photo of German elevator maker thyssenkrupp's TWIN elevators – in which two cabs travel independently to save time and energy use. Global elevator companies have been rushing into China since it opened to the world 40 years ago, making it the most competitive market.

When engineering graduate Chen Liang joined an elevator company nearly 30 years ago, “an elevator was worth almost two apartments in Xujiahui.”

Today, people have to pay nearly 10 million yuan (US$64 million) for an apartment there while “an elevator sells only around 150,000 yuan,” he said.

That’s not because the elevator market has retreated in China, which accounts for around 60 percent of the world’s elevator demand, along with a great export market.

“With global elevator sellers rushing into this country, China has become the most competitive market,” Chen said, who now works for German industrial group thyssenkrupp.

Worldwide, elevator demand is growing between 5 and 7 percent annually. But in China, sales of elevators surged around 20 percent a year on average between 2002 and 2015, driving all the global giants such as Otis, Schindler, thyssenkrupp, Kone, Mitsubishi and Toshiba to the country, according to a report by chyxx.com, a domestic industrial consultancy.

Elevator prices in western countries can be “several-fold higher than those in China,” Chen said. “Partly because they have to pay higher logistics costs as most of the world’s elevators nowadays are produced in China and the competition in these countries is not so furious as in China.”

Over the past 40 years, China has become the world’s largest elevator producer and consumer, after having only eight state-owned producers supplying the domestic market in 1978.

While the world needs around 900,000 units of elevators every year, “nowadays China can almost meet the whole demand,” said Anson Yang, marketing director for elevator business in China at thyssenkrupp.

China produces at least 500,000 units of new elevators every year, said Li Shoulin, president of the China Elevator Association, at a conference. “But they have inventories to sell, which altogether make the country alone able to supply the whole world.”

Elevators, says Chen, has shifted from luxury goods into common goods on the back of the China market’s rise.

“That to some extent resembles the progress of the car market,” he said. “Bolstered by rapid growth in both demand and production over the past decades, China has helped the world enjoy lower prices of elevators by several rounds of upgrading in technology and management models.”

In 1978, only around 17.9 percent of China’s citizens lived in cities. By the end of last year, however, that had risen to over 58 percent, according to the National Bureau of Statistics.

Bolstering the fact that the elevator market in China grew around 20 percent annually between 2002 and 2015 was that investment in China’s real estate industry soared over 20 percent between 2001 and 2012, according to a report by Beijing-based Zhiyan Consulting group.

Chen’s employer, thyssenkrupp, opened a plant in Shanghai's Songjiang District  in 1999. “At that time we set our capacity as 500 units of elevators per year, as we thought that would be enough to supply the Chinese market for years,” he said.

Now the production site has grown into the company’s headquarters for the Chinese market, with total capacity being "several-folds higher from the origin."

Meanwhile the company has sped up production and is able to complete an order in two weeks compared to the average of three months at the beginning.

“We have to adapt to the Chinese market, which asks the fastest delivery time while a lot of changes could happen in the customers’ request,” Chen said.

“Yet you have no choice, because all the global competitors are here, fighting for customers and profit by upgrading technologies and speeding up production.”

Although starting late, China has upgraded technologies to world standards by working with the global leaders, Chen said.

“When a foreign company starts a plant in China, it normally will equip the plant with state-of-the-art technologies,” he said.

“That not only benefits the company itself, but pushes local producers to upgrade technologies.”

By the end of 2015, China had around 700 elevator makers, alongside 200 component makers and 10,000 maintenance companies, according to the China Elevator Association.

Although the domestic companies are still trailing the global giants in technology development and only account for around 30 percent of market share in China, they have pushed the market to be more competitive, bringing down costs and making elevators cheaper, a report by Zhiyan said.

China’s elevator sales growth dipped in 2015 when investment in real estate dropped, triggering fears that the heyday of China’s elevator market was over ended, Bloomberg once reported by quoting Otis's chief executive officer.

But looking ahead, “we also see the upgrading in Chinese consumer’s preference, which will further bolster the market's growth,” said Patrick Xu, previously Nomura's industrial analyst.

“Consumers are becoming pickier, such as asking for more personal space,” he said. “So nowadays a building may install more than one elevator, which helps separate several companies on different floors — thus the number of elevators we buy may not necessarily follow the growth of real estate.”

Meanwhile as elevators become “old” after around 10 years’ service, the number of elevators to be replaced or repaired will double the number in 2014, Zhiyan’s report said.

“That will become another aspect of the fast growing market in China in the coming future, extending from merely installation growth,” it said.