Explore the new technologies from Japan

During the event, they have attracted interest and scored business contract. Olympus, for example, said it expects to generate “several hundred million yuan” in sales of medical equipment through the expo booth.

The expo is being held on the ocassion of the 40th anniversary of China’s launch of opening-up and reform, signaling the nation’s embrace of global trade.

“Once a door is opened, it will never shut again,” said Takahashi Hiroshi, Sony China’s president.

Japanese electronics firms have been investing heavily in China for a long time and tying up with Chinese partners.

We take you on a short tour of some of the Japanese exhibits. 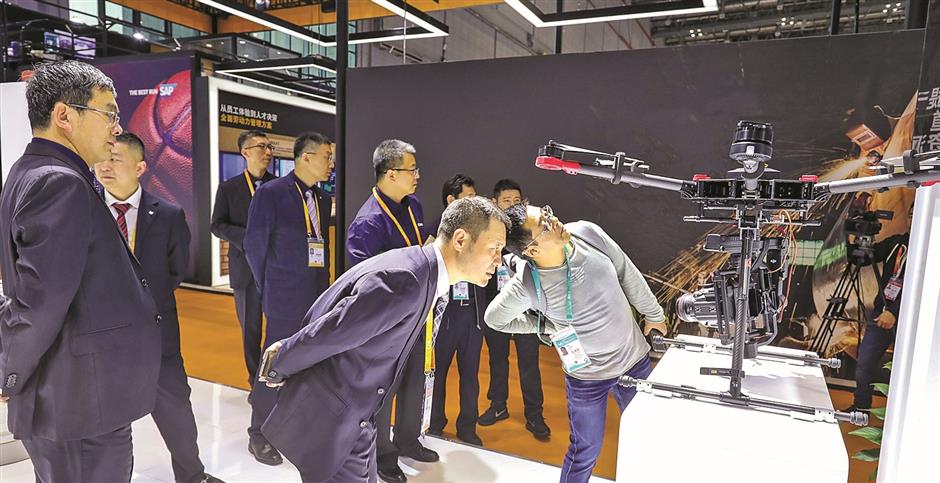 Canon has multi-field digitalized image products and solutions on display, targeting the opportunities of increasing and diversified Chinese consumption and the desire of people for a happier life.

As the world’s biggest camera maker, Canon is expanding its imaging-technology businesses to include commercial printing, network cameras, medical and industrial equipment. By 2020, revenues from new businesses are expected to account for 30 percent of sales, and the group’s annual revenue is forecast to increase by about 20 percent to 5 trillion yen (US$44.17 billion).

The new products are displayed at the expo alongside cameras.

Canon’s digital cameras and inkjet printers are already the top sellers in the domestic market. The company also plans development in new areas to tap into robotics, Internet of Things and artificial intelligence. 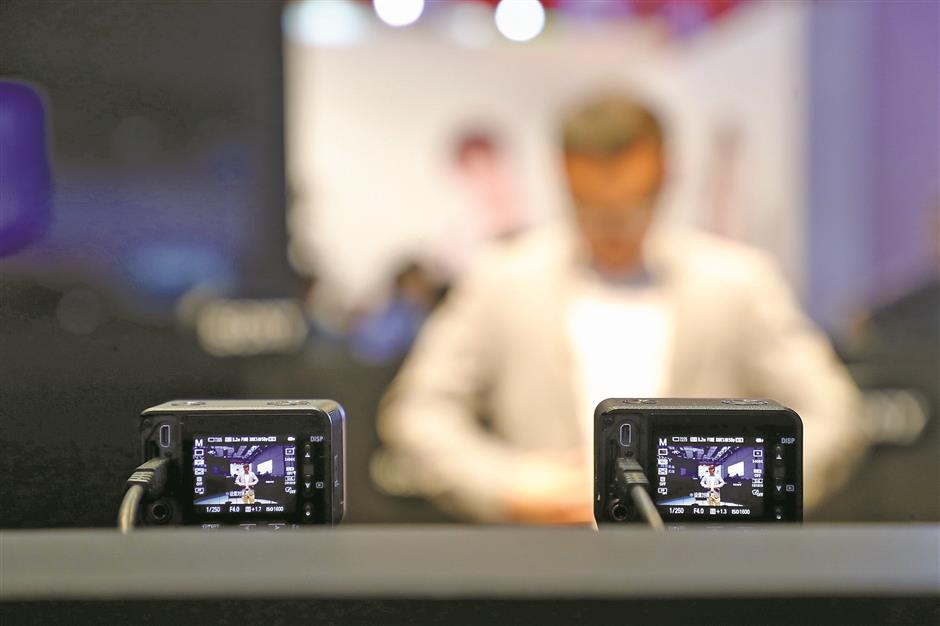 Sony’s full-frame model A9, A7 series and RX series cameras are on display for professional and amateur photographers. Other products on exhibit are the Sony A9F and Z9F TV, featuring leading image and sound quality and design. Sony premium quality audio products feature wireless, cancel noise and are waterproof.

The company is also the leading producer of broadcasting industry gear and imaging devices. It now provides image sensors to top mobile phone makers, including four in China. It’s also aiming to expand into areas such as autonomous driving, Internet of Things and artificial intelligence.

In the past decade, fast-growing Internet giants like Baidu, Alibaba, Tencent and JD.com have greatly changed the business environment and people’s everyday lives.

Sony said it needs to take advantage of such platforms deployed by data-based companies and participate in the ecosystems they create with differentiated offerings.

As a century-old optical company, Olympus says it adheres to its mission of “achieving the health, peace of mind and happiness of people.”

It has been a quick responder to China’s national policies with continuous innovation and integration. At the import expo, it is showcasing cutting-edge products in the fields of medical, imaging and science.

One of the Olympus products on display is dust-proof, drop-proof and anti-fogging. At the same time, it can resist pressure of up to 100 kilogram-force and temperatures as low as minus 10 degrees Celsius. 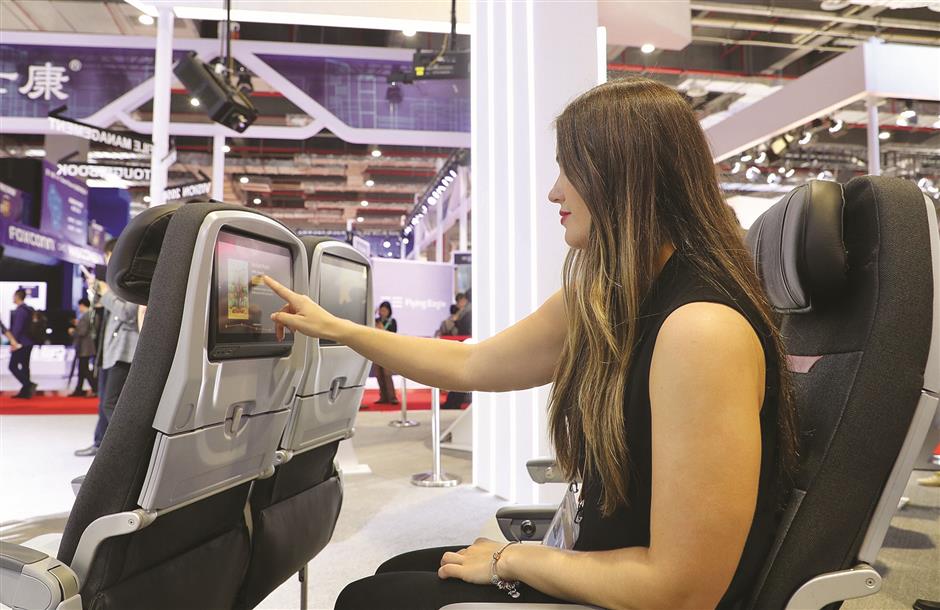 The spotlight of Panasonic’s booth is the inflight cabin entertainment system.

Panasonic’s booth at the expo displays the latest technologies and products, from city lighting and smart factories to connected home, car and avionics. The company’s theme at the event is “Better Life, Better World.”

The spotlight of the booth is Panasonic’s inflight cabin entertainment system. It features high-definition picture quality, incredible picture angle and a high-sensitivity touch screen as a “visual home theater” in an airline cabin.

The import expo is a “good stage” for the company to improve brand awareness and secure new contracts, the company said, pointing to a contract it has signed from Shandong Province more than 2,000 heaters. 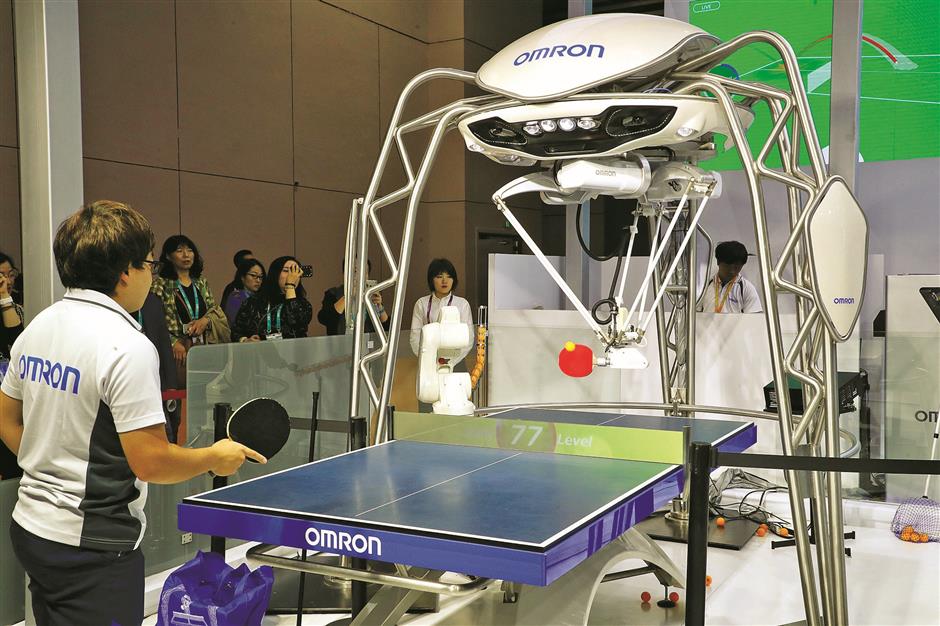 At the expo, Omron is displaying its fourth-generation Forpheus robot, which can play ping-pong or even train human players. It is now possible for the robot’s artificial intelligence to predict from opponents’ movements the type of shot they will play. The ability to predict when a smash is coming allows a more realistic playing experience, especially during rallies, the company said.

Omron said it wants to support China’s digital transformation and upgrading of the manufacturing sector.