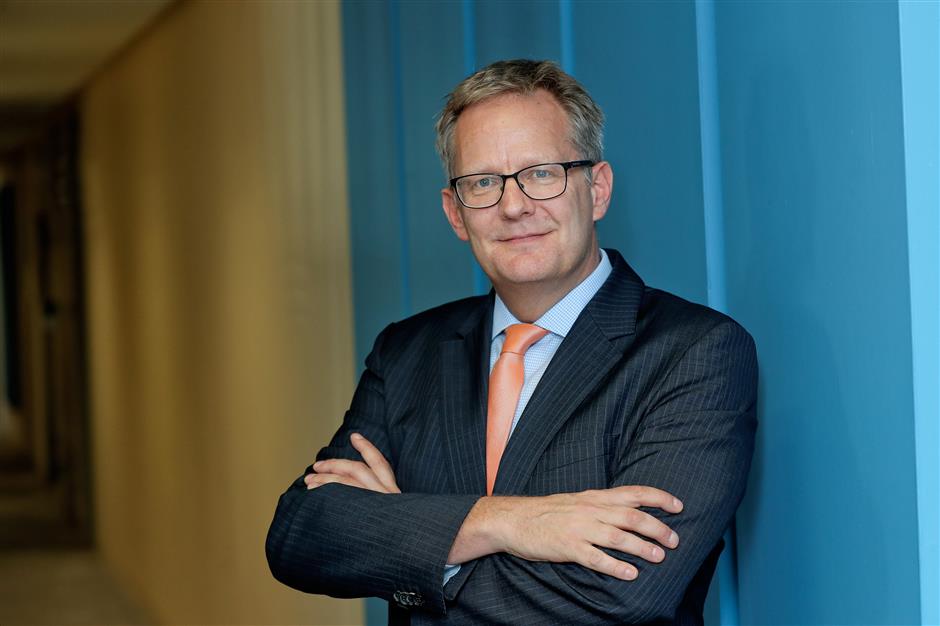 Andrew Vogelaar, the recently appointed global head of growth markets at IDA Ireland, is impressed at how fast Chinese companies are moving toward the highest level of technological development.

During his travels in China on behalf of the state-sponsored agency for inward foreign direct investment, he said he had made exciting discoveries that had increased his interest and confidence in the country. The recently concluded China International Import Expo further reinforced his belief.

During an interview with Shanghai Daily, Vogelaar shared his views about the opportunities and challenges presented to investors interested in Ireland, a nation strong in technology, and with unparalleled agriculture and natural resource sectors.

Q: Shanghai has just hosted the first China International Import Expo. What have you taken from the event?

A: Heather Humphreys, our Minister for Business, Enterprise and Innovation, attended the China International Import Expo. She was very impressed by this big event. It showed how open China is. For Irish companies, they were also very excited about winning many contracts from this market during the CIIE.

I think the main thing about CIIE was to show how much potential China has. Irish companies traditionally exported to other European countries and to the US. However, now we have started to export more to China, including infant baby formula, medical devices, pharmaceutical products and many other kinds of products. All of them are very strong businesses for Irish companies in China.

Q: What are the opportunities you saw during your trip to China?

Since Ireland is a small country with fewer than five million people, we try to concentrate on a few areas rather than develop everything. The environment and sites are very natural in Ireland, so we are very good in the food industry, especially in the baby formula section, and ingredients sector.

In the meantime, we are an export-oriented country since we export goods and services which take over 80 percent of what we produce. Sino-Ireland’s two-way trade is estimated to have reached 15 billion euros (US$17 billion) in 2017.

So, it’s very exciting to see that China is opening up, and it is also important for Irish companies to see it. Our government tries to help these Irish companies, not only to sell products, but to establish, operate and grow in China, being partners with Chinese companies.

Q: Could you give examples?

A: Yes, I can give you examples of some projects which are going on the other way around. In the past year or two, there has been significant investment from Chinese companies into Ireland. For example, WuXi Biologics decided to invest 325 million euros in Ireland to set up a research and manufacturing operation, which is the largest greenfield investment by a Chinese life sciences company into Europe ever. It was fantastic to see that they chose Ireland.

So, trade between China and Ireland is growing strong. Last year was a record year, and I believe this year will be stronger. This is a “both win” situation.

Q: Talking about “both win,” what about Irish investment in China?

A: Irish companies traditionally have been the food companies. We have very strong Irish food brands, such as Kerry and Glanbia. The infant formula sector has been growing extremely strong. Depending on statistics, 13 or 14 percent of Ireland’s infant formula production is exported from Ireland to China.

Irish products in China are always seen as quality and safe products with a good reputation, not only for food, but also for some pharmaceutical products, and that’s why WuXi Biologics came to Ireland.

Also, because we have been doing those businesses for a long time, we have a rich history in areas like food, agriculture, pharmaceuticals and technology. In this case, I believe it will be natural for those advanced Irish companies which are doing export business with China to invest in China.

At the same time, along with the partnerships between Ireland and China that have been built up, we will see more China companies invest in Ireland as well. It is a two-way development.

Q: How else can Ireland facilitate investment and trade?

A: Ireland is also strong in the financial sector to support cross-border deals. In general, the international financial services sector in Ireland can be divided into five broad business areas — banking and payments, insurance and reinsurance, funds and asset management, aircraft leasing and financial technology.

The growth and development of international financial services has been one of the highlights of Ireland’s economic development over 40 years. Because of Brexit, more banks and financial companies are coming to Ireland to continue servicing EU customers. Now, the sector employs approximately 40,000 people and there are more than 400 significant institutions operating in the country. It is worth mentioning that Bank of China set up its Dublin branch as part of its European expansion strategy in June of 2017. Other organizations like Citigroup, JP Morgan, Fidelity also invested in Ireland, and keep expanding its EU business here.

Additionally, we have a very strong financial technology sector comprising both multinational and Irish indigenous companies. We are especially strong in cyber security, payments, risk modeling, data and analytics and blockchain technology. Companies such as MasterCard, PayPal, Citi, First Data, Deloitte and AON have established research hubs in Ireland.

Q: How about the transport sector in Ireland?

A: Ireland is located between North America and Europe which gives us an advantage in terms of serving both markets. We are very well connected with the US, the UK and continental Europe by air and sea. It is very convenient for people and products to move from Ireland to the rest of the world. Especially, flight connections between London and Dublin are among the busiest in the world. That is why many international companies who want to do business with the UK or in the UK choose to set up their offices in Dublin, because we have a good business environment, government support, also a very easy and fast way to get to the UK.

I use medical devices companies and pharmaceutical companies as an example. There are many big Pharma and MedTech companies in Ireland. Sometimes the drugs or products are needed to be delivered in an emergency, even within 24 hours. Since we want to do our best in pharmaceuticals and other advanced industries, we have to think about how to promote our transport system at home and abroad. Though many years’ experience and development, the Irish transport system is very developed nowadays. In Europe, we can deliver products within a day, that’s typically by air freight. We also have very good transport links abroad.

Q: Does it mean it will take a much longer time for products to reach China?

A: Not really, for example, Ireland has many large multinational companies, such as Johnson & Johnson, who manufacture a wide range of products in Ireland to serve the global market, including China. When Johnson & Johnson assessed to set up their contact lens plant in Europe, they looked at a lot of locations but finally chose Ireland. It was because they figured out that they can get their products quicker from Ireland than from the most parts of England and Europe. Additionally, we have direct flight connections with China now through Hong Kong and Beijing. It makes business between China and Ireland easier and faster. Transport costs are also lower in this case.

For the past four or five years, Ireland has been the strongest economy in Europe. The growth is between 6 and 8 percent. By Chinese standards, that’s not huge, but for major developed economies, that’s quite big.

Ireland is delighted to work with China and welcome Chinese investment.