Technology in farming is no pig in a poke 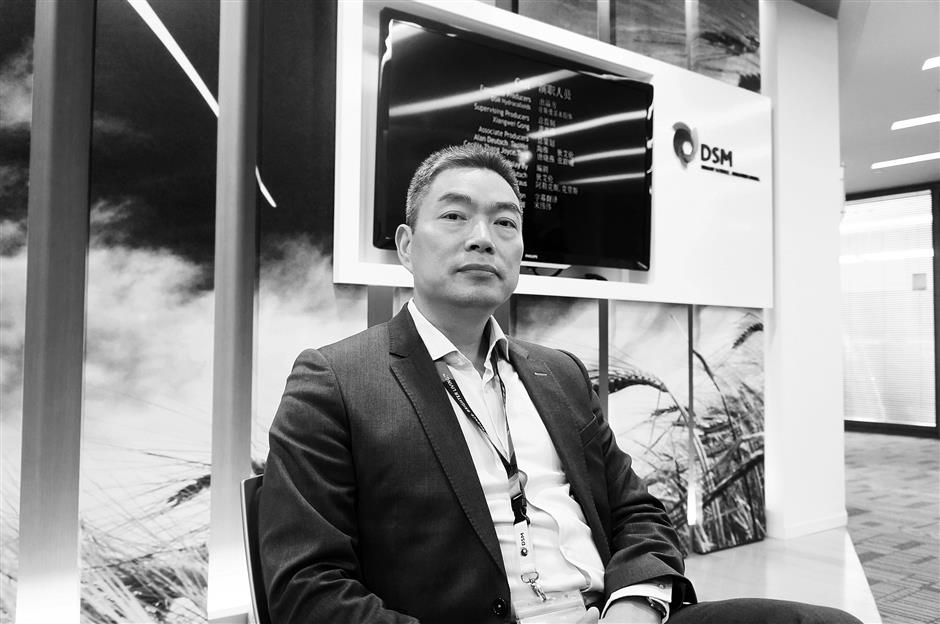 But the reality is more down to earth. Prices of China’s staple meat have continued to slide this year, augmenting a steady decline.

At the same time, measures announced by China’s environmental authorities have added to the woes of pig farmers.

Compounding their miseries, an outbreak of African swine fever began in August, with sporadic cases of infection since being reported in provinces that include Liaoning and Henan.

Dutch nutrition and materials company DSM is a leading global supplier of ingredients and additives used in animal feeds, with the stated goal of raising healthier animals for better meat and eggs.

Commenting on recent official actions on environmental protection, Wang said he sees a potential boost to his company’s bottom line.

“Any form of pollutants is a misplaced resource,” he said.

In the case of pigs, the main pollutants are hog feces and pungent ammonia. One solution is improvement in intestinal bacterial flora to help pigs better digest their food.

DSM researchers developed several additives that contain enzymes conducive to digestion, but the company drew a cold shoulder from pig farmers at first because the enriched feed was expensive relative to feed from local competitors and the concept of animal gastrointestinal health was almost unheard of at the time.

“Farm owners didn’t understand what it was for,” said Wang of the enriched feed.

But attitudes have changed, in no small part due to a Chinese government crackdown on livestock industry pollution.

Although poultry, ruminants and pigs are all targeted in the environmental campaign, pigs bear the brunt of the onslaught. Officials have issued detailed guidelines designating localities close to the sea, to potable water sources and to big cities as “unsuitable for pig-raising.”

As a result, pig farms that fail to meet environmental standards have been forcibly shut down and a green tax was levied on “polluting” farms.

Of all the provinces, Zhejiang ranked at the top, with 70,000 pig farms closed in 2017, more than triple the number of farms in neighboring Jiangxi Province.

And under the new environmental tax code, effective in January, farms with a swine herd of 500 or more will be subject to an unspecified amount of tax unless they buy necessary equipment to clean up animal waste.

It’s another blow for pig farmers struggling to cope with the notoriously capricious “pig cycle” that buffets prices as it swings from supply shortage to glut.

Wang predicts that small-scale farms with increasingly lean profit margins will be eventually knocked out of business.

“The industry will become ‘leaner’ in the sense that centralized industrial farming will come to dominate the scene,” he added.

Wang said he sees the landscape of pig farming changing across China.

In the future, he predicts, the majority of pig farms will be relocated in the nation’s north and west — away from populous eastern coastal regions where most of the consumers are.

Wang said it’s “wasteful” to grow the ingredients of animal feeds — corn, for example — in northeastern China and then transport them over long distances to farms. A more economical way would be — and it is slowly happening now — to raise pigs close to where their food is.

“When it comes to pollution from livestock, the central issue is pigs,” said Wang.

He noted that poultry, cattle and sheep pose a much smaller problem in China, compared with countries like Australia, where methane from cow flatulence is blamed for fanning global warming.

He said he expects mega pig farms to become the norm in a few years, but China’s huge land mass, complex topography and regional variations will always leave room for many smaller farms. “Let’s face it, the latter will not disappear completely,” he told Shanghai Daily.

A fixture at industrial symposiums on livestock, Wang often argues that China can’t yet be called a global “power” in pig raising, even though it boasts the world’s largest swine population.

Its 700 million pigs are almost half the world’s total.

However, concerns about animal health and nutrition have long been left out of the “cost-benefit equation.”

“If we can combine sustainable development with pig farming, it would be the new formula for business success,” Wang noted.

He said he wants to see China raise the productivity of its husbandry industry. In his view, “we consume too much resource but reap only a relatively small output.”

One example of enhancing productivity through new breeding concepts and technologies is a DSM product called Hy-D, a variation of standard Vitamin D3. Wang said intakes of Hy-D could boost the number of pigs weaned per sow per year.

Simply put, the more piglets a female pig breeds throughout her life cycle, the more economic value farms can extract from their upfront investments.

Besides, the use of DSM enzymes in feeds is said to drive up the rate of conversion of nutrition in feed into animal protein.

The market prospect for these products is looking good, given how customers have grown more discerning and pickier about the food they eat.

“Over the past two years, we’ve seen a spike in sales,” Wang said of DSM’s animal nutrition and health business in China, without disclosing the exact percentage of growth.

As the Chinese market gradually transitions toward a more quality-oriented growth model, it will be vital for businesses like DSM to show that their pricier products and solutions are worth paying for.

“In the end, it will be down to customers to decide if they share the values we endorse,” Wang noted.

Apart from suffering from low productivity, China’s husbandry industry is also grappling with an influx of new market players.

Some animal feed producers, dismayed at dwindling profit margins, have moved down the value chain to raise pigs themselves, motivated by a market boom years ago and by the conviction that it was “an easy switch.”

“By turning a market for feed into a market for pork, they believed they could absorb excess capacity,” said Wang.

For example, pigs raised on farms owned by Sichuan-based New Hope Group numbered 2.5 million last year — a figure that its star billionaire owners, the Liu brothers, have vowed to lift to 70 million. No time frame was given, though.

“If that increase is true, it means an extra 40 percent capacity,” Wang observed. “And it surely will jolt the industry even more.”

He foresees a downward spiral of pork prices until farmers cull herds to lift prices and move the move the “pig cycle” a turn.

Wang also warns of the danger of pig farms that are too large. A farm breeding 10,000 pigs stands to lose more during a swine flu outbreak than one with a herd of 1,000.

In China, technology is never far from any industry, and livestock is no exception.

Following in the footsteps of Netease and Alibaba, JD.com, another e-commerce heavyweight, recently announced plans to raise pigs using technology like facial and voice recognition.

According to company statements, voice recognition will help identify when a pig contracts a cold.

Wang acknowledged the role of technology in enhancing the efficiency of pig farming, but he said tech companies need to be sufficiently versed in the business of raising pigs if they hope to succeed.

As he sees it, data collection is a strength in the toolkit of big tech but deciding what data are pertinent and how to compute meaningful algorithms to process the data are not.

Companies like DSM, with a long history in animal health management, have a role to play as they comb through animal health indicators to decide the time and strategy for intervention. DSM itself is designing a cloud-like platform, where pig farmers can upload data for company experts to analyze their problems and generate solutions. “This is our new frontier to explore,” he said.