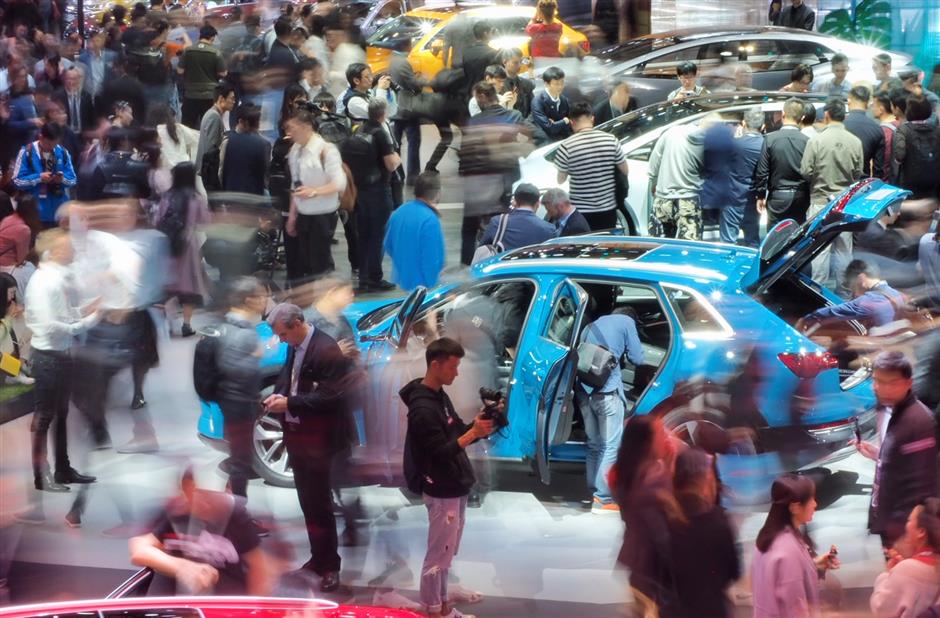 Luxury carmakers were upbeat about the Chinese market and were also embracing new industry trends as they showcased their latest technologies and car models at the Shanghai International Automobile Industry Exhibition.

The fair will open to professional visitors on Thursday and the general public can go for the fair this weekend.

Its first all-electric production car model, Lagonda Rapide E, made its worldwide debut on Tuesday at the Shanghai auto show.

“The two biggest growth factors in our industry in the coming decade will be SUVs and electrification,” Reichman said.

The limited model is expected go into production in 2022 in Wales.

Chief Executive Officer of Rolls-Royce Torsten Müller-Ötvös expected China to become the company's biggest market in the "not too distant" future.

“China plays a significant role in our global success and is also our youngest market currently; and it’s set on continuous growth pace,” he explained.

The company showcased its flagship Phantom model and other tailor-made offerings.

Lincoln, the luxury automotive brand of Ford Motor Company, will accelerate the introduction of its products according to the needs of Chinese customers and incorporate more Chinese elements into its products.

Between 2019 and 2021, Lincoln plans to launch seven new models in China while introducing at least two limited edition models each year, according to Mao Jingbo, president of Lincoln China.

"Lincoln aims to fully develop its 'China's first, Customer first' strategy and complete the upgrading of its products, customer experience and brand in 2019," Mao said at the China debut of Lincoln Aviator, the first model in Lincoln line-up to offer plug-in hybrid option.

"Fully considering the needs of Chinese customers, Lincoln will achieve 'China speed' in the highly competitive luxury car segment to brace for a breakthrough," Mao said.

In addition to the Lincoln Aviator, a seven-passenger SUV based on an all-new rear-wheel-drive-platform, the company also showcased a teaser for the Corsair, Lincoln's first locally produced model in China. Production of the Corsair will start before the end of this year, according to Chen Anning, president and CEO of Ford China.

It is a “delight” to see Lamborghini gain popularity worldwide, especially in the Chinese market, said Stefano Domenicali, Chairman and Chief Executive Officer of Automobili Lamborghini.

The brand made the Asia debut of its next generation V10 super sports car Huracán EVO and Huracán EVO Spyder at the Shanghai auto show.

Also at the show, Maserati showcased a co-branded model with Ermenegildo Zegna, representing the combination of luxury and fashion.

Meanwhile, Bentley said it is expanding its Chinese retail network by 15 percent annually to meet the booming local demand.