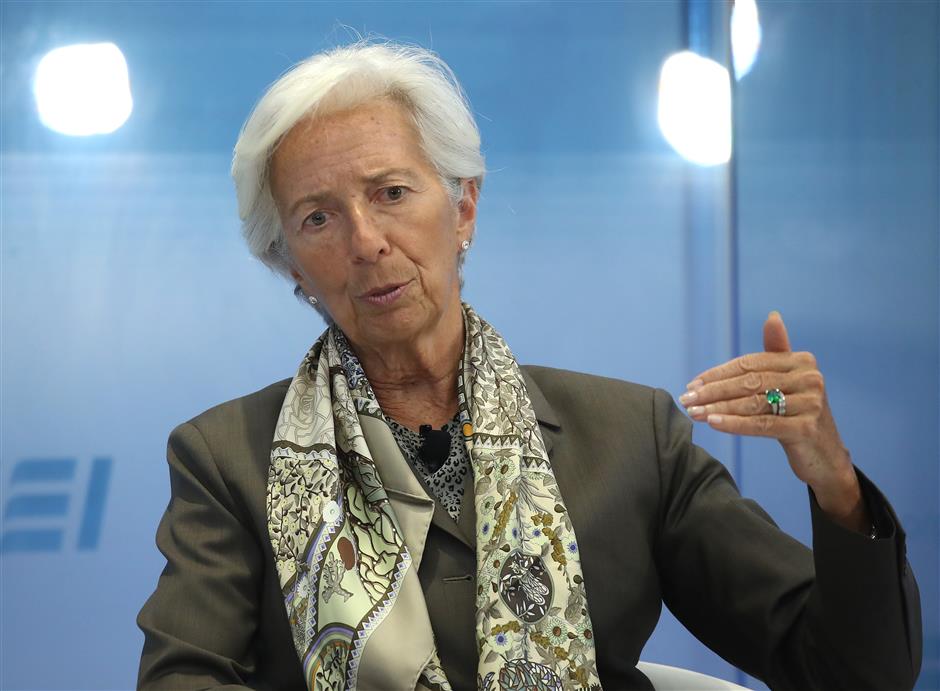 IMF Managing Director Christine Lagarde speaks about the G20 and the global economy during a discussion at the headquarters of the American Enterprise Institute for Public Policy Research (AEI) on June 5, 2019, in Washington, DC.

Managing Director of the International Monetary Fund Christine Lagarde warned in a blog post Wednesday of "growing concerns" over the impact of current trade tensions on global growth, urging the removal of existing trade barriers and restraint in erecting new ones.

In an article titled "How to Help, Not Hinder Global Growth," Lagarde highlighted the current global trade tensions, which she said "are looming larger."

"Most importantly, there are growing concerns over the impact of the current trade tensions," the IMF chief said, adding that the most recent US-China tariffs risk further reducing investment, productivity and growth.

The tariffs that the Trump administration recently threatened to impose on all Mexican imports "are also of concern," she said.

Calling the negative impacts of those trade tensions on global growth "self-inflicted wounds," Lagarde said they must be avoided "by removing the recently implemented trade barriers and by avoiding further barriers in whatever form."

The IMF estimates that the increase from 10 percent to 25 percent in additional tariffs on US$200 billion worth of Chinese goods sold to the United States, coupled with "envisaged" tariffs of 25 percent on roughly US$267 billion as of May in Chinese products, could subtract about 0.3 percent from global gross domestic product in 2020, according to Lagarde.

The tariff hikes were announced by the Trump administration in May to unilaterally escalate the frictions in the midst of trade talks between Washington and Beijing.

The US-China tariffs levied by and on each other in these two years could reduce global GDP by 0.5 percent in 2020, Lagarde said.

She added that the reduction amounts to a loss of about US$455 billion, which is "larger than the size of South Africa's economy."

In addition to trade tensions, Lagarde also raised the question of whether an uptick in global growth that the IMF projected in its April's edition of the "World Economic Outlook" will happen as expected.

The managing director mentioned several "significant stumbling blocks" impeding the acceleration in global growth, including the uncertainty in continued growth in advanced economies following the first-quarter momentum, and the possibility of failure or delay of the materialization of previously anticipated improvements in stressed economies.

Furthermore, the effect of a possible no-deal Brexit and a perceived depression in economic activity as a result of the recent increase in oil prices are also cited by Lagarde as "question marks over the expected uptick in growth."

Meanwhile, corporate debt levels as an example of underlying vulnerability of the global economy, and the disappointing mid-term growth prospects faced by many economies might also darken the growth picture, according to Lagarde.

As finance ministers and central bank governors of the Group of 20 (G20) members are gathering this week in Fukuoka, Japan, Lagarde called on policymakers to work in partnership to "help, not hinder the expected pickup in growth."

Specifically, the IMF chief suggested that the G20 mechanism resolve the current trade tensions and step up the modernization of the international trade system, so as to make it more open, more stable and more transparent.

She also called for achieving resilient and inclusive growth by calibrating balanced fiscal policies, addressing dislocations caused by trade and technological innovation, and engaging in structural reforms that, if comprehensively implemented, are expected to boost the G20 members' GDP by 4 percent in the long term.

Last but not least, cross-border policy coordination is needed if growth falters, Lagarde said. "Our downturn simulation shows that, if all countries act decisively to stimulate their own growth, the positive spillovers reinforce each other."