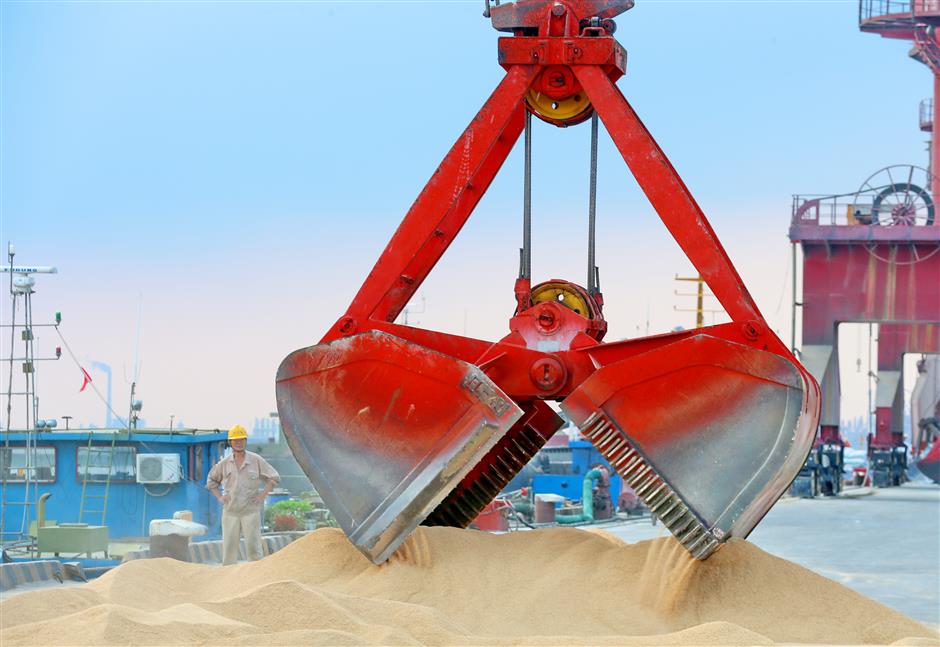 A crane vehicle loads imported soybeans onto a cargo boat at the Port of Nantong in Nantong City, east China's Jiangsu Province, on August 6, 2018.

China's supply and trade of major farm produce will not be challenged much despite the escalating trade tensions triggered by the United States, a Chinese agriculture official said.

Higher custom duties on major American farm produce will not result in inadequate supply, and key Chinese farm produce could be exported elsewhere, said Han Jun, vice minister of agriculture and rural affairs in an interview with Xinhua.

US farmers are losing Chinese market

As one of the most important export markets of US agricultural products, China imported farm produce worth US$24 billion in 2017.

From July 2018 to March 2019, US agriculture exports decreased to US$6.25 billion, about 70 percent lower year on year, due to trade frictions. Exports of major products including soybeans, grains and cotton went down 87 percent, 95.5 percent and 43.6 percent year on year, respectively.

Responding to US tariff hikes on Chinese products, China has imposed additional tariffs on American farm produce since July 2018. "Almost all US agricultural products have been imposed with additional tariffs as a countermeasure against the trade conflict started by the US," said Han.

US farmers cannot afford to lose the China market, as it would be rather difficult for them to retrieve their market share if other countries take it up, noted Han.

He also emphasized that the bilateral agricultural trade will not return to normal until the US removes all additional tariffs.

The decline of US exports does not affect China's major farm produce imports much as the country can secure supply with abundant policy tools through multiple supply channels.

The country could broaden import channels such as increasing soybean imports from Russia and South America.

Han also noted that China's demand for soybeans decreased since last year, adding that China is well placed to keep the balance between soybean demand and supply and maintain the stability of the market.

US market not the only choice for Chinese agricultural products

According to Han, China's exports of advantageous farm produce including aquatic products, fruits and vegetables declined in the fourth quarter of 2018 and the first quarter of 2019 due to US tariff hikes.

The total agricultural exports to the US decreased 8.8 percent year on year with aquatic products down 6.6 percent, fruits down 19.8 percent and vegetables down 16.4 percent, respectively. The exports may drop further since the US increased the tariff hike from 10 percent to 25 percent.

Faced with the situation, Han explained that China could turn to other markets for agricultural export. On one hand, the country could exploit the potential of traditional markets including the ASEAN, Japan and the European Union. On the other hand, it could strengthen trade cooperation with Belt and Road countries to create new substitute markets.

Meanwhile, Chinese enterprises should be encouraged to expand the domestic market to meet the needs of high-quality aquatic products, fruits and vegetables.