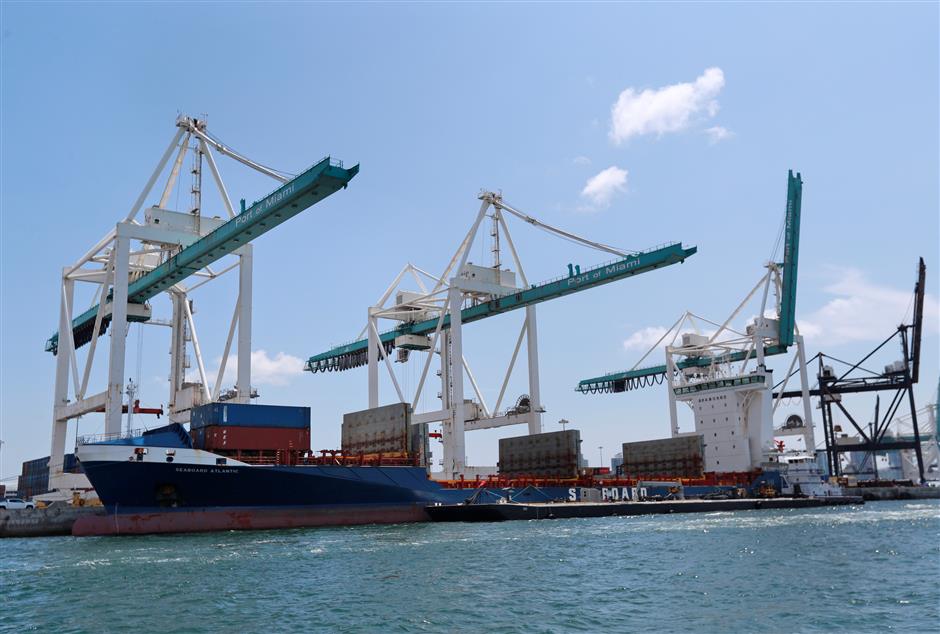 In this July 24, 2019, photo, the container ship Seaboard Atlantic is shown docked at PortMiami in Miami.

US gross domestic product grew at a 2.1-percent annual rate in the second quarter, decelerating from the 3.1 percent expansion in the previous quarter, data released Friday by the US Department of Commerce showed.

Growth in the April-June period, according to the Commerce Department, was mainly driven by consumer and government spending, while negative contributions from investment offset those gains.

Meanwhile, imports, which have been subtracted from the calculation of GDP, increased, the Commerce Department said.

However, gross private domestic investment saw a drastic decline of 5.5 percent, the worst since the fourth quarter of 2015. Current-dollar personal income, meanwhile, increased US$244.2 billion in the three-month period, also a slowdown compared with an increase of US$269.8 billion in the first quarter.

"There is a risk that weak inflation will be even more persistent than we currently anticipate," Fed Chairman Jerome Powell said earlier this month in his testimony to the Congress. "We are carefully monitoring these developments, and we will continue to assess their implications for the US economic outlook and inflation."

The current federal funds rate is set in a target range of 2.25 percent to 2.5 percent, but Powell signaled a loosening of monetary policy as he told lawmakers that concerns about the lack of momentum in global growth and uncertainties around trade tensions "continue to weigh on the US economic outlook."

CME Group's Fedwatch tool showed that the market is pricing in a 100 percent chance of a rate cut at the Fed's upcoming policy meeting on July 30-31, expecting an around 80 percent probability of a lowering of the benchmark interest rate by 25 basis points.

The GDP report came as the International Monetary Fund released Tuesday an update to its World Economic Outlook, which expected the US economy to grow 2.6 percent for full-year 2019. That is 0.3 percentage point higher than it predicted in April. The growth will moderate to 1.9 percent in 2020 as fiscal stimulus unwinds, the IMF said.

"While the headline number was strong on the back of robust exports and inventory accumulation, domestic demand was somewhat softer than expected and imports weaker as well, in part reflecting the effect of tariffs," the IMF said. "These developments point to slowing momentum over the rest of the year."

Friday's "advance" estimate is based on data that are incomplete or subject to further revision, the Department of Commerce said, adding that the second estimate is scheduled for August 29.