What's in store for the future of retailing? 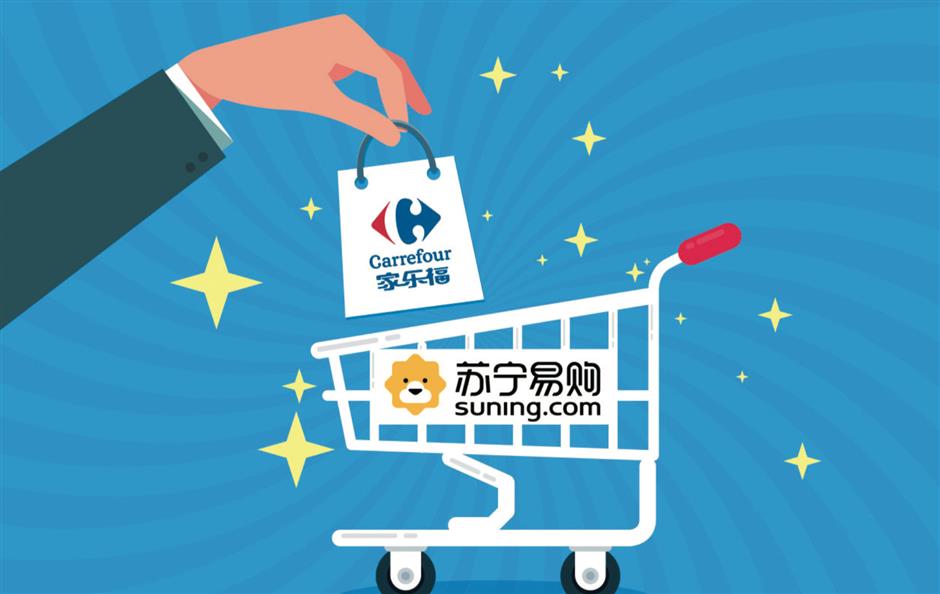 Suning’s takeover of Carrefour China highlights the shake-up in the retail sector as players shift strategies to adapt to changing consumer habits and stay ahead of rivals.

Nanjing-based Suning is paying 4.8 billion yuan (US$695.7 million) in cash for an 80 percent stake in Carrefour China, a unit of French retail giant Carrefour Group, one of the earliest multinational players to enter the Chinese retail market.

“Carrefour” in French means “crossroads,” and that’s where the Paris-based retailer found itself in the competitive China market.

As consumer demand grew for smaller shops that offer the convenience of a quick purchase, Carrefour China was relatively slow in developing mini-formats.

It had only 24 Carrefour Easy convenience stores in about 10 cities after opening the first one more than four years ago.

By contrast, Japan’s FamilyMart chain, the most popular convenience store in China, has more than 2,000 stores in Shanghai alone.

Carrefour relied on its 210 hypermarkets in 22 provinces for profit since entering China in 1995. But shifting consumer habits landed the company an operating loss of 412 million yuan last year.

Shanghai office worker Yingjie Lu said she used to shop at Carrefour regularly but has seldom gone there in the last three years. Now she increasingly relies on the convenience of food ordered online and home delivered.

For Suning’s part, the consumer electronics and home appliances retailer has long sought to branch out beyond its core business. It acquired 37 Wanda department stores in China earlier this year and changed their names to Suning Yigou Plaza.

Suning said those stores achieved an increase of 76 per- cent in sales and 40 percent in foot traffic during mid-year sales last month.

With its majority ownership of Carrefour China, Suning plans to go deeper into lower tier cities with local community stores that have the advantage of developing closer ties with their customers.

Suning is opening its own convenience chain, called Suning Xiaodian, where shoppers can inspect the quality of the fresh food and dispatch centers can be set up to deliver online orders.

Suning said its community stores will be no larger than 200 square meters and will focus on groceries people purchase the most often on a day-to-day basis.

“Carrefour’s outlets might be a good complement to dispatch groceries and fresh food to Suning convenience stores,” he said.

Fresh food is a key in retailing. Chinese people like to inspect fruit and vegetables before buying. Wet markets still flourish.

Another shopper Dong Chenyan, who lives in the Yangpu District, said there’s far less fresh food in a Suning convenience store than, say, in a Yonghui store — let alone the wet markets.

“It doesn’t look any different from other convenience stores, and I would not become a frequent buyer just because

of several discount items,” she said of Suning shops.

The stellar performance of convenience stores has been largely based on the concept that people are willing to pay a bit more if they can grab some- thing quickly and easily.

According to a joint report by Kantar Worldpanel and Bain & Co, nearly 80 percent of the food and beverages sold in small grocery stores is consumed out of the home.

Sales at convenience stores at first- and second-tier cities grew an average 16 percent in the past two years.

As of mid-year, Suning had around 6,000 small stores around China, mostly located in local neighborhoods rather than near commercial or office areas. The idea is to generate word-of-mouth in neighborhoods to bring more customers to its shops.

Some analysts have questioned whether Suning’s strategy will bear fruit in the long run.

The company still lacks powerful supply-chain management and has yet to differentiate its merchandise from other convenience stores or wet market vendors.

Online retailers Alibaba and JD.cm were early birds in realizing the importance of offline arms, but their initial forays haven’t been without problems. Yonghui operates supermarkets that mainly focus on fresh food. Selected stores called Super Species also have dining areas and a grocery delivery to nearby households. 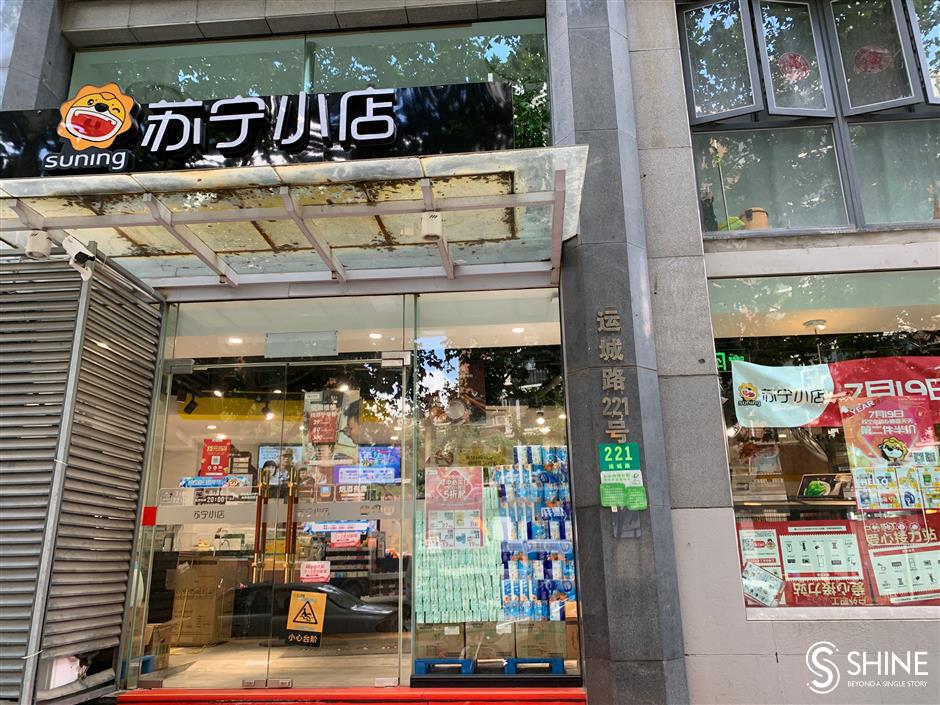 But the closure of one “Super Species” site in the Yangpu District recently had industry watchers wondering about the long-term profitability of the strategy.

JD’s physical outlet for fresh food is called 7Fresh, but its expansion has been relatively slow and is now available in just six cities, with Beijing as headquarters.

“New retail formats usually draw a lot attention in the initial stages, but retailing needs long- term, careful planning,” said independent consultant Gao Pan. “The recent adjustment of Freshippo and Yonghui might serve as a lesson for Suning as it moves into that field.”

Alibaba first introduced Freshippo as both brick-and-mortar stores and online marketplaces with deliveries to nearby areas.

Users of Alibaba’s Taobao online platform can also order groceries and fresh food to be delivered from nearby RT Mart stores, after Alibaba acquired that Taiwanese hypermarket chain.

Freshippo has been pursuing different formats since its initial launch three years ago and now has some 160 stores in 22 cities nationwide. It has gradually expanded to include groceries and personal-care goods, although its core target is still fresh food. It opened smaller formats in Shanghai and other cities to keep up its expansion pace and has added community services such as laundry and house cleaning.

The online and offline markets have been dancing around one another for years, with market leaders choosing a closer embrace that brings them the best of both worlds.

Last year, China’s online retail sales accounted for about one-fourth of 3.8 trillion yuan in total retail sales, according to the National Bureau of Statistics.

Internet retail giants have come to realize the importance of offline stores, according to He Fan, professor in the Antai College of Economics and Management at Shanghai Jiaotong University.