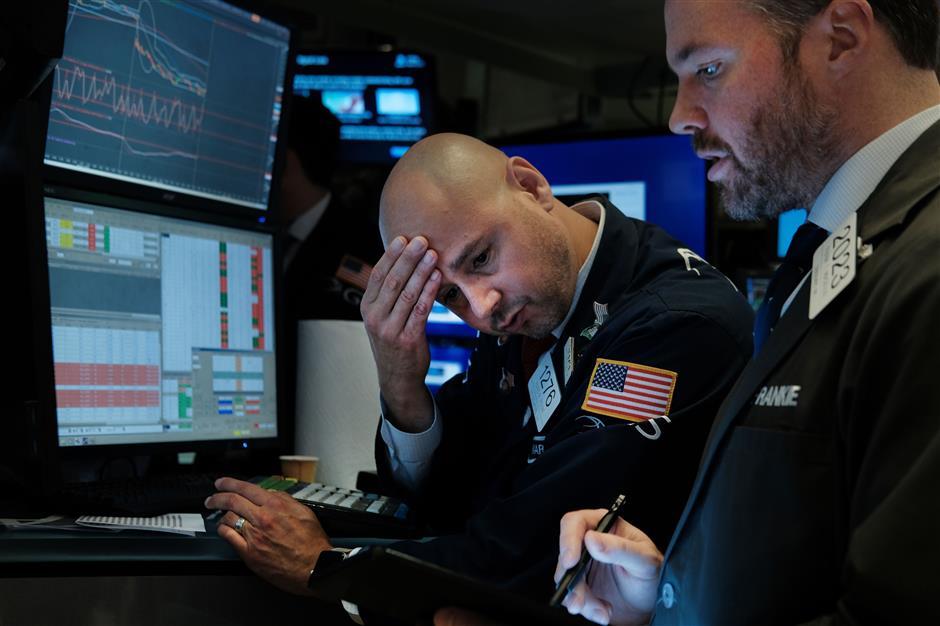 Traders work on the floor of the New York Stock Exchange on August 14, 2019, in New York City.

It was an ugly day for Wall Street, as stocks plummeted Wednesday amid worsening economic fears after US Treasury yields briefly inverted, flashing a warning sign for a coming recession.

But President Donald Trump once again blamed the Fed for the economic woes and the yield curve inversion, saying the US central bank is "clueless."

The rout followed the latest stream of poor economic data from overseas.

Shortly after the Dow hit bottom, Trump renewed his attacks on the Federal Reserve and its Chairman Jay Powell, whom Trump appointed.

"China is not our problem... Our problem is with the Fed," Trump tweeted, blaming "clueless Jay Powell and the Federal Reserve."

The Fed "Raised too much & too fast. Now too slow to cut... Germany, and many others, are playing the game! CRAZY INVERTED YIELD CURVE! We should easily be reaping big Rewards & Gains, but the Fed is holding us back," he said.

A note from Oxford Economics said the research firm's recession models as on "high alert."

"Financial conditions have tightened sharply in August," Oxford added in the note. "Following a huge bull-flattening trade, the Treasury market is pricing in expectations of slower growth, softer inflation, and increased Fed easing."

The Federal Reserve cut the benchmark interest rates last month for the first time in more than a decade and is expected to make additional cuts in the months ahead.

Trump has said he wants the Fed to cut borrowing rates by a full point.