IMF to Trump: It's not working 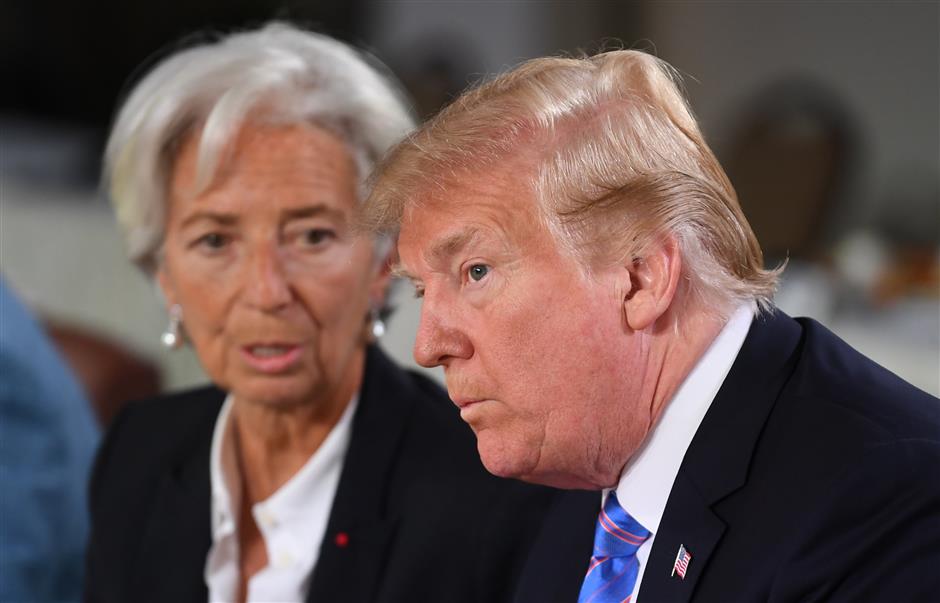 Managing Director of the International Monetary Fund Christine Lagarde (left) and US President Donald J. Trump attend the G7 and Gender Equality Advisory Council Breakfast at the G7 summit in Charlevoix in Canada on June 9, 2018.

US tariffs on China won't fix the trade deficit, and neither will weakening the US dollar through interest rate cuts, International Monetary Fund economists said Wednesday.

In unusually blunt language, the blog post seemed targeted straight at President Donald Trump who has persistently demanded that the Federal Reserve cut interest rates to weaken the US dollar and juice the economy, while imposing round after round of tariffs on China to reduce deficit he describes as theft.

But the US policy moves are counterproductive, won't achieve the desired results, and will slow the global economy, IMF chief economist Gita Gopinath said.

"Instead, they are likely to harm both domestic and global growth by sapping business confidence and investment and disrupting global supply chains, while raising costs for producers and consumers."

And any plans to weaken a country's own currency value "are cumbersome to implement and likely to be ineffective," they said, adding that pressure on the central bank will not achieve that goal either.

The authors warned that "one should not put too much stock in the view that easing monetary policy can weaken a country's currency enough to bring a lasting improvement in its trade balance."

"Monetary policy alone is unlikely to induce the large and persistent devaluations that are needed to bring that result ... especially within a 12-month period," they said.

With the US presidential election coming in November 2020, Trump is especially focused on the next 12 months.

Trump has slapped steep tariffs on US$250 billion in Chinese, goods with the remaining US$300 billion in imports targeted for new duties in two more rounds, September 1 and December 15.

With the IMF and others alerting that his trade war is slowing global growth, and as warning signs of a US recession have flashed red, Trump has doubled down on his attacks on the Federal Reserve and on China.

He and his advisers have been talking up the economy to counteract the increasing jitters on US financial markets.

At the same time, Trump has maintained his relentless attacks on the Fed, blaming Fed Chair Jerome Powell for failing to allow the economy to grow and for the strong US dollar.

In yet another Twitter outburst on Wednesday, Trump said of Powell, "Big US growth if he does the right thing, BIG CUT - but don't count on him! So far he has called it wrong, and only let us down."

"Yesterday, 'highest Dollar in US History.' No inflation. Wake up Federal Reserve. Such growth potential, almost like never before!"

The IMF blog repeats much information released in separate reports, but highlights the key points and brings them together.

While economic theory states that a weaker currency tends to make a country's exports cheaper and more competitive, the IMF notes that many products are priced in US dollars on the global marketplace.

So in reality, it argued, "US importers and consumers are bearing the burden of the tariffs. The reason: the stronger US currency has had a minimal impact thus far on the dollar prices Chinese exporters receive because of dollar invoicing."