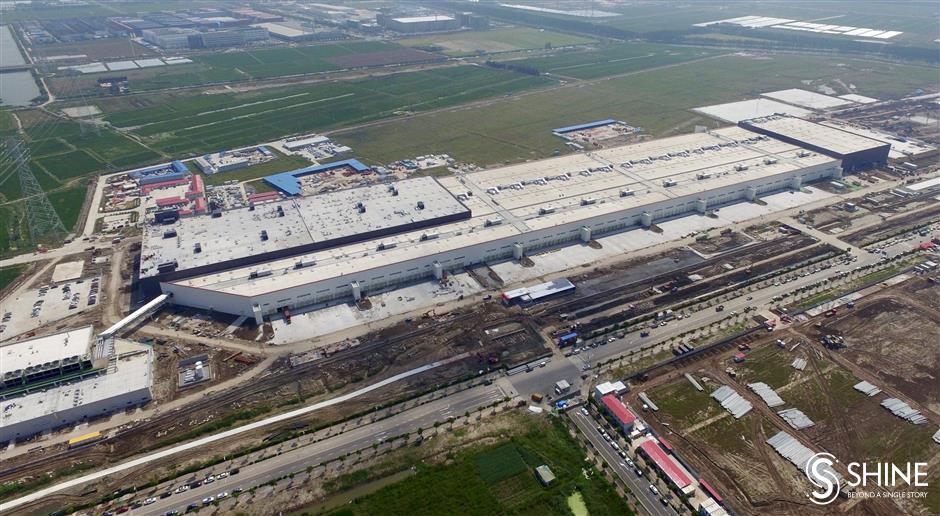 An aerial view of the Tesla Gigafactory 3 under construction in the Lingang area in September.

From the first batch of made-in-China Tesla to the first foreign-owned comprehensive hospital, the Shanghai free trade zone (FTZ) is advancing toward a higher level of openness since its establishment six years ago.

The Lingang area, the newly-launched section of the Shanghai FTZ, is "Tesla's dream city" in the eyes of Tao Lin, Tesla's Global Vice President.

Since the world-leading electric carmaker acquired a plot of land in Lingang last October, it has accomplished plant construction, equipment installation and testing within a year, heading towards the final stage of production and delivery.

The main body of the Tesla Shanghai gigafactory has been completed, and key workshops such as the stamping, spray-painting and final assembly workshops are already capable of production, said Yuan Guohua, president of the Lingang Group. The first batch of Body-in-White of test vehicles have rolled off assembly lines, and the China-made Tesla Model 3 will be delivered by the end of the year.

Tao said that Tesla, through localized procurement, will facilitate the development of the auto parts supply chain and logistics in Lingang.

The high-speed development of Tesla in Shanghai will become the norm for companies in the future. According to the Lingang area administrative committee, for the social investment industry projects, it will only take five days from the acquisition of the land to the acquisition of four main construction approval certificates in the near future.

A hit music is flowing out from the keyboard of a 6-million-yuan giant piano in the hall of Steinway Asia Pacific in Shanghai Waigaoqiao bonded area in the FTZ. Shortly after, the piano will meet its overseas buyers.

"When we first came to China, we were just a small trading company that could only sell a few pianos a year. Now we have upgraded to the Asia Pacific headquarters. Last year, we sold nearly 500 Steinway pianos," said Wang Xin, financial director of Steinway Asia Pacific.

With the institutional innovation of the bonded area, companies here enjoy trade facilitation to build multifunctional headquarters, according to Chen Yanfeng with the Shanghai FTZ administrative committee.

After expanding its offshore businesses, Steinway can sell German-made pianos directly to customers in Southeast Asia or Australia with great convenience from Shanghai.

Through expanded functions such as procurement and sales, trade settlement, and supply chain management, the Shanghai headquarters continue to enhance their resource allocation capabilities in China and global markets. Currently, there are 263 headquarters in the bonded areas of the Shanghai FTZ, accounting for nearly 15 percent of the city's total.

On September 26, Shanghai Artemed Hospital, the first foreign-owned general hospital in the Shanghai FTZ, announced its official opening, showing the comprehensive opening up of the FTZ from the manufacturing industry to the service industry.

Divided into two phases with about 500 beds, the first phase of the hospital kicked off with 200 beds, specializing in orthopedics and tumors.

Pan Feng, executive director of the hospital, said that the hospital is exploring to adopt the DRG payment system in China, which charges a fixed fee to a specific disease.

Hu Huanzhong, chairman of Shanghai FTZ International Culture Investment and Development Company, said that the institutional innovation of the FTZ has promoted the development of art trade. In 2018, the cultural trade volume of the Shanghai FTZ exceeded 40 billion yuan, increasing 15 times from the beginning.

In a complicated external economic environment, the contracted foreign investment in the bonded area in 2018 increased by nearly US$2.5 billion. The total profit of the companies in the first half of this year increased by 12 percent year-on-year.

Chen said that the bonded area will grow and progress together with the new Lingang area in the future.