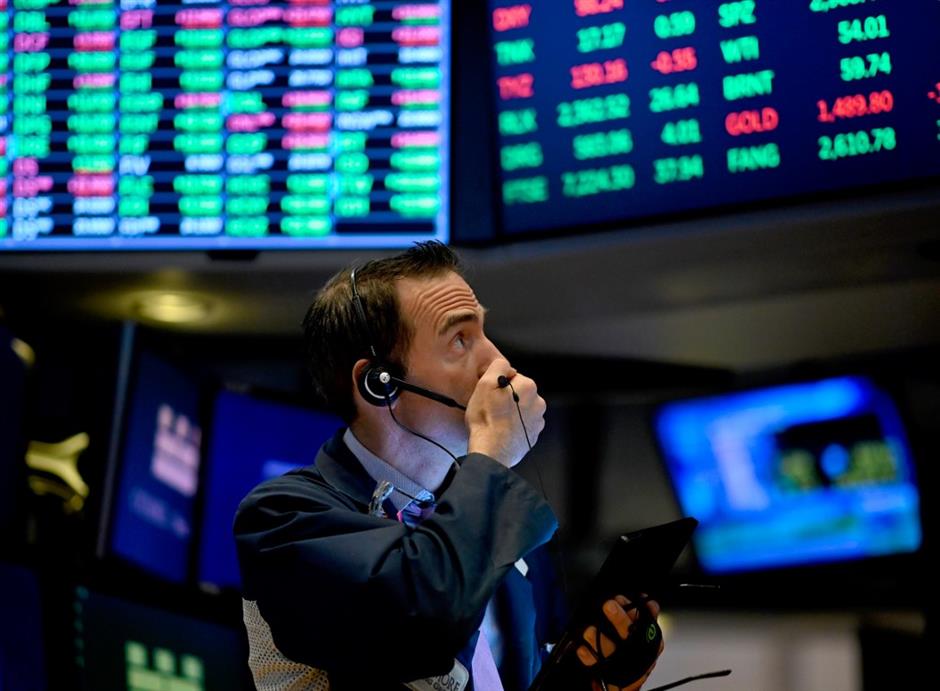 Traders work during the opening bell at the New York Stock Exchange (NYSE) on October 11, 2019, at Wall Street in New York City.

Wall Street finished Friday's session with solid gains, buoyed by progress in the latest round of trade talks between China and the United States.

Eight of the 11 primary S&P 500 sectors gained, with industrials and materials up 1.97 and 1.91 percent, respectively, leading the advancers.

"Growth-related sectors of the S&P 500 rallied, outperforming all others along with oil. Gold, which is often seen as a safe haven play sold off and treasury yields climbed," he said.

China and the United States achieved substantial progress in multiple areas after holding a new round of high-level economic and trade consultations on Thursday and Friday in Washington.

"Obviously, the market has been waiting and hoping anxiously about a trade deal with China," Peter Tuchman, an experienced trader on the floor of the New York Stock Exchange, told Xinhua.

"The market responded positively to all of that hope and the good news," he said.

Trade issues have been a big part of market anxieties since last year as they are closely related to corporate earnings.

The minutes of the Federal Reserve's September monetary policy meeting released earlier this week showed that there was a growing concern about trade tensions among Fed officials.

The US central bank also highlighted the impact of trade tensions on the outlook for the US economy.

While cheering the latest progress in trade talks, analysts also underscored the importance of further efforts to strike a deal.

The progress made in this round of US-China trade talks is a necessary step for the two sides to resolve multiple issues and offer a foundation for a big deal, Kevin R. Kelly, chief executive officer with investment intelligence provider Benchmark Investments LLC, told Xinhua.

The progress would be beneficial to those companies with operation in China by providing business certainty, Kelly said.

According to Otto, who possesses over 25 years of trading experience, sectors with strong ties to Chinese companies and growth-related groups including energy and materials would gain further if negotiations between Beijing and Washington continue to be successful.

"China and the United States represent the top two economies in the world and they have grown their trade partnership over the past 40 years," said the experienced trader, adding that continued development of bilateral ties is crucial to both economies as well as global growth.

"Our economies are incredibly interrelated," echoed Tuchman, noting that sustainable US-China trade "is a big deal for our farmers and for our production of consumer goods."

Looking ahead, market strategists said fundamentals including the Fed's policy on interest rates, S&P 500 earnings and macroeconomic data would be among the major focuses on Wall Street.

A flurry of disappointing US data released recently raised hope for easier monetary policy from the Federal Reserve.

Market expectations for a rate cut later this month were around 75 percent, said the CME Group's FedWatch Tool late Friday.