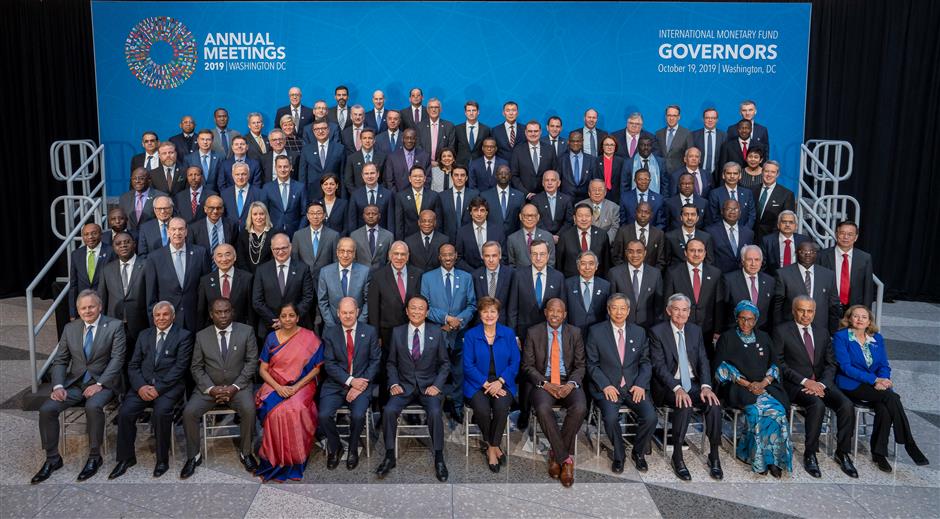 Finance ministers and central bankers worldwide called for concerted efforts to strengthen the multilateral, rules-based trading system amid global trade tensions at the just concluded annual meetings of the International Monetary Fund and the World Bank, while demanding continued progress in the IMF's quota and governance reform.

In a communique released after the 40th meeting of the International Monetary and Financial Committee, the IMF's policy-setting body, the committee said growth outlook is "highly uncertain and subject to elevated downside risks," including trade tensions, policy uncertainty, and geopolitical risks, against a backdrop of limited policy space, high and rising debt levels, and heightened financial vulnerabilities.

"Free, fair, and mutually beneficial goods and services trade and investment are key engines for growth and job creation. A strong international trading system with well-enforced rules addressing current and future challenges would support global growth," the IMFC said in the communique Saturday.

"To this end, we recognize the need to resolve trade tensions and support the necessary reform of the World Trade Organization to improve its functioning," it said.

World Trade Organization Director-General Roberto Azevedo said in a statement to the IMFC meeting that "trade tensions, combined with a wider slowdown in aggregate demand in leading economies, have taken a toll on global trade growth." After registering 3 percent growth in 2018, year-on-year growth in merchandise trade, by volume, fell to 0.6 percent in the first half of 2019.

"Easing the current tensions is thus a top priority," Azevedo said. "If we want trade to continue to play its full role in driving growth, development, and productivity, we must acknowledge the essential role that the trading system plays and commit to renewing it for the future."

In its World Economic Outlook report released last week, the IMF lowered its global growth forecast for 2019 and 2020, to 3 percent and 3.4 percent, respectively, warning that growth continues to be weakened by rising trade barriers and growing geopolitical tensions.

Noting that the main sources of downside risks are the escalation of trade and geopolitical tensions, Brazil's central bank chief Roberto Campos Neto said that "we call on the major global economies to refrain from imposing new trade restrictions."

Germany's Finance Minister and Vice Chancellor Olaf Scholz said he agrees with the IMF that "it is key" to avoid further escalation and resolve trade tensions. "In case risks materialize and global growth weakens further, we should stand ready for coordinated policy responses to avoid a sharper downturn," Scholz said in his statement to the IMFC meeting.

"Risks associated with policy missteps, including a further escalation of trade tensions, should be avoided," said Australia's Treasurer Josh Frydenberg.

"On the other hand, positive resolution of trade tensions, including on the issues underlying them, would provide a welcome relief to confidence, investment and growth."

"We remain committed to the multilateral, rules-based trading system and efforts to strengthen it should remain a policy priority," said the Australian treasurer.

Yi Gang, governor of the People's Bank of China, said "it is imperative" that all parties work together to build an open world economy by strengthening global cooperation, "resisting all forms of protectionism in trade and investment, and promoting trade and investment liberalization and facilitation."

"To this end, an immediate priority is to resolve the deadlock over the WTO Appellate Body by unblocking its member selection and appointment process," Yi said, adding that the WTO should step up discussions on emerging issues such as e-commerce, trade in services, and investment facilitation, and explore ways to strengthen the rules-based multilateral framework to adapt to the evolving world.

Another major topic at the annual meetings is the IMF's quota and governance reform, with many finance ministers and central bankers disappointed with the failure of the global lender's quota increase for emerging markets under the latest quota review, or the 15th quota review.

"This could seriously hamper the effectiveness of the IMF's role in a crisis, as the only source which IMF could rely upon with certainty is its permanent resources, i.e. quotas," said Indian Finance Minister Nirmala Sitharaman, who noted that the lack of adequate support for a quota increase is "somewhat disappointing."

The Chinese central bank governor, meanwhile, said China is "deeply disappointed" that the IMF's latest quota review failed to agree on a quota increase and a quota share realignment.

The Group of 20 summits and the IMFC meetings have made several commitments to a successful conclusion of the 15th quota review, "so that quota shares of the dynamic economies can be increased in line with their relative positions in the world economy," Yi said. "Those commitments should be respected."

"The IMF should continue to push ahead with quota and governance reforms, which are a prerequisite for the IMF to fulfill its mandate," Yi said.

Britain's Chancellor of the Exchequer Sajid Javid said "while we would be prepared to support a quota increase, we deeply regret that this prospect will not garner the support needed for approval of the 15th General Review of Quotas."

"We regret that such a solution would not deliver any realignment of quotas towards dynamic economies and therefore are open to the ideas proposed by the IMF that ensure progress towards this objective as part of timely progress with the 16th General Review of Quotas," Javid said.

Noting that India considers this as "a temporary setback," Sitharaman said she hopes the discussions in the next (16th) round of the general review of quotas would achieve success in terms of quota increase to take care of the Fund's resource adequacy.

Currently, the global lender has 1 trillion U.S. dollars in total lending resources, made up of quotas, its main source of financing and based broadly on each member's relative position in the world economy, the New Arrangements to Borrow, a multilateral borrowing mechanism that provides additional lending resources, and the Bilateral Borrowing Agreements, a further boost to the IMF's lending capacity after the 2008 financial crisis.

"We note the lack of progress on a quota increase under the 15th Review and call on the Executive Board to complete its work on the 15th Review and on a package of IMF resources and governance reforms, and to report to the Board of Governors as soon as possible," the IMFC said in a statement.

"Beyond the 15th Review, we are committed to revisiting the adequacy of quotas and continuing the process of IMF governance reform under the 16th General Review of Quotas, including a new quota formula as a guide, with the Review to be extended from 2020 to no later than December 15, 2023," the committee said.

The IMF's 14th quota review was concluded in 2010 and the quota increases became effective in 2016. After the reform, some 6 percent of quota shares were shifted toward emerging markets, including China and India.

The United States, with 16.5 percent voting power, can still veto any boost in any member's IMF quota, as any such change requires an 85 percent weighted majority vote of its members.