Visions of a digital future at city forum

Government officials and top multinational executives shared bright prospects of digital economy could bring to future development, and also shared ideas about mitigating potential risks and challenges from the rising digital economy as they exchanged viewpoints at the forum titled "E-Commerce in the Digital Era: New Platform and New Vision."

Hungary Minister of Foreign Affairs and Trade Péter Szijjártó said e-commerce is playing a vital role as it shortens time to bring distant market together, a most obvious example being that the number of Chinese travelers to Hungary jumped four times between 2010 and 2018, and that convenient payment channels and smartphone application have been put into place for Chinese tourists.

Christopher Pissarides, a Nobel Laureate in Economics and Regius Professor of Economics at the London School of Economics, also pointed out that large online platforms nowadays are also moving in the positive direction towards reduce the general cost of trade such as shipping, insurance, and financial services.

Paul Hudson, chief executive officer of France-headquartered multinational company Sanofi, added that for a health care company, it's not only about transaction opportunities it's offering, but also about the data of patients and how to leverage data connectivity to allow health care service to cover as far and as wide as possible in a vast market like China.

Italy Minister of Foreign Affairs Luigi Di Maio said his country has also been actively promoting the online to offline (O2O) model and has also been making efforts to promote Italy lifestyles and products through digital channels, and at the same time to allow small and medium enterprises to have full access to digital channels.

Participants speak during the forum titled "E-Commerce in the Digital Era: New Platform and New Vision" on Tuesday.

Jean-Paul Agon, chairman and CEO of the L’Oréal Group, noted that the booming online market in China has transformed its business in the country, and it's actively working with local digital platforms, such as a facial scanning function for those with skin acne problems through Alibaba's smartphone application where users can receive treatment advice and product recommendation online.

Cai Hongbin, Dean and Chair of Economics, Faculty of Business and Economics of The University of Hong Kong, raised the issue about the increasing income gap and the economic concentration with the rising digital super powers, while automation technologies are also replacing human labors.

Arancha González, Executive Director at the International Trade Centre, acknowledged that although the positive sides is larger than the negative sides for the time being, all parties shall join hands to respond to the issue to help the underprivileged to get back to the labor market.

"To tackle challenges such as cyber security and privacy issues all sides shall start out from a common ground instead of competition," she noted.

Alibaba Chairman and chief executive officer Daniel Zhang also commented that the company is creating job opportunities for a number of industries such as courier delivery, data mining and online influencers, a much bigger working population than its current headcount, and that being a big platform doesn't guarantee it has a carefree future as the technology upgrades happen at a faster pace these days.

He also emphasized the importance of digital infrastructure such as payment and logistics, where online and offline merchants can fully leverage these technology backbones at a relatively low cost to tap a wider consumer market. that technology upgrade would lower the transaction cost for the whole society where SME would eventually benefit. 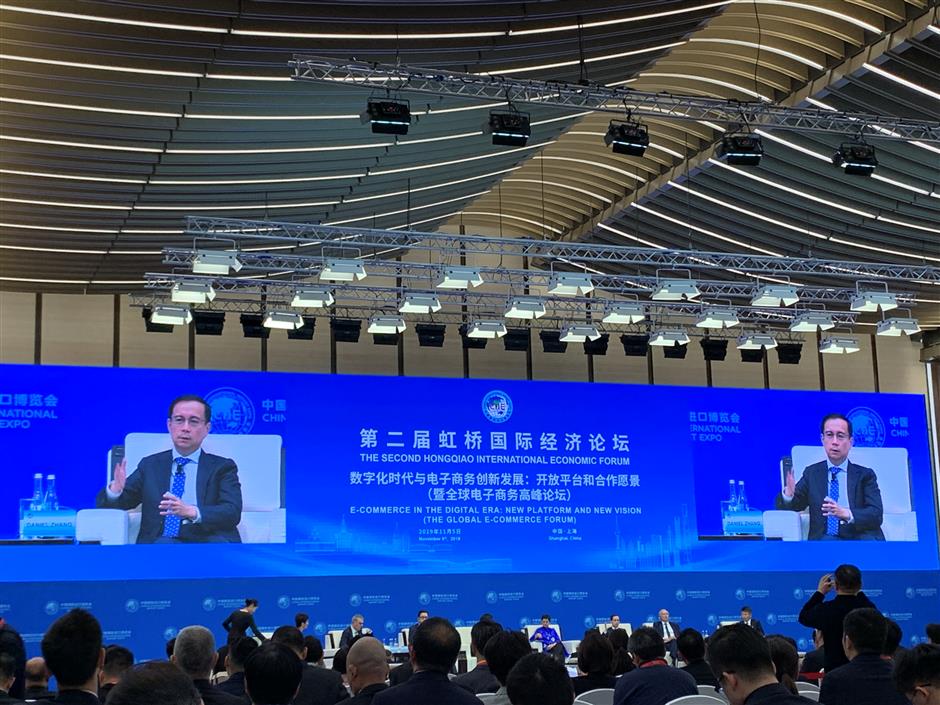