The Zhangjiang High-tech Park, which serves as a key driver behind the city’s ambition to become a global technology innovation hub, plays a unique science-driven role among all areas of the Shanghai free trade zone.

Zhangjiang is striving to leverage three key sectors — integrated circuit, biopharmaceutical and artificial intelligence — to further bolster its status as a national innovation center and support the city’s economic transformation for sustainable growth.

Zhangjiang, which mainly comprises the well-known Zhangjiang High-tech Park and nearby areas, was included in the city’s free trade zone in 2015, with a total area of 37.2 square kilometers. Leveraging its leadership in science and technological innovation, Zhangjiang is exploring a myriad of preferential policies to test new business and talent development models.

It has 1,002 high-tech enterprises, accounting for 10.9 percent of the total in Shanghai, and 11 leading science projects in China, with a total investment of 18.38 billion yuan, including the Shanghai Synchrotron Radiation Facility, the Shanghai Research Center for Quantum Sciences, the Shanghai Supercomputer Center, as well as the soft and hard X-ray free electron laser facilities.

The hard X-ray electron laser facility is the country’s biggest technology infrastructure project with a total investment of 9.55 billion yuan.

Zhangjiang has 133 national and city-level research and development institutions, accounting for nearly 11 percent of the city’s total. It has become the place where multinational companies have been stepping up efforts in recent years to set up their research facilities, as it is now home to 166 foreign-funded R&D centers, or 37 percent of all foreign R&D centers in the city.

In 2018, Zhangjiang Science City had 577 effective invention patents per 10,000 people living in the area, eight times that of Pudong and 12 times that of the city. 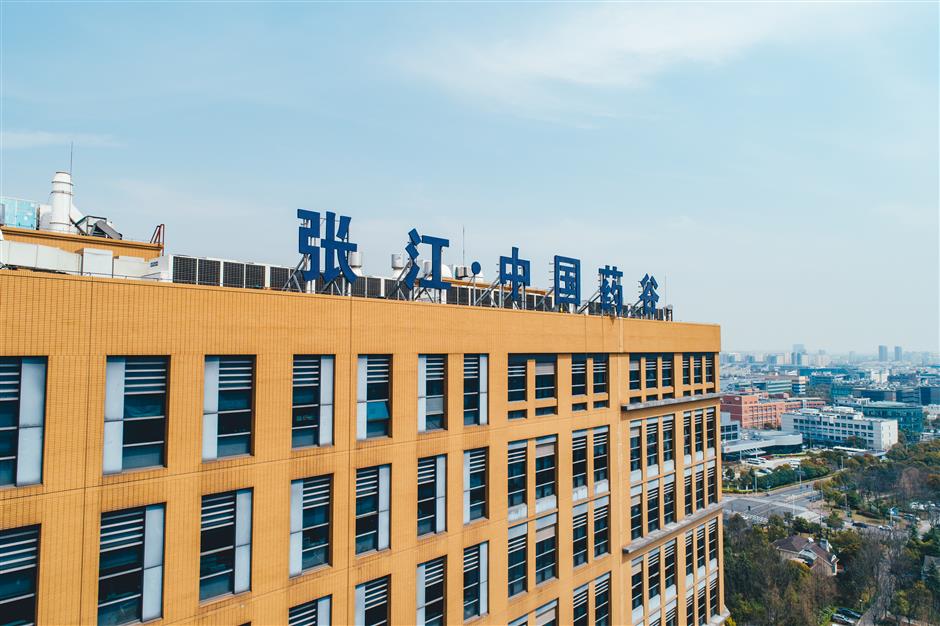 The biopharmaceutical industry of Zhangjiang chalks up industrial output of 36.5 billion yuan in 2018, accounting for 31 percent of the city’s total.

In 2018, the integrated circuit sector in Zhangjiang posted sales of 89.4 billion yuan, or 61.7 percent of the city’s total in the industry, while its biopharmaceutical industry chalked up industrial output of 36.5 billion yuan, accounting for 31 percent of Shanghai’s total. Zhangjiang has more than 90 enterprises with leading expertise in AI technology and related infrastructure, or about one-fourth of the city’s total.

Zhangjiang has become an industrial cluster that has attracted a majority of leading players in the IC sector in China, covering circuit design, chip manufacturing, assembly, testing, facilities and materials.

In November 2018, the Shanghai Integrated Circuit Design Industrial Park was launched in the Zhangjiang High-tech Park. It covers 3 square kilometers and is designed to be the world’s leading IC design industrial park.

Operating revenue of the biopharmaceutical industry in Zhangjiang jumped from 41.94 billion yuan in 2014 to 72.1 billion yuan in 2018, as it has formed a complete industry chain, covering new drug R&D, drug screening, clinical research and commercialization.

Zhangjiang is focusing on a raft of leading applications in the field of AI. In 2018, among the first batch of 60 innovative AI products, 16 were developed by 12 enterprises based in Zhangjiang.

Zhangjiang is also pressing ahead with a trial in the “Market Authorization Holder” program, which enables startup companies to file for new drug launches without their own manufacturing facilities. The program allows Chinese and foreign pharma R&D entities to leverage local contract manufacturers to produce medicines in China instead of establishing their own production lines.

So far, a total of 76 new drug registrations have been filed by 48 applicants in Shanghai under the MAH scheme. Among them, 33 research organizations in Zhangjiang filed applications for 49 new drugs.

By the end of 2018, Zhangjiang Science City had 86 incubators with more than 2,600 startups, mainly covering the IC, biopharma and AI sectors. Thanks to its size and preferential policies, Zhangjiang has lured the world’s cutting-edge technology, high-end talent and financial capital.

Microsoft, Johnson & Johnson, Intel, Alibaba and Plug & Play are among the world’s leading firms that have set up incubation centers in Zhangjiang. ABB, SAP and PwC have also been engaged in partnerships with local startups in the Zhangjiang High-tech Park to seek growth opportunities.