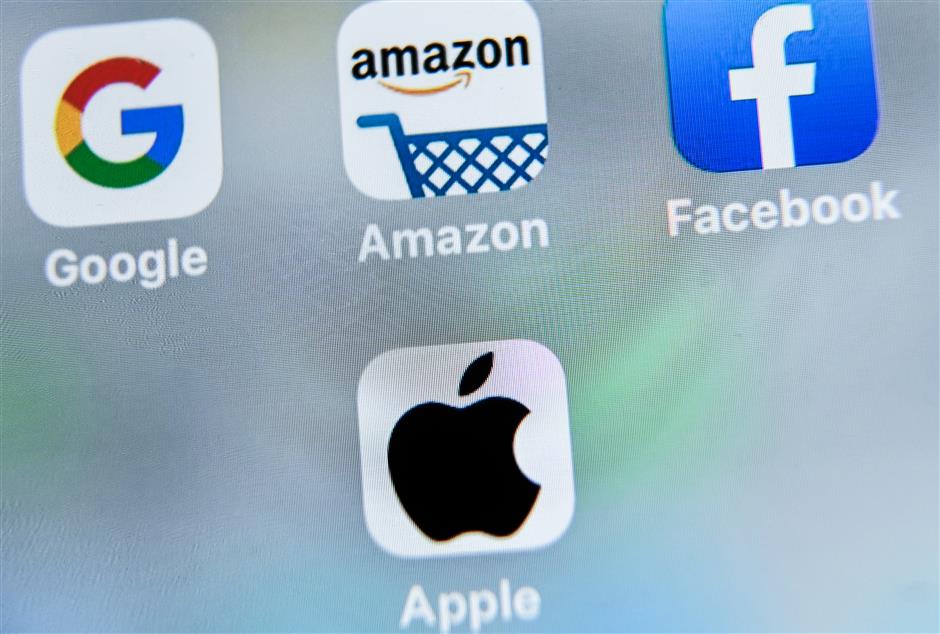 In this file photo taken on August 28, 2019, shows the logos for Google, Amazon, Facebook, Apple are displayed on a tablet in Lille, France.

US Treasury Secretary Steven Mnuchin is urging countries like France to suspend taxes on global computing giants such as Google and Amazon and wait for a negotiated agreement on international taxation, according to a letter released on Wednesday.

As the United States is poised to impose tariffs of up to 100 percent on US$2.4 billion in French products over that country's digital services tax, Mnuchin said talks in the Organization for Economic Cooperation and Development are key to resolving the issue.

"We believe that it is very important that these talks reach agreement in order to prevent the proliferation of unilateral measures, like digital services taxes, which threaten the longstanding multilateral consensus on international taxation," Mnuchin said in a letter to OECD Chief Jose Angel Gurria.

"We urge all countries to suspend digital services tax initiatives in order to allow the OECD to successfully reach a multilateral agreement," he said in the letter, which was dated Tuesday.

He said Washington would proceed quickly with plans to impose tariffs on French products, including champagne, cosmetics, yogurt and Roquefort cheese.

The decision "sends a clear signal that the United States will take action against digital tax regimes that discriminate or otherwise impose undue burdens on US companies," Lighthizer said in a statement on Monday.

The French tax imposes a 3-percent levy on the revenues earned by technology firms in France, which often come from online advertising and other digital services.

It targets revenue instead of profits, which are often reported by tech giants in low-tax jurisdictions like Ireland or Luxembourg in a practice that has enraged governments.

Lighthizer's office said it is considering widening the investigation to look into similar taxes in Austria, Italy and Turkey.

Mnuchin said there is "broad support" for providing greater certainty on taxation.

"We look forward to working with the OECD along these lines, building on the work already done."

A top EU official expressed concern this week that President Donald Trump's administration was planning to pull out of the multilateral talks, so Mnuchin's support for the talks come as a relief.

Cedric O, France's secretary of state for the digital economy, also told AFP in Washington on Tuesday that France believed there was still time to stave off the threatened of tariffs.

"The first and foremost objective that we have is to strike a deal at the OECD," he said, insisting that the current row was "not the end of the story."