Retail, manufacturing lead charge as businesses get back to normal Workers at Laird Technologies Shanghai have returned to work at its factory.

Both retail and manufacturing activities are seeing early signs of recovery as more companies resume operation amid tight quarantine measures.

Special material and thermal interface solution provider Laird Technologies said its Shanghai factory in Minhang District reopened on February 10 with more than 70 percent of its workers having returned.

“We were able to resume production earlier than some of our rivals, giving us a competitive advantage to secure more orders and we remain confident of business prospects in China," Ma Yueqiu, site general manager of Laird Technologies, told Shanghai Daily.

About 15 percent of Laird China's suppliers are local providers and 95 percent have resumed normal operation, he added.

Laird China has three R&D centers, and its Minhang factory has 10,000 square meters of factory space and 600 employees. Last year, its industrial output was valued at US$86 million, serving a wide range of companies in electronics, wireless communications and special materials.

Wyeth Nutrition was among the earliest to receive a transportation permit from authorities for trucks in the Yangtze River Delta region to allow delivery of its products.

Its four warehouse and logistics facilities in Suzhou, Guangzhou, Chengdu and Tianjin resumed operation on February 10, and now have restored 90 percent of delivery capacity. 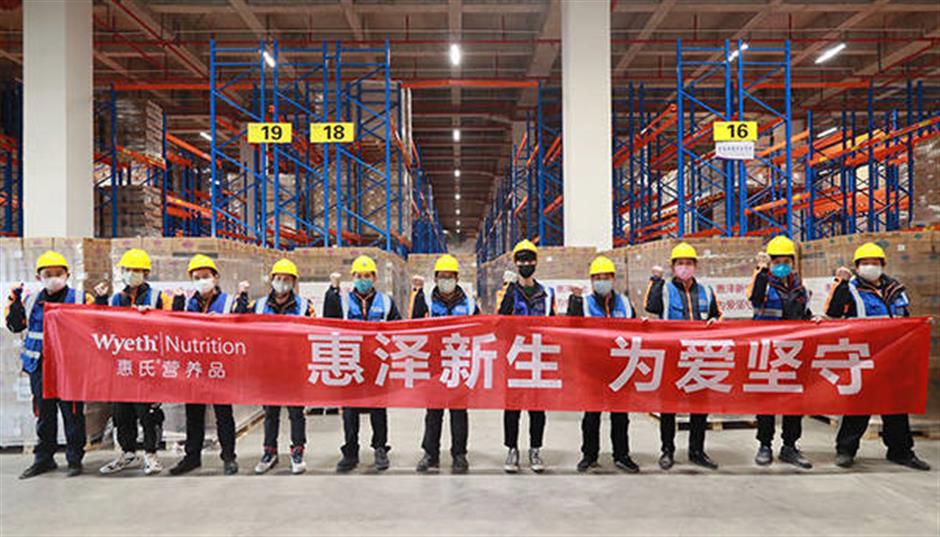 More than 90 percent of Starbucks stores in China are currently open for business and it expects approximately 95 percent to resume operation by the end of March.

These stores have implemented precautions including limited lobby service, minimal café seating and use of mobile ordering for contactless service through pickup and delivery.

Starbucks CEO Kevin Johnson said in an open stakeholder letter that the company estimates comparable store sales in China for the first quarter to be down 50 percent versus a year ago, but there are also early signs of a recovery with sequential improvements in weekly sales.

In the last fiscal week of February, total weekly gross sales of Starbucks in China grew 80 percent from a week ago with average daily transactions per store improved 6 percent.

Some planned Starbucks store openings will likely be deferred to the next fiscal year starting September.

JD said new registration for corporate purchasing customers on its rewards and benefits platform doubled in the past month, with protective material and hygiene products still the best-selling items.

Financial, automobile and dining are the three industries with the highest proportion of businesses having resumed normal operations.

An initiative proposed by the All-China Federation of Industry and Commerce was joined by more than 100 commercial banks including major lenders as well as industry associations.

Director of the Institute of Digital Finance at Peking University Huang Yiping noted that lack of cashflow is now a major challenge for small and medium-sized companies.

"It's crucial at this moment to offer more inclusive digital financial services to support individual business owners to resume operation as soon as possible," he added.

An estimated 39.5 million merchants and 92 million individual business owners were forced to suspend business in the first two weeks of February, with losses of 264 billion yuan (US$38 billion) over the period, based on a study using previous payment data by the Institute of Digital Finance at Peking University and the research unit of Ant Financial.