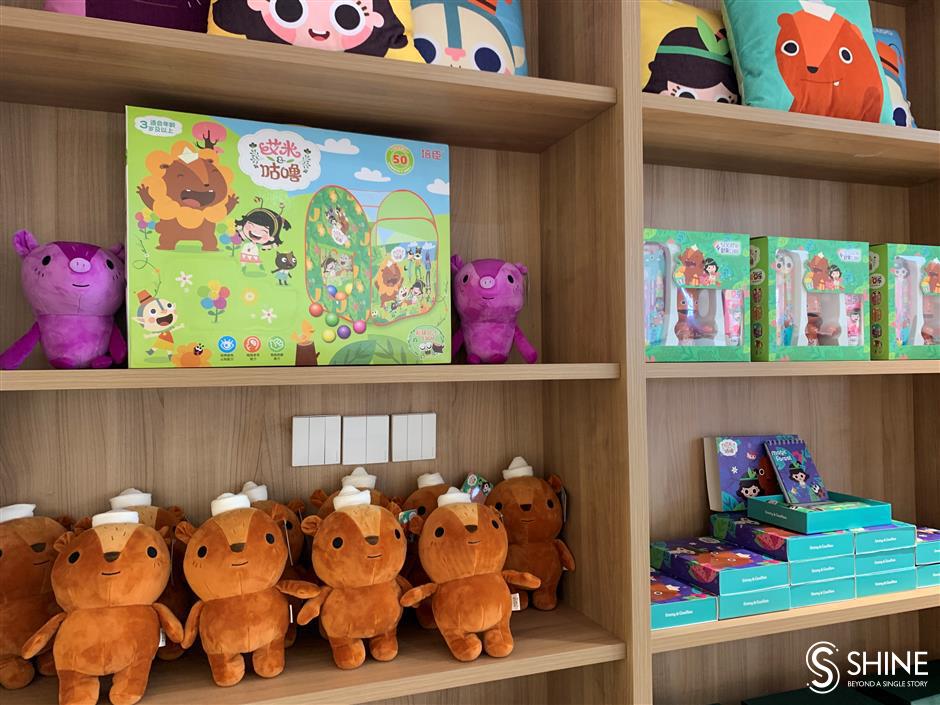 Shanghai Left Pocket Animation Studio Ltd's derivative products based on its original animation work "Emmy and Gooroo" on display at its headquarters in Songjiang District.

Shanghai's cultural production companies are adapting to new market trends and viewers' habits after previous programs were put on hold amid the coronavirus pandemic.

Shanghai Left Pocket Animation Studio Ltd has been quick to adapt to the viewing habits of children and middle school students.

"We have found that emerging demands such as online education and extracurriculum interest lessons offers us an extra channel to distribute our works," said Yu Xin, founder and CEO of the company.

One of its latest productions, a 40-episode series featuring the nature, was launched on the teenagers section on video-streaming site Youku after just two months in production.

Previously, planning, production and distribution of an animation series could take from a year to 18 months but with the restrictions on commercial collaboration, the company is shifting focus to smaller productions which would take only months.

Left Pocket was founded in 2012 and has been focused on original animation and cartoon production as well as commissioned works from other companies.

Overseas trade conferences, cartoon festivals, the development of derivatives and even potential business collaborations have been put on hold amid the global outbreak.

"We've learned that there's a high demand for elements related to the nature as children were told to stay at home in the past months so we will leverage our existing figures to create new topics and formats," Yu said.

Currently, more than 90 percent of its 100-plus staff in Shanghai have returned to work.

The picking-up of paid digital content and the popularity of online courses gave the company fresh opportunities to expand its offerings not only in video but also in audio formats.

"It brings us more monetization and commercial possibilities under this special circumstance and we're actively learning from feedback from our audience to optimize future work," Yu said.

Collaboration talks for cartoon derivatives and co-branding products are also under discussion.

The company is also working with a local tech company on a face mask with cartoon figures for children which will be available in the near future.

Online training sessions and topics involving elements of the nature are in high demand after students adopted online learning.

The company has been offered assistance from district authorities and also received hundreds of thousands of yuan in special subsidies as a cultural enterprise to replenish its cash pool last month.

Shanghai is home to audiobook platform Ximalaya FM and video and livestreaming site Bilibili, which were also offering online education audio and video content as well as other formats of digital leisure activities.