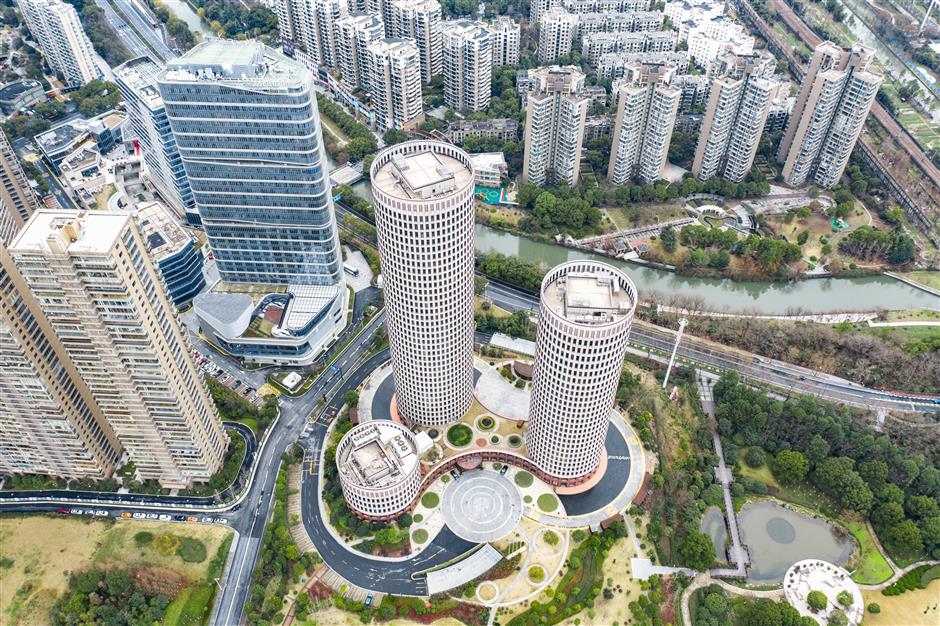 Covering an area of 92 square kilometers, Hangzhou High-Tech Zone (Binjiang) will become one of the world’s top-class high-tech areas by 2035, capable of competing with counterparts in other cities, such as Zhangjiang High-Tech Park in Shanghai and Zhongguancun Science and Technology Park in Beijing.

Hangzhou has set a 2020 gross domestic product growth target of 6.5 percent, Mayor Liu Xin said in his government work report at the opening of the Fifth Session of the 13th Hangzhou People’s Congress recently.

The per capita disposable income of urban and rural residents will rise 7.5 and 8.5 percent respectively this year. Spending on research and development is about to account for 3.5 percent of GDP.

A number of measures were decided at the meeting to achieve the targets.

In the coming months, Hangzhou will deepen the regional integration of the Yangtze River Delta with Shanghai. The new theme of “R&D in the Zhangjiang area, manufacturing in Hangzhou City” aims at building a bridge between the two cities in terms of industrial resources.

Hangzhou government will also revive tourism industry which has suffered a great loss due to the outbreak of COVID-19. Since the border area of Hangzhou and Anhui Province has an abundance of tourist attractions, local governments will further collaborate in integration of tourism resources.

According to the work report, COVID-19 prevention will last for a long time. Official departments must establish a fixed working system to ensure that all confirmed and suspected cases, asymptomatic cases and close contacts are traced to block the spread of the virus and eliminate loopholes in COVID-19 prevention and control.

As infections caused by imported cases and cross-infection have reoccurred lately in northeastern Heilongjiang Province, Hangzhou authorities called for efforts to enhance the capability and widen the range of COVID-19 testing. Now, large-scale nucleic acid and antibody tests are available in most downtown hospitals.

Economic recovery is a major part of government work this year.

To lighten the burden on businesses and ensure stable economic growth and employment, Hangzhou government will persist with Qinqing Online, a platform designed to bring government departments and companies closer, and the Cloud Land platform which makes it possible to review a piece of land through 360 degrees and find out details online. Entrepreneurs can bid on the land and sign contracts through the platform.

An official from Hangzhou’s Fuyang District livestreams the countryside delicacies of Xinsha Island.

There will be policies to promote the digital transformation of key industries, and the construction of new digital infrastructure will be sped up to facilitate the development of 5G, data centers and the industrial Internet.

Hangzhou government will continue to support Binjiang District in developing high technology. It is hoped that the district will become one of the world’s top-class high-tech areas by 2035, capable of competing with counterparts in other cities, such as Zhangjiang in Shanghai and Zhongguancun Science and Technology Park in Beijing.

Culture highlights will include protection of the Qiantang River seawall and the Southern Song Dynasty imperial palace. The government will continue to build cultural venues in villages and hamlets for performances, public readings and study.

In a bid to help less-developed areas in Zhejiang Province, the provincial government launched the “Coordination Between Mountain and Sea” plan in 2001.

Over the past 19 years, Hangzhou has expanded its strategic influence and forged new business partnerships with Quzhou and Lishui cities in western Zhejiang’s hilly areas.

According to the work report, Hangzhou will continue economic cooperation with the two cities by allocating more technological, industrial and innovative resources and talent.

Currently, the Hangzhou-Quzhou high-speed railway is under construction. After its completion, a metropolitan area within one-hour travel time will be formed by the high-speed railway network, accelerating the development in this area.

This year, Hangzhou government has already assisted Enshi and its farmers in selling produce through booming livestream platforms. In the coming months, more assistance projects will be launched, covering thousands of people from poverty-stricken areas.