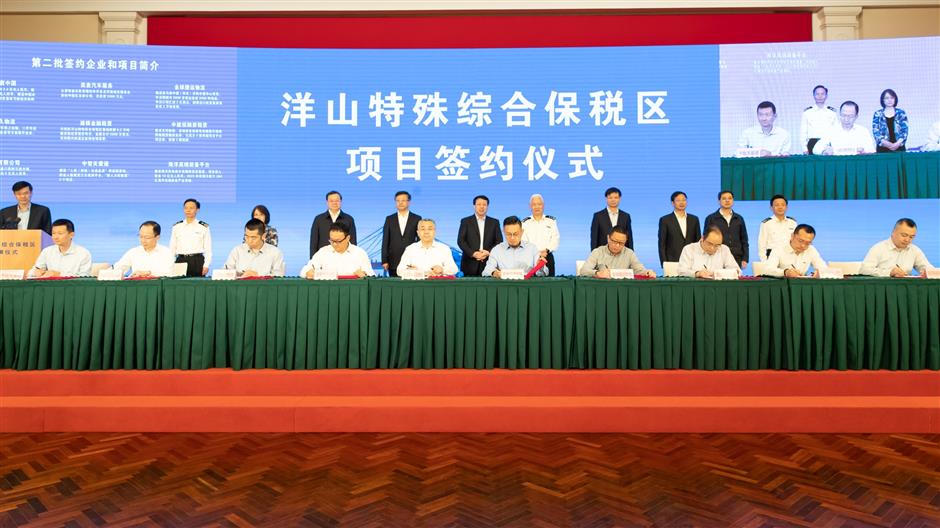 The first batch of 18 new projects are signed at the ceremony on Saturday, witnessing by Shanghai Acting Mayor Gong Zheng.

Since the State Council approved the establishment of Yangshan Special Comprehensive FTZ on January 17, 2020, the General Administration of Customs had earnestly guided Shanghai authorities in the planning and construction of the area.

The Yangshan FTZ, as the only special comprehensive bonded zone in China, undertakes the important mission of pushing forward all-round high-level opening up in a deeper, broader and more vigorous manner, said Li Guo, Vice Minister of the General Administration of Customs of China.

The designed area in Phase One occupies 14.27 square kilometers. It covers the main industrial activity areas that have already been in operation within the planned area of Yangshan Special Comprehensive FTZ.

The enclosed operation within the scope of the Phase One area can be conducive to the implementation of special regulatory measures for the zone as soon as possible, said Shanghai Vice Mayor Chen Yin. It will provide a more internationally competitive regulatory system environment and preferential policy support for enterprises in the zone.

Chen also noted that it is of great significance for enterprises to better cope with the adverse effects brought by the COVID-19 pandemic, and to turn the crisis into an opportunity to improve their competitiveness in international markets.

"In the next step, we will accelerate the promotion of function cultivation, industrial agglomeration, facilities upgrading, system innovation, and build the most competitive special customs supervision area in the international market," Chen said.

For example, Shanghai authorities will soon issue the development plan and corresponding supportive policies for industries in the special zone, aiming to further accelerate the industrial and functional conglomeration.

Meanwhile, the area will make efforts to build a high-standard intelligent port and waterway infrastructure system, among which, Yangshan Phase IV automated terminal will raise its throughput capacity from the current more than 3 million twenty-foot equivalent units to 6.3 million TEU.

The area will also fully carry out the policies and systems specified in the overall plan of the Lingang  area, as well as the 50 special supportive policies on promoting high-quality development and various industrial policies issued by the administrative committee of the Lingang Special Area.