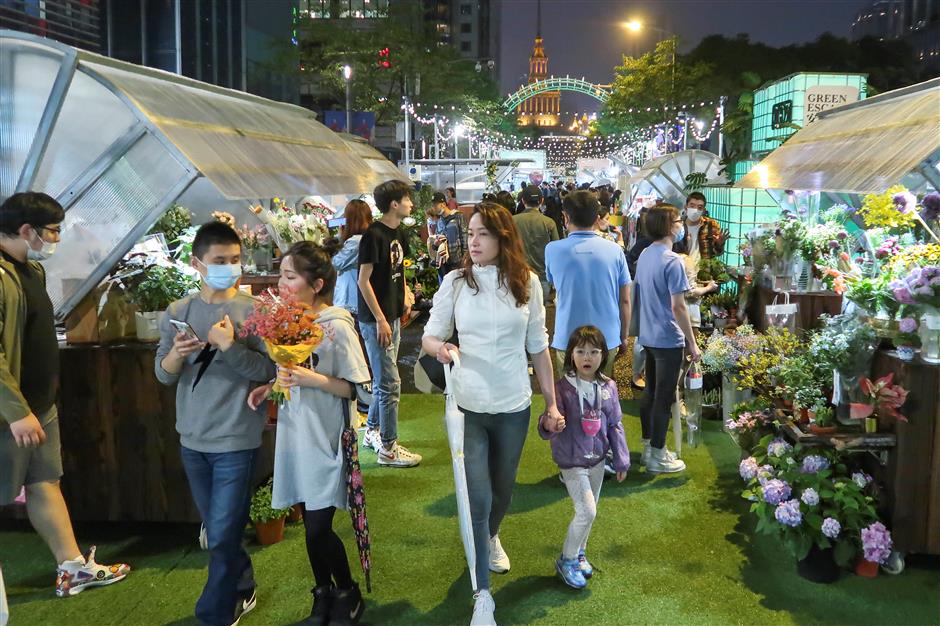 The popular Green Escape street night fair on Anyi Road, hailed as the trendiest of its kind in Shanghai, reopened last weekend.

The Shanghai Night Festival from June 6 to 30 will feature over 180 activities that will include shopping, food, leisure and entertainment.

A number of measures, including public transport and Metro line extensions at weekends and holidays will be in place to support the festival, along with temporary parking spaces.

“We will support pedestrian malls to be set up during a limited period over the weekend and will offer relevant policies. At the same time, we will make proper planning to make nightlife activities more attractive to boost the city’s night economy," said Liu Min, vice director of the Shanghai Commerce Commission.

Hosted by the commerce commission, Shanghai Cultural and Tourism Bureau and the Shanghai Press and Publication Administration, the festival will encourage major retailers in key business areas, such as Jing’an, Yangpu, Xuhui and the Pudong New Area, to stay open to 11pm.

"The Night of Bailian" event, organized by local retail conglomerate Bailian Group, will cover all kinds of leisure activities and entertainment formats in addition to late night eateries. It is also planning outdoor cinemas at selected shopping malls and a techno party at the TX Huaihai Youth Energy Center.

Thirteen of the group’s outlets and department stores will open until 11pm, and nightlight decorations will be staged across the city.

It will offer coupons worth 500 million yuan (US$70.4 million) through Alipay, covering some 600 local hypermarkets, convenience stores and department stores.

More than 300 of Sinopharm Group’s Guoyao drugstores are offering a 24-hour drug delivery service through Alibaba's Ele.me service, and it also has an integrated online inquiry and prescription function.

Top social and lifestyle services sites such as Meituan Dianping, Xiaohongshu and Douyin will stage livestreams on the trendiest spots in the city and will work with commercial authorities to rank the best places.

Freshippo stores are extending their opening hours to midnight this Saturday and offering discounts for crawfish, beer as well as other fresh food for online orders between 8pm and 12pm.

Huangpu urban management authorities have worked with the Bund Financial Center mall to turn the 15-meter Fengjin Road a pedestrian mall at weekends.

It will feature eateries, entertainment and late night bars.

The Sinan Mansions area is hosting a nightlife event that features food stalls, art exhibitions and other cultural events every weekend this month.

More than 460 local bars will have drink deals.

Ye Dingyuan, chairman of the Shanghai Bar Association, said Shanghai's night economy had gradually recovered, with average sales in April and May at local bars adding nearly 18 percent compared with a year ago.

"There's pent-up demand for nightlife since March especially for young people and visitors from out of town, and most bars posted better-than-expected recovery thanks to gradually loosened government quarantine requirements," Ye said.

Around 30 museums and six art galleries in Shanghai will extend their opening hours from June 6 with the launch of nighttime art and cultural tours, the Shanghai Administration of Culture and Tourism said.

"During their night opening, various cultural activities such as exhibitions and lectures will be held," said Cheng Meihong, deputy director of the administration.

Discounts on some cultural and innovation products will be offered at night.

"These activities will bring a unique night tour experience to residents and tourists and enable them to savor the beauty of culture," said Cheng.

It will string together the major tourist attractions of Qingpu District and the Hongqiao area, featuring sightseeing, shopping, culture, markets and catering, Cheng said.

A 12-hour webcast on the beauty of Shanghai will be held on June 6, according to the administration.

Online and offline activities and livestreams on the city's countryside tourism, museums' magic tours, and night delicacies and consumption are also on the agenda, it said.

An intangible cultural heritage shopping festival will run from June 13 to 25, and online activities such as webcasts will be hosted.

Night street fairs and festivals will also be held in Baoshan, Putuo and Minhang districts and Xuhui is staging a cycling event.