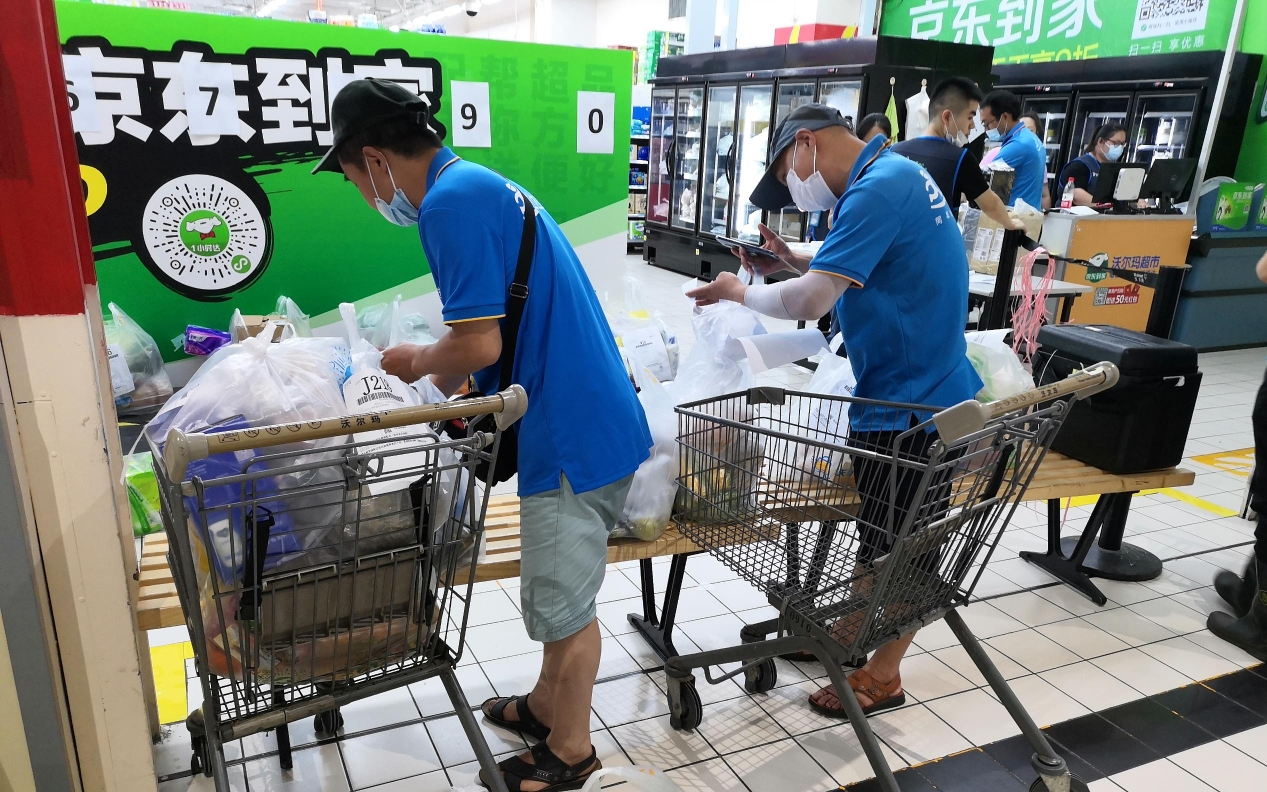 Online merchants and brands have seen a rebound in spending on consumer goods and electronic gadgets after offering big discounts.

Among them is home appliance vendor JD which marked the anniversary of its founding in Beijing on June 18, 1998 with its deepest discounts of the year.

It extended its promotional campaign to cover June 1 to 20 in recent years, and many major online retailers also leveraged the occasion.

Tmall said sales in the first hour of June 18 doubled from the same period last year.

Around a million caterers and food vendors joined in on Alibaba's local services affiliate Ele.me.

Suning staged a five-and-a-half-hour entertainment show on Wednesday night with transactions made during the livestreaming sessions totalling 5 billion yuan. Apple, Midea, Gree, Haier and Huawei were among the top selling brands.

The number of online orders dispatched by its Dada delivery unit jumped 73 percent over the period, as it offers delivery for JD as well as other online orders of supermarkets and physical stores.

In the past 12 weeks as of mid May, e-commerce sales maintained a strong performance with a value growth rate of 42 percent while sales through hypermarkets, supermarkets, and convenience stores dipped 1 percent.

Oliver Wyman's principal Chen Wen said: ”It’s never been so important to stimulate consumption given the coronavirus epidemic and brands that usually do not actively participate in such events will also join the event to reboot sales and make up for losses during the epidemic."

But he also said the actual impact of the consumption rebound remained uncertain as consumers were using the promotion to stock up on daily groceries.

Online channels have become an essential platform for new launches and also complement the loss of physical store sales.

Adidas said it expects second-quarter sales in China to be around the same level as last year, with the drop in foot traffic offset by a rise in online spending.

It recently launched a tie-up between the Adidas Originals brand and fashion designer Sankuanz while its sports performance series launched new Climacool running shoes fit for sports lovers in the summer.

The global debut of the Dyson Digital Slim vacuum was staged in Shanghai earlier this month.

Since Dyson first opened flagship store on JD in 2013, annual sales have jumped more than 300 times and it also used livestreaming on JD to promote its products.

The company said it has benefited from the local government's encouragement of new product debuts and had fully leveraged talent, supply chain and retailing capabilities and research efforts to gather consumer feedback to include local features.

It has also seen an increased interest in home hygiene after the coronavirus outbreak and intends to pursue more local innovations to cater to that trend.

As delivery demand picks up during the promotional period, the Shanghai Consumer Rights Protection Commission has urged major courier firms and online retailers to streamline their delivery and dispatch processes.

They also pledged to use better packaging to cater to the demand for fresh food deliveries and to enhance oversight to prevent loss or damage.