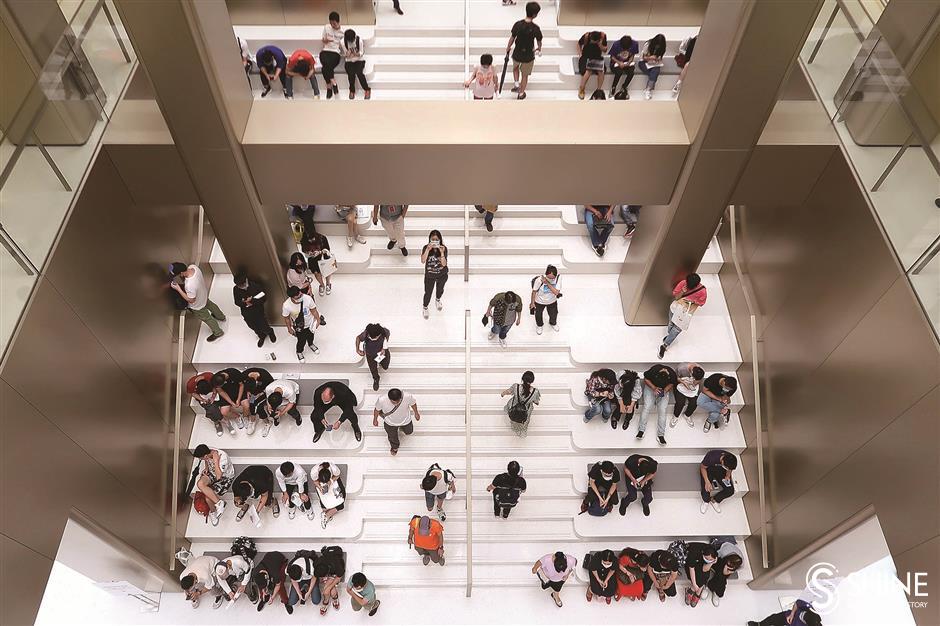 A huge “corridor” that spanns three stories is seen inside the new Huawei global flagship store. People can sit on the stairs of the corridor, enjoying a casual break.

So many shops along the popular Nanjing Road Pedestrian Mall sell digital gadgets, but Huawei’s global flagship store there stands out because of its customer intimacy.

On my two visits to the store, I was struck by the trust and honesty the shop exudes.

I had been planning to visit the new store out of curiosity ever since its grand opening on June 24, but I was deterred by the large crowds.

My first visit was accidental. My Huawei phone had developed some problems connecting with my watch, and the memory card didn’t work.

One Friday after work, I happened to pass by the store and saw no long queues, so I went inside.

It is a stunning place, covering three stories in a building constructed in 1935 by British real estate tycoon Silas Aaron Hardoon. Huawei products — from smartphones, tablets and wearables to television sets and various other consumer electronics — are on display, showcased in an orderly style that allows consumers to try out the items.

What impressed me most on that day, however, was a huge “corridor” that spanned three stories. People were sitting on the stairs of the corridor, enjoying a casual break.

My mission that day led me to the after-sales services department on the third floor. There were no counters there, but rather a large wooden table seating several young shop assistants.

I explained my problem, and one of the staff instantly reconnected my phone and watch with a reboot of the devices. Then he told me my memory card had broken down.

My mission was completed in less than five minutes. When I went to pay, the assistant told me, with a shy smile, that there was no charge. He also gave me a card-reading device free, in case I needed to test a new memory card.

When I walked out of the shop that day, I felt as if I had been treated like a friend, not a customer. 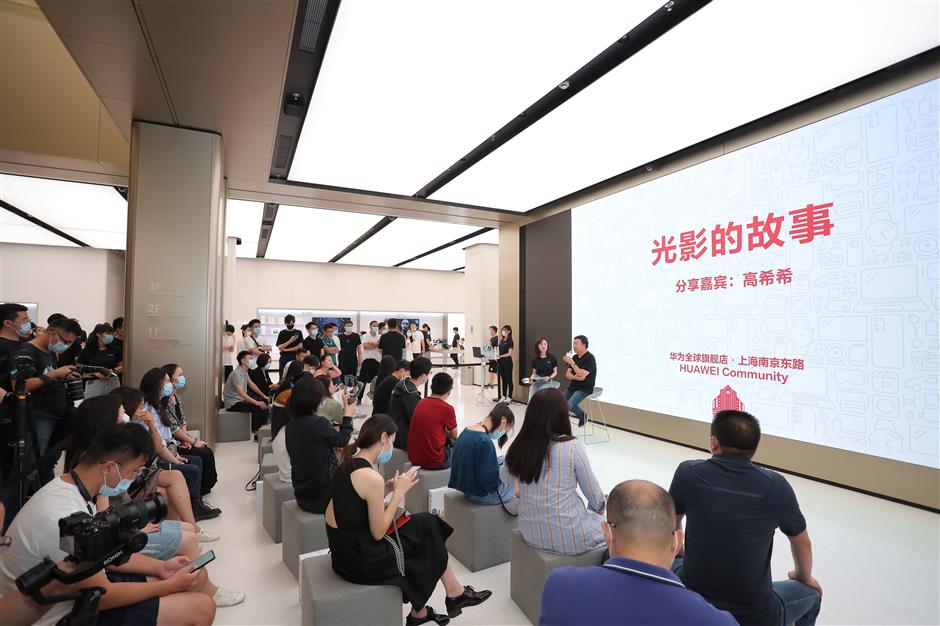 Gao Xixi, a famous director of movies and TV series, shares his insight over telling stories with a camera in the Huawei's new store, which targets beyond sales and revenue only. “It connects consumers, developers and local artists, and also, it connects history, art, technology and the future,” said Herman Zhu, chief marketing officer of Huawei’s consumer business group, in an earlier interview.

Last weekend, I was invited to the store — this time as a reporter — to meet Gao Xixi, a famous director of movies and TV series. He was giving a talk on how to tell stories with a camera.

The talk was held in that huge “corridor,” and most of the audience seemed to be passers-by in the shop.

The feeling of intimacy was enhanced. I began to realize the confidence Huawei had shown in setting up a store right beside those of Apple and Samsung.

Even in a difficult time when strained relations with various countries have harmed Huawei’s business, the company is still willing to spend heavily on promoting its brand and connecting with consumers.

Later, I learned that the shop has been nicknamed the “city guestroom.”